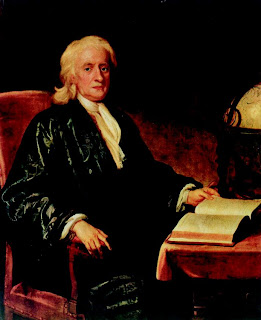 Newton, Sir Isaac (1642-1727),
mathematician and physicist, one of the foremost scientific intellects of all time. Born at Woolsthorpe, near Grantham in Lincolnshire, where he attended school, he entered Cambridge University in 1661; he was elected a Fellow of Trinity College in 1667, and Lucasian Professor of Mathematics in 1669. He remained at the university, lecturing in most years, until 1696. Of these Cambridge years, in which Newton was at the height of his creative power, he singled out 1665-1666 (spent largely in Lincolnshire because of plague in Cambridge) as "the prime of my age for invention". During two to three years of intense mental effort he prepared Philosophiae Naturalis Principia Mathematica (Mathematical Principles of Natural Philosophy) commonly known as the Principia, although this was not published until 1687.As a firm opponent of the attempt by King James II to make the universities into Catholic institutions, Newton was elected Member of Parliament for the University of Cambridge to the Convention Parliament of 1689, and sat again in 1701-1702. Meanwhile, in 1696 he had moved to London as Warden of the Royal Mint. He became Master of the Mint in 1699, an office he retained to his death. He was elected a Fellow of the Royal Society of London in 1671, and in 1703 he became President, being annually re-elected for the rest of his life. His major work, Opticks, appeared the next year; he was knighted in Cambridge in 1705.
As Newtonian science became increasingly accepted on the Continent, and especially after a general peace was restored in 1714, following the War of the Spanish Succession, Newton became the most highly esteemed natural philosopher in Europe. His last decades were passed in revising his major works, polishing his studies of ancient history, and defending himself against critics, as well as carrying out his official duties. Newton was modest, diffident, and a man of simple tastes. He was angered by criticism or opposition, and harboured resentment; he was harsh towards enemies but generous to friends. In government, and at the Royal Society, he proved an able administrator. He never married and lived modestly, but was buried with great pomp in Westminster Abbey.
Contributed By: Alfred Rupert Hall
"Sir Isaac Newton" Microsoft® Encarta®. Copyright © 1998 Microsoft Corporation.

For the Scientific Revolution, when again Europe was at a crossroads, I chose someone who encompassed just about all the different aspects of science. His works in mathematics and astronomy (optics and gravity) are perhaps best known, but he also dabbled in chemestry, history, theology, and philosophy.

Questions: A) Since all of modern technology is based on Calculus, what do you think the modern world has done of your science? B) Could you clear up the controversy between you and Leibniz over who first came up with the concept of Calculus? C) As a man of strong faith, do you think more should be done today to reconcile differences between science and theology? D) Now settle for all time, did the apple hit you on the head or did you just see if fall?
Posted by P M Prescott at 10:48 AM

Great questions to ask Sir Isaac. Especially the last one!

An argument can be made that Newton was the last alchemist - much of his 'research' was alchemical... his discoveries regarding the nature of light, gravity, mechanics, and math were achieved - well, begun - during his "annus mirabilis", 1666. E.T. Bell has speculated that the apple story was invented to have a quick reply ready for the 17th-century equivalents of dumb-as-dirt journalists.

"Tilting at windmills". I write my blog (al Qaeda in Albuquerque) for myself - it's a convenient mechanism to vent my frustration and anger at the the current Administration. If you believe more folks ought read it, please: recommend it! (it'd fun to have more readers!... but again: i write only for myself.)

... on the downside: in the past few years i've taken up the venerable pastime of letter-writing. i'm sorry to say that the blog has distracted me from this noble endeavor! (i've still two more-or-less reliable correspondents.)

Back to Newton:
Question B): Newton would almost certainly answer than Leibnitz plagiarized the Calculus. From what we know, Newton seems to have been a very jealous man, little tolerant of rivals. Historians of math seem willing to admit that the idea of the Calculus was in the air, awaiting fertile soil - which it found in both Newton & Leibnitz. Newton probably had a slightly better notion of what he was doing, but Leibnitz's notation won the day. It took Cauchy to put limits on a firm foundation.

A fun read: Euler: the Master of Us All, William Dunham. Also, The Calculus Gallery: Masterpieces from Newton to Lebesgue,
William Dunham. The chapters on Newton & Leibnitz are close to unreadable - math & math notation had not caught up to their ideas; they were, after all, pioneers. The chapters on Euler thru Weirstrass are more-or-less readable. Thereafter the math gets really hard, but the motivating problems are fairly easy to appreciate.

Question C): I'm not sure that Newton would have understood the question. "Differences between science and theology" would not have registered: he was an intensely religious man, and would likely not have perceived a disconnect between his science & his theology - both were directed to understanding G-d. He would likely not have appreciated Laplace's "Reputed reply to Emperor Napoleon I, who had asked why he hadn't mentioned God in his discourse on secular variations of the orbits of Saturn and Jupiter": "Sire, I had no need of that hypothesis."

Unknown said...
This comment has been removed by the author.
8:39 PM

In praise of the plague!

Newton was forced into seclusion 1665-66 - his annus mirabilis - because of plague raging in London and Cambridge.

I've been trying to keep the bios on these interviews rather brief and left out much of the information you provided on Alchemy and the other aspects of Newton's life. A mutual friend forwarded an e-mail to me today. Cryptically I'd like to say it's nice to know someone else who appreciates the number 1066.

A professor of Philosophy of mine in college died very young and at his funeral, one of his colleagues read from his favorite...Leibniz.