Enjoying the time off

Had another pleasant round of golf yesterday, hope the weather stays this nice all week.
Bought a fancy stereo that records vinyl LP's and 45's on CD's. Starting to do lots of recording the few months -- it's going to take time to record the treasure trove that's been gathering dust for years. 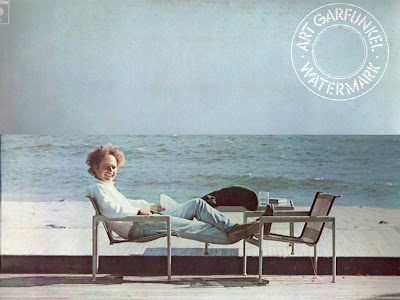 The first album I recorded was Art Garfunkel's Watermark. It's not available anywhere on CD or to download, and it has always been one of my favorite albums. It will be nice to listen to it again in the car or elsewhere.
The two record set 4 Seasons Story has been on its side in the entertainment center for so long that one edge was flattened. Two songs can't be recorded, one of them is Dawn, which is a shame, but the other 26 songs are coming out nice.
Grinnygranny should enjoy recording all her Elvis, and Barbra Streisand albums. She has around 50+ of Elvis that she hasn't listened to in some time as well as all her Partridge Family ones. Does this date us?
Way back when, we thought LP's were long playing, but when you have to stay close to the recorder to stop it and flip to the other side it's amazing how short they seem today, when you can record you computer or stereo to play for hours and even days at a time. It will record as one track for each side, if you want to have each song on a separate track you have to hit a split track button during the space between songs. Makes it kind of hard to multi-task.
I can answer the question everyone has about why old men have their pant tops practically up to their armpits. I just bought a nice jogging suit (on sale for a song) but the @#$%# pant legs are so long that if I don't want to trip I have to fold them up or pull the top up to my chin. Not everyone plays in the NBA!
Posted by P M Prescott at 2:39 PM

OK, when you and your wife visit the gallery, I'll know you right off--your pants will be hitched up to your armpits.

All I need to know is the address. If you e-mailed it to me I must have missed it. I'm getting a lot of regular mail getting sent to bulk as spam. Grinnygranny and I are planning on going up this weekend just to get out of town.

I did email it, but here's the address again: 219 W. San Francisco

Thank you, sorry I missed it. Looking forward to seeing you.