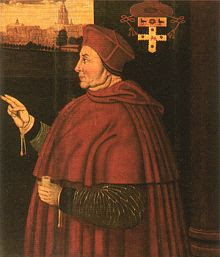 Cardinal, Archbishop of York, b. at Ipswitch, the usually accepted date, 1471, being probably three or four years too early; d. at Leicester Abbey, 29 November, 1530. His father, Robert Wulcy (or Wolsey), was a man of substance, owning property in Ipswich, but it is not known that he was a butcher as commonly reported. The cardinal himself always wrote his name as "Wulcy". He was educated at Oxford, where he took his degree at the age of fifteen, winning the title "the boy bachelor". About 1497 he was elected fellow of Magdalen, and after becoming M. A. was appointed master of the adjoining school. [Catholic Encyclapedia]
Instead of going into a lot of details on Cardinal Wolsey I thought I would summarize my college paper on him. My premise on Wolsey was that most people get caught up in all his accomplishments, and they were many, but what makes Wolsey important in World History is really his failures. The crossroads England and Europe faced concerning the Reformation and Henry VIII's troubles with siring an heir still have ripple effects today.
Wolsey's three failures were: 1. Becoming Pope. He came close, but the French pulled their support at the last minute. Had he been Pope Henry would most likely have received his annulment and England would have stayed Catholic. 2. Henry being elected Holy Roman Emperor. Diplomatically Wolsey nearly pulled this off, but Carlos I of Spain wins the election to become Charles V, the man who then surrounds the Pope's castle and pressures the Church into not granting the annulment. 3 Obtaining the annulment.
All other accomplishments by Wolsey are negated by these three failures. If he had succeeded in any one of these endeavors England stays Catholic, and who knows what would have happened at that point. English Civil War would have happened in a different way, Mary I would not have had to burn so many people at the stake, there would have been no Glorious Revolution, no English Bill of Rights, and perhaps no American Constitution and Bill of Rights. England might have respected the Pope's wishes and never colonized North America. Idle speculation perhaps, but just think of the possibilies had Wolsey obtained any one of these objectives.
Questions: A) Had you been elected Pope, would you have cleaned up the excesses that caused Luther's break with the Church? B) How differently would you have dealt with Henry had he been elected Holy Roman Emperor and you were Pope? C) Once you were equals would you have fought with him or helped him? D) The big Queston, the one all historians still scratch their heads over, why didn't you use your power of Papal Legate A La Terre to grant Henry's annulment when he asked for it instead of going through all the rigamarole that led to England' break with the Church and your downfall?

Thank you for leaving a comment on my blog...that was very sweet of you!

I'll be back to read more of yours...it's very interesting!