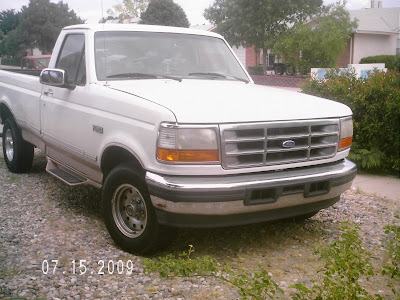 Well I tried facebook. I said hi to a few alums from Wayland, but one guy became so obnoxious pushing his real estate business, and other than saying hello to everyone else it wasn't worth the hassle.
I also dropped out of the pro-am tournament. Threre's just too much going on right now to try and do everything.
Posted by P M Prescott at 8:41 AM 3 comments:

I've signed up for my first golf tournament. It's a pro-am and I still don't know who the pro will be that I'll be playing with, but this week I'll need to be out on the driving range, and working on my pitching and putting so I don't make a complete fool of myself.

My one loyal reader and commenter, Michael Manning, has an excellent post concerning the risk factors of heart attacks and strokes for women on his site. Well worth the read for everyone.
Posted by P M Prescott at 11:30 AM 2 comments:

I finally did it.

I've been dragging my feet for some time, but Saturday at Southwest Writers a number of members said that Facebook was a good place to advertise your books. So I opened up a facebook site. It's amazing how many Wayland grads are on it and I've gotten back in touch with after nearly 30 years. No so much luck with high school friends. I'm still trying to get used to the ins and outs of it.
Posted by P M Prescott at 6:57 PM 2 comments: 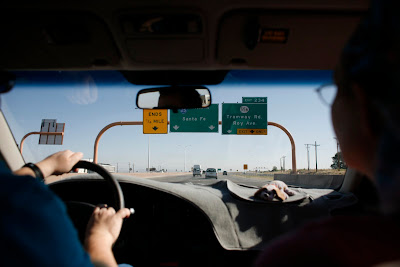 Last July Penni wanted to come back to New Mexico. She knew her time was growing short and needed to visit our Dad's grave. The previous August she drove out here for his funeral, but spent that day in the hospital with a bowel blockage and had to be medevaced back to Texas. The Dallas Morning News was running a seried of articles on Palliative care and she was one the patients they were following. For this trip they sent a staff photographer, Sonya N. Hancock with video and still cameras.
After flying into Albuquerque they spent the night in a hotel. I loaned them (Penni, David, Michelle and Sonya) my little Elantra for the trip to Santa Fe. I drove up with them in my Windstar with Mom, Linda, Melissa, and Eddie.
First stop was the National Cemetary in Santa Fe. 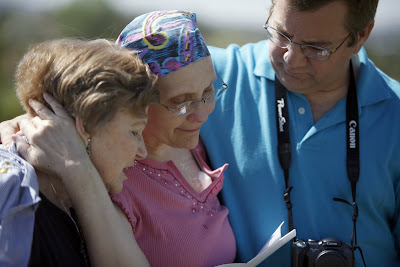 Penni with Mom and her husband, David. 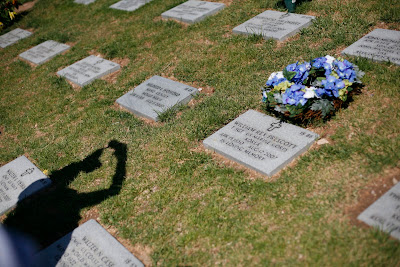 After letting Penni spend as much time as she needed, we then drove to the Santa Fe Plaza.
We parked by a clothing store and did some shopping. 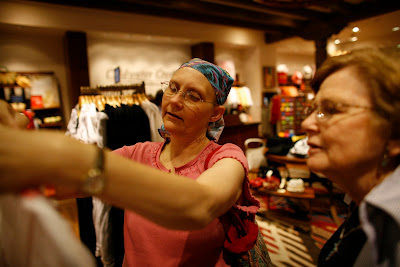 After buying a few items we headed towards the La Fonda Hotel to eat in their restaurant for some green chile. 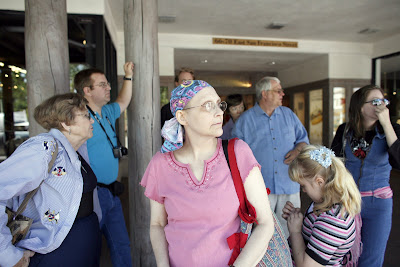 After a nice lunch we took a leisurely stroll through the Native American vendors that have been selling their wares here for three hundred years. 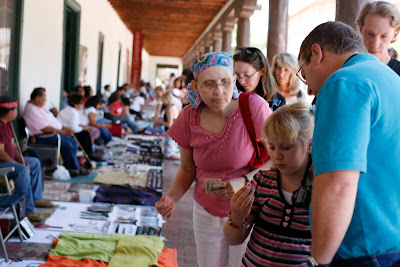 Sonya then treated all of us to ice cream. 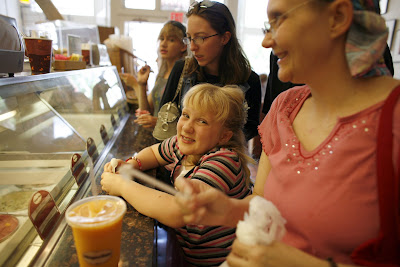 Leaving Santa Fe we then drove to Glorieta prayer gardens where Penni and David were married. (Aside, fittingly while we were holding our service and spreading Penni's ashes around the Cross that is behind the gazebo in this picture there was a wedding taking place at the same time.) 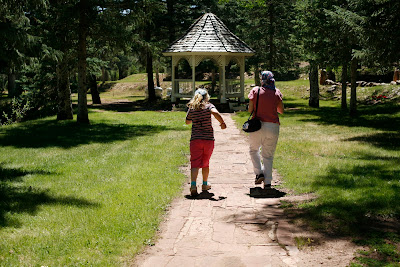 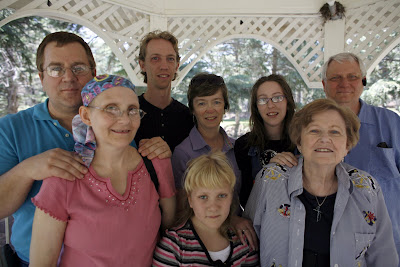 All of us in the Gazebo.
We all headed home, but Penni wasn't ready to head back to the hotel. On the way back they decided to go up the Tram which goes from the base of Sandia Mountain to the Crest. 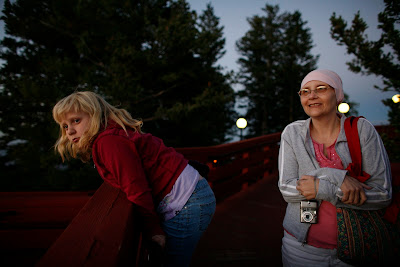 Penni and Michelle looking out over Albuquerque from the top of the mountain.
They stopped by my house and spent some time with Richie who stayed home with Christina and Daniel. 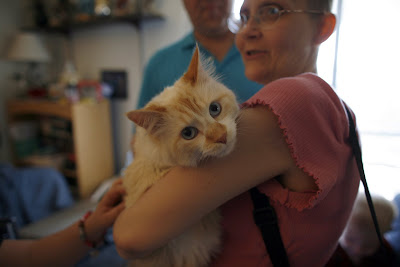 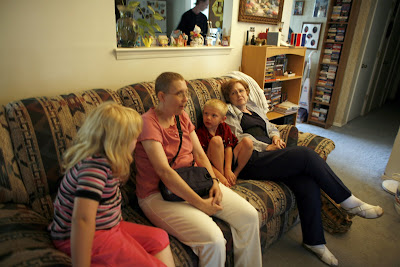 The hardest part of the day was saying goodbye. 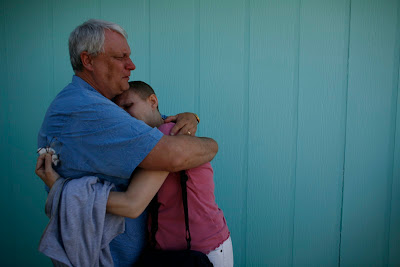 We recently received these pictures on a disc from Sonya and copies of the special reprint of the five part series the Dallas Morning news printed from Dec. 14-21, 2008.
These are a very few of the more than 600 pictures Sonya took over a six month period for this special. 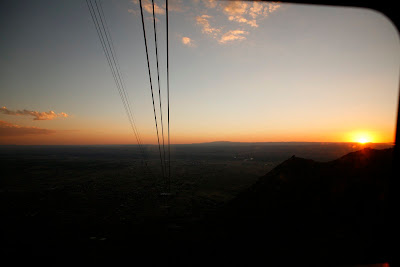 A long day over. Penni's wish fulfilled.
Posted by P M Prescott at 10:35 AM 4 comments: 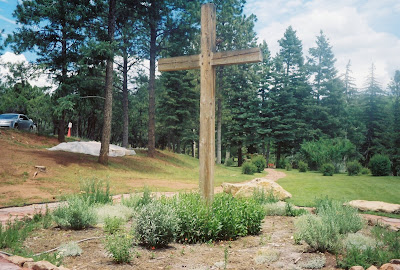 The bench was placed around the cross instead of the gazebo at Glorieta. Actually a better location as a place of contemplation and prayer. 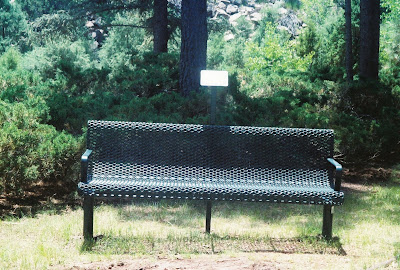 This is the bench with the plaque. May it be used for much prayer and contemplation. 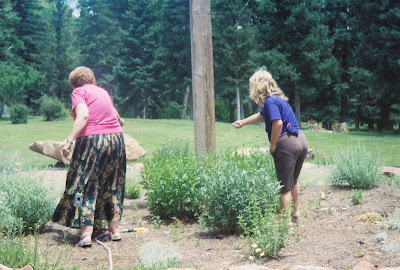