Took a "tag you're it" trip to Santa Fe. Had to hand deliver a letter to someone concerning a case Attorney X is working on. Here's a tip, never trust a google map. Had to buy a map at a gas station to find the place.
I've been running ragged taking papers out to Rio Rancho's courthouse. Twenty miles out and another 20 back. Air conditioner works good in the car, but the heat still gets to you. It's nice going into a quaint little courthouse that's not filled with people hustling and bustling. I just hate the drive.
I don't know what got into me on the last story I published. Normally I write R rated stuff to add a little spice, but the characters in this story were a lot randier than normal. It seems to be getting a lot more hits on smashwords than my more tame stories. Perhaps there's a lesson to be learned.
Publish America has lowered the price of the softcover of Optimus: Praetorian Guard from $27.95 to $12.95. There's still the PAper back for $9.99, and they lowered the e-book price down to $7.95. Amazon last time I checked had the kindle edition still at the 27 buck price tag, but it should be coming down soon. I expect PA will hike the prices back up after the first of the year, so if you don't own a copy and want one, now is the time to buy.

Perk starting to pay off

Volunteering at a golf course is starting to have its benefits. Had a nice round of golf Tuesday and today got wife out for nine holes.
Saw a rabbit take off running and a red tailed hawk swoop down from a tree. The rabbit dropped in a hole and the hawk sailed to another tree not missing a beat. Nature is awesome some times.
Posted by P M Prescott at 8:08 PM 2 comments:

Wife's work had a retreat and we stayed at a local hotel for two nights. Nice room, had the pool all to ourselves Friday afternoon while everyone else went shopping. Banquets Thurs & Friday nights and on Friday morning seminars. Banquet rooms need better chairs. Sitting through the presentation over three days in those chairs is nearly deadly.
The couple that presented had good skits and a well needed message. Friday night we saw the movie Courageous from Sherwood Baptist Church that did Fireproof. It will have a theatrical release in September. It's an excellent movie with lots of humor to break up the more serious parts.
Dropped the wife off Sat morning and did 5 hours as a marshall on the golf course. Strip club had a tournament, but it was more about a bunch of guys with a girl or two seeing how much beer they could guzzle. Course made a mint on the booze.
Came home took a quick shower and we went to the Isotopes game which had a fireworks night. 'Topes were up 20-7 at the end of the 4th inning. The only thing that kept the crowd there was the fireworks. We only go to the Isotopes once or twice a summer. Before they built the new stadium and when the kids were little going to the Dukes was a cheap form of entertainment. You could park in the outfield for little money and tailgate. They had family night coupons and you could take in your own cooler and parking was free.
Now it's 5 bucks to park, you have to buy drinks and food there, tickets are still fairly reasonable, but the whole experience is not the bargain it was with the Dukes.
Needless to say I spent most of today napping trying to recover. I have to marshall for 5 hours again tomorrow. What I have to do for free golf, only after putting in the hours as a marshall I haven't had the time to get out there and golf for free.
Posted by P M Prescott at 8:34 PM No comments: 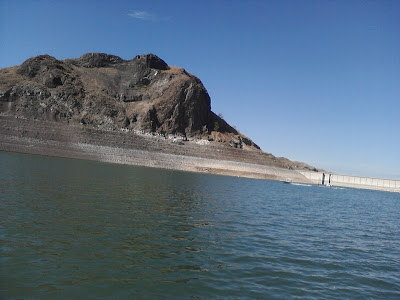 Took a trip with the churc to Elephant Butte Lake over the weekend. If you stretch your imagination that butte does look like an elephant.
A good time was had by all. The lake is really low, but that didn't stop lots of people from ski-doing, fishing, skiing and swimming.
Campers next to where the friend with the boat were next to caught a 20 pound bass with thier skido. They hit it and pulled it up with their hands as it bobbed up and down stunned. An interesting way to catch dinner.
Posted by P M Prescott at 9:27 AM 2 comments: