Another Day for Memories

Life is going on

Faithful fellow blogger Michael Manning left this comment on my last post:
An excellent and timely post, PM. Christ wasn't into politics. He cut to the core and held steadfast to being grounded in love. He didn't care for labels. I once had breakfast with a buddy of mine from England and he asked me. "Where do we get all these labels? Tories? Labor? Conservatives? Democrats?" I told him that I wave off this media circus--including "the dimwit from Alaska" who isn't worth commenting on. I do not hate her. She needs therapy. She and others like her are all immersed in ego on both sides of the aisle. I think for myself while these various groups are so smug to believe they have the inside track to Jesus. They don't. His message is so simple. "Follow me". What I see both parties doing is spending day after day beating the hell out of one another and nothing more. They have failed us. If they were employed in a job like the rest of us, they would be fired. Christ was about serving. I ask this: Do these politicians have a spirit of serving others? I don't think so. They should be "serving" the needs of the American people who elected them. Those who fail, like our own Governor in Arizona (a travesty) must be voted out. But correct me if I'm wrong, PM. Christ stayed clear of this baloney and kept focused on serving. This message is lost on Washington. Which is why I have no faith in politicians or labels. It's going to be up to young people who enter public service with the correct mind set. Namely, to serve others. That's what Christ did. I'd welcome your view.
Michael I agree with whole heartedly on politicians. Take Jesus out of the issue, which is what the Constitution did by restricting the use of any religious test for the holding of public office, and the first amendment prohibiting the establishment of any one brand or type of religion. Politics should be religious neutral and religion should be personal not national.
Let's look at what in my view is the criterion by which a voter should use to choose an appropriate candidate:
Posted by P M Prescott at 10:35 AM 2 comments:

On My Soap Box

Mike Lux at Alternet got me thinking today. He has an article entitled: Why are so many Christians Conservative?
Which is a very good question and his insights are well reasoned:
if you actually read the Gospels, it is clear that Jesus' main concern in terms of the people whose fates he cared about was for the poor, the oppressed, and the outcast. Comment after comment and story after story in the Gospels about Jesus relates to the treatment of the poor, generosity to those in need, mercy to the outcast, and scorn for the wealthy and powerful. And his philosophy is embedded with the central importance of taking care of others, loving others, treating others as you would want to be treated. There is no virtue of selfishness here, there is no "greed is good," there is no invisible hand of the market or looking out for Number One first. There is nothing about poor people being lazy, nothing about the undeserving poor being leeches on society, nothing about how I pulled myself up by my own bootstraps so everyone else should, too. There is nothing about how in nature, "the lions eat the weak,"
Concerning how Conservative Christians defend their belief system he says:
I have never talked to a conservative Christian about economics and not heard them quote this verse) is the one time in which Jesus says that "the poor will always be with us." The reason they love this quote so much is that they interpret that line to mean that in spite of everything else Jesus said about the poor, that since the poor will always be with us, we don't need to worry about trying to help them. Apparently since the poor will always be with us, we can go ahead and screw them. But Jesus making a prediction that there will always be oppressive societies doesn't mean he wanted us to join the oppressors.
I've dealt with the conservative mindset all my life in Baptist Churches. For the first thirty years of my life there was an acceptance of differing opinions and fellowship prevailed. In 1978 when the thugs marched in and took control of the convention for twelve years there was a fight for the soul of the convention and the thugs won by as Russell Dilday, one of the casualties of this war said, "Using satanic practices." He caught a lot of flack for that statement, but when the winning side used slander, deception, and illegal means to remove him from the presidency of the largest Baptist Theological Seminary in the world, which at the time had an enrollment of over 5,000 students compared to todays less than 3,000. He was right. Thugs don't play by the rules of Christian Charity.
Fundamentalists may call themselves Christians, but they have long forgotten who and what Jesus was and stood for. They have their fire insurance guaranteed by John 3:16 and that's as far as it goes. For the rest of it they are cultural Christians that will believe anything a preacher says. Two hundred years ago God sanctioned Black Slavery. They conveniently forgot the Levitical law that all slaves be freed after seven years. Today we have a culture of greed. Ebeneezer Scrooge has replaced Jesus as their theologian, and they wonder why all the money in the world still makes them cold, barren and sour?
I look on the face of the Republican front runner for Governor in our state's primary election coming up. He boasts of being a Reagan Republican (his opponent was recently endorsed by the Alaskan Dimwit). He is the most bitter looking individual I've ever seen running for office.
I remember when Gary Johnson was elected governor sixteen years ago and the Repugs controlled the state for eight years. Every time I went up to the round house all you could feel emanating from the committee rooms and chambers was how mean spirited it was.
Look at the faces of those in the Tea Party. Don't they look like they were raised on pickle juice?
Posted by P M Prescott at 9:32 AM 3 comments:

Life of anything but leisure

Too Close For Comfort

Woke up this morning to news that tornados hit Norman, Ok. Naturally since Bruce lives there we were worried. I checked his blog. He has a video of the marina on Thunderbird lake one mile from his house that was demolished, but it skipped him. Good news that he wasn't harmed, our prayers go out to those not as fortunate.
Posted by P M Prescott at 6:30 PM 2 comments:

Mom came over and we drove down to Bosque Farms for church. It was the first time Mom's been down there, but she enjoyed it very much. When the service was over she talked to Michelle in North Carolina. Penni's husband is planning on driving out here this summer and she'll be able to spend some time. Mom's happy about that too. A good Mother's day for her.
We came back to town and had lunch at our favorite noodle place with E and his family. It makes for a pretty large group. The food is good and it's nice for all of us to sit around and spend time together.
The church gave all mothers a nice potted flower plant. Some kind of lilly. Mom and Grinnygranny seemed very pleased with theirs.

Here's hoping all the mothers out there are having a good day.
Posted by P M Prescott at 4:37 PM 2 comments:

Anne wanted me to check on the artwork she put on consignment at a coffee shop in Old Town. All of her work is still on the walls.
Grinnygranny had yesterday off so we went down to see and walked around some of the shops. It's been years since we've walked around the place since it's basically a toursit destination. GG had to go to the Cat Shop, but we were saddened by the lack of product. It's clear the store is on it's last legs. In fact many of the stores appear to be hanging on by only a thread. One of the byproducts of an economic down turn. It could be that its a month before the peak tourist season. There are some shops there that have fantastic art. Not all of it the kind you hang on a wall. Lots of pottery, t-shirts, mugs, metal work, jewelry... Silk scarves with very intricate pattersn seem to be popular.
We bought a few items, it is possible to find some things under ten dollars. It was actually a nice break from just going to a mall and walking around.
Posted by P M Prescott at 8:53 AM 4 comments: 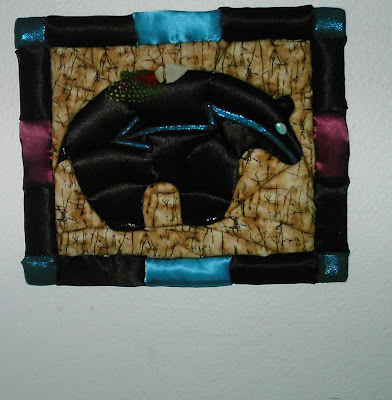 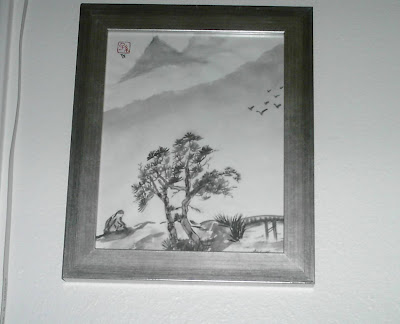 Then one of Mom's numbers was called and she picked an abstract sky scene with dark clouds and a yellow patch breaking through the clouds. It looks really nice on the wall of her bedroom.
I put the bear picture under under the shelf with all our kachina dolls and the Chinese print in the bedroom.
Mom talked one of her friends into buying one of my books, which I sold for ten bucks, meaning I won a hundred dollars of artwork and broke even . A couple of the other ladies there expressed interest in my book so I gave Mom a couple to sell them tomorrow at church.
All in all a good day.
Posted by P M Prescott at 8:44 PM 2 comments: