I'm posting the poems of Mary Prescott at my Captain's Log blog.
Posted by P M Prescott at 8:35 AM No comments:

Blogger friend and fellow curmudgeon One Fly posted that Michael Martin Murphey donated the easement on 120 acres in Beaulah, Co to the consevancy district.
It's amazing what memories that brought back.
My maternal grandparents owned a small cabin in Beaulah. The road curved around a hill and there was a bridge over a small creek. The pink stucco cabin was on the inside of the curve. It had a large main room with couch, chairs and book shelves on the wall on one side and on the other was a sink, wood burning stove, table and chairs. There was a bedroom past that and the back door. Behind and a ways off was an outhouse. It did have electricity. The book shelves were full of reader's digest, coronet and national geographic magazines, misc. books and lots of reader's digest condensed books. When you went there it was for peace, quiet and reading. Lake Isabel is not far away and lots of times we'd spend the night at the cabin and go fishing at the lake.
Between the cabin and the creek were willow trees. Grandpa had some long butcher knives and gave one to Bruce and one to me. We attacked those poor willows and made bows & arrows. The willow branches were too flexible to make much of a bow and the arrows never sailed very far. On the other side of the road was a hill with a flag on top. We would always have to climb the mountain (when your 7 years old just about anything is a mountain) and reach the flag.
We lived in Pueblo then and it was only a forty five minute drive to get away from the heat of town and relax for a weekend. Grandpa's brother, Frank, lived in a beat up trailer there for a few years and we (Bruce and I) would hike up to his trailer to say hi whenever we were there. Frank was moved out of his trailer and put in a retired journalists home in Colorado Springs. Mom took us to visit him once before he died.
A rancher there would rent out horses for riding and I remember Dad would have Bruce in front of him and I'd be in front of Mom as we went horse back riding. It was a big deal when they let Bruce ride alone. We moved down to Albuquerque before they thought I was big enough for that priveledge.
Perhaps the singular memory of Beaulah was a labor day weekend. We drove up on Friday night in the rain. The plan was to go fishing on Saturday and Sunday at Lake Isabel. Mom woke up and started trying to make a fire in the wood burning stove, but filled the cabin up with smoke. Dad got up and looked out the window to see four inches of snow on the ground and it was still coming down.
We ate breakfast and as there wasn't much else to do while hoping the snow would let up and perhaps we could get some fishing in on Sunday we sat around the wood burning stove. Either Mom or Dad chose a book named Pioneer Go Home by Richard P. Powell. They took turnes reading it aloud. Around noon the wood was giving out and Dad went out to get more coming back with a bucket of coal. By late afternoon they decided the fishing trip was a bust and we went back home.
This event was burned onto all our memories particularly that book. By chance we found it was made into a movie but renamed Follow That Dream starring Elvis Presley.
We moved down here. The Record Music Company in Pueblo fell victim to discount stores and Grandpa sold the building and the cabin. When Mom and Dad went back for class reunions they found that the cabin had been leveled, cleaned up and restricted for habitation not to contaminate the stream. My fondest memories before the age of ten are about Beaulah.
Posted by P M Prescott at 11:24 AM 4 comments:

I came across a book of poems from this lady and found I like them. Thought I'd share some.

Mary Newmarch Prescott, American author and sister of Harriet Prescott Spofford, was born in Calais, Maine, August 2, 1849, the daughter of Joseph Prescott and his wife Sarah Bridges. Her parents removed to Derry and afterwards to Newburyport, Massachusetts. Mary was educated chiefly at home by her mother and sister. Her first story was written as a school composition, but was sent to Harper's Magazine and accepted. After that she wrote many poems and short stories which were published in various magazines. She died at the home of her sister, Mrs. Spofford, at Deer Island, Amesbury, Maine, June 14, 1888.

Though underneath the silent clod

Thy body rests—thy soul with God

Doth mount on wings of prayer and praise

To swell the measure of thy days.

Even though the grass is tall and green,

That grows thy heart and mine between.

Even though thy face be hid from me.

My Father's will I clearly see.

Fathers day makes us stop and reflect on the role our Dad's played in our lives.
There are various fazes as we grow up. I remember Dad when I was little and him running after Bruce and I after he told to run and how surprised we were how quick he caught us. When he stopped being taller than us and we fought over whose socks were whose. Teaching for a few weeks across the hall from each other, that was special time. Staning out in the yard talking while he watered his flowers and shrubs. Seeing the look on his face when he held his grandchildren. Some things can never be forgotten.
Posted by P M Prescott at 8:23 AM 2 comments:

The last two messages from the hospice nurse in Milford have said that Mother-in-law is eating, gained two pounds, sitting up and aware of things and had a hair cut. Didn't think she'd make it to her 92nd birthday.
Posted by P M Prescott at 2:51 PM 2 comments:

Vivian Norris has an interesting article at Huffpo today. Being a teacher and writer I watch documentaries and channels like Nat Geo, History, Bio, stuff that my wife huffs and puffs about. She's much happier with her daytime drama. Norris is afraid filmmakers will stop doing docs because large corporations hit them with law suits. In my mind the more the corps fight them the more interest they generate and more people watch them. My fear is that documentaries will die because no one wants to watch them anymore. Escaping into the oblivion of explosions, car chases, body dismemberments, who cares about "real" reality?

Documentaries can be wonderful ways to lose ourselves in reality, not virtual reality, not reality tv, but "real" reality; they are not only enjoyable to watch, but because they are based on these facts, force us to question when we are fed lies. Good documentary filmmaking preserves our common human accomplishments and documents the natural world and ways of life (which in some cases sadly is disappearing. See a great doc about disappearing cowboys and shepherds in Montana called Sweetwater).

The phrase that Norris uses caught my eye: "real" reality. My things have gotten complicated when we have to distinguish which type of reality we're talking about. 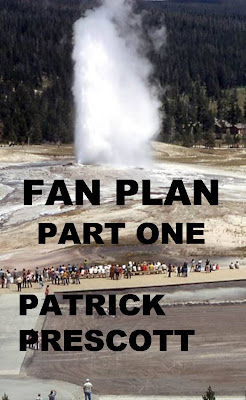 An asteroid hits Wyoming in 1965 and an oil company's computers predict that Yellowstone a super volcano already thousands of years overdue will erupt in 50 to 70 years wiping out all life on the planet.
James Eastman, president of the company decides to come up with a plan for "When it hits the fan."
This is a multigenerational story covering the last fifty years and how technology if used properly could save billions of lives should a catastrophy like this happen.
Part 1 covers 1948 to 1976. Part 2 is in the works.

Now available at Amazon.com, Barnes & Nobles and smaswords.com. For $2.99

At Smashwords if you put in the coupon PA52R it's free for thirty days.


All coupons for the other stories at smashwords have expired.
I've looked at all the different formats at smashwords and have found pdf to be the best.
Posted by P M Prescott at 5:52 PM 2 comments: