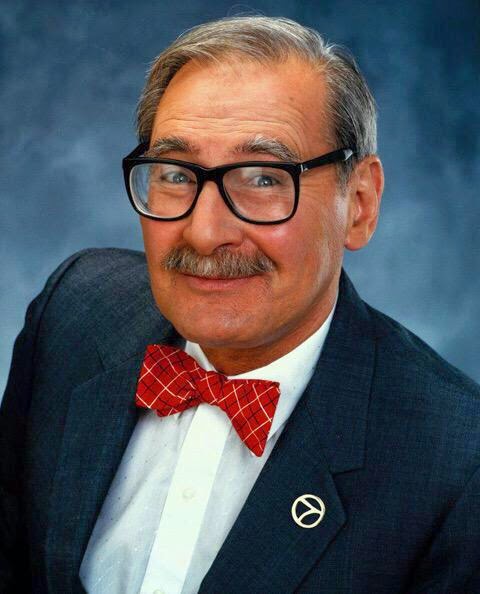 George Fishbeck passed away. I met him once when I was young. Brother and I were outside the V.A. hospital with our cockerpoo puppy while Mom was visiting Dad at the time. He and his wife walked by and asked what kind of dog she was (damn can't remember her name, have to ask Mom). When we told him he shook his head and laughed. Mom knew his wife from a club she belonged to at the time and when they met told her how thrilled we were to meet him.
He taught (at and with) Albuquerque Public Schools for 23 years. This was way way back in the day. Our local station for PBS was started as a joint project with UNM and APS. When I was in elementary school every Thursday the teacher would wheel a TV in the room and we would watch George teach science. It was a wonderful way to reach all the students in the city at once. He was funny, entertaining and I still remember some of the experiments he performed. The one that comes to mind right now was taking swabs of different things around his science lab and the next week showing us the cultures. The most disgusting was the one from his mouth. I was in fifth grade and all of us thought French kissing would be gross. Our own local Mr. Wizard or Bill Nigh the Science Guy. He would always sign off on the show by swishing his mustache and saying, "Adios muchachos and muchachas."
On Tuesdays (it's been over 50 years so I may have the day of week wrong) a lady (can't remember her name) would do music over the TV. She was pretty and would lead us in songs kind of Mich Miller style, but if was from her I learned songs like "O' Susanna," "Down in the Valley," "Shenandoah," and other American ballads.
Once upon a time New Mexico and America did value education by building schools for the Baby Boom generation and finding ways to educate instead of drill and test. Learning is so much more than cram and mental enema.
KNME ended these programs and George went on to be a local weather man. He was the first person I remember who was announced as a meteorologist and true to his roots he made weather fun, entertaining and educational. Sadly as I was graduating high school a TV station in California lured him away for bigger bucks and he remembered more for what he did there on the national level. It is amazing how fondly he is still remembered here by all of us old foggies, but he was a hard man to forget.
Posted by P M Prescott at 9:22 AM 6 comments: