Sister-in-law called again. Mother-in-law regained consiousness, is aware of where she is and has talked to the doctor. Grinnygranny talked with her mother a little bit. She's not out of the woods yet, but her condition is more promising than when we got the first call. Could be a case of dehydration and when they got an IV in it brought her around. We'll be taking a trip up there this weekend to check on her.
Posted by P M Prescott at 7:03 PM 2 comments:

Out of the blue

Grinnygranny's mother is in the hospital with heart failure and not expected to survive the day. Sister-in-law called and told her that she pushed the call button in her apartment and the EMT's arrived, but that her heart is giving out. By the time they got her to the hospital she was unconcious and they don't think she'll last more than twelve to twenty four hours.
We had planned on taking Auntipesty up to see her after graduation, but time ran out on that trip. We were going to try and make it up there this July, but the situation with Dad didn't make that possible. We were planning on going to visit either at Thanksgiving or Christmas, but now it's too late.
This is getting tough.
Posted by P M Prescott at 11:44 AM No comments:

Mom was released from the Hospital Saturday morning. They finally started her treatment Friday evening after I left, maybe what I said to the doctor lit a fire under the nursing staff. She's staying with her friend. Went by to see her Sunday and she was doing much better.
Monday sister was to find out from her doctor what kind of treatment he wanted to do. The choices are not very good. Have surgery to remove the colon, which would only make the other tumors more aggresive, or daily chemotherapy. When I talked to Mom last night she said the doctor still hasn't made up his mind about the treatment, but they are wanting to send her home.
It was actually good to get back into the classroom and start teaching once again. It's like riding a bicycle -- you never forget. I've got a ton of papers and attendance to catch up on, gradebook to setup and that kind of stuff to keep my mind off the other problems for a few minutes at a time.
Mom is wanting to drive home in the next few days and daughter will be going with her. Daughter is both a blessing and a curse at times. I've told Mom is she becomes more curse than blessing to fly her back.
Posted by P M Prescott at 2:31 PM No comments:

I thought things would get somewhat back to normal after Dad's funeral. So much for thinking.

Sister was admitted to the hospital on Saturday before the funeral with a bowel blockage. She was flown home Wednesday. They did a CT scan yesterday, but so far I haven't heard what they're going to do. Bruce has been there and we talked this morning he thinks they'll do surgery, but since then no word. Mom is afraid that her cancer is moving from stage three to stage four.

Mom started having back pains on the drive out. She went to urgent care yesterday morning, they gave her some antibiotics saying she had a lung infection. She kept telling them that her kidneys were hurting, but they wouldn't listen. She called me later (she was staying at a friend's house) unable to get any liquid down or medicine in extreme pain. I called 911 and had her taken to a hospital. Spent most of last night with them doing nothing, they did give her a pain killer that helped a little.. The finally got her to a CT scan around 2am. They said they would admit her at 6am, but didn't get her up to the room until 9:30. They finally gave her some acetomenaphin at 10:30 the first pain medication in ten hours. The doctor finally deigned to see her at noon told her what the treatment would be. Mom told me to go home and get some rest. When Grinnygranny got home we went to dinner and then visited Mom. They had done nothing. The doctor made the mistake of trying to get on the elevator to leave as I was getting off. I backed him up and enlightened him that his orders were not being done. He said he'd talk to the nurse. I told him if he didn't want to treat Mom I'd take her home as they weren't doing anything. Mom decided to stay the night, but I'm bringing her home tomorrow because I don't think they'll be doing anything tonight either.

Monday will my first day in the classroom. I'm not mentally ready for this.
I had planned on writing more about Dad and doing a chronology of the summer, but it's not over yet.

Today we laid Dad to rest. Bruce did a fine job with the service. Penni was unable to attend, she had stomach pains Saturday and was taken to the hospital where they discovered a bowel blockage. They are trying to break up the blockage without surgery and could be in the hospital for four to six more days. I videotaped portions of the service and showed it to her this afternoon.

My Eulogy
The two standout experiences I had with Dad:
In 1969 I was running track in Junior High. Dad was working nights and taking classes at the University. I didn't see too much of him. One night he came home smiling like the Cheshire Cat. He told me that in one of his classes there was a lady whose husband was coaching track at a rival school and he asked her how his team was doing. She answered by saying, "Pretty good except for the damn Prescott kid." Then she caught herself and asked him he was Dad's son.
Dad said, "He sure is." (Her husband thought he could win every track meet that season and take the city championship. A couple of days earlier against that school I finished first in three races and it was his first team loss.)
Dad was not stinting in his praise or showing pride in Bruce, Penni or me, but this time was rather special. He was so happy to be the father of "That damn Prescott kid."
The other special experience was many many years later. Dad had retired and was getting out the house by substitute teaching. It was nice that whenever I needed a sub I could choose Dad and know I had a sub the students would not misbehave on. I would tell them that I had never been able to get away with anything on him all my life -- so don't even think about it. One of the teachers in my department was seriously ill and I needed a long term sub for six weeks. Mom and Dad were just coming back from a drive up to Washington State, Oregon and California. With only one day of rest he agreed to the long term contract and for six weeks we taught across the hall from each other. I could see the pride in him as he saw me "in action" so to speak. The teacher who Dad was subbing for wasn't very happy about it at first, but when he came back he told me that the classes were the best behaved he had ever seen after a long term sub.
Posted by P M Prescott at 8:43 PM 2 comments:

A picture of my parents 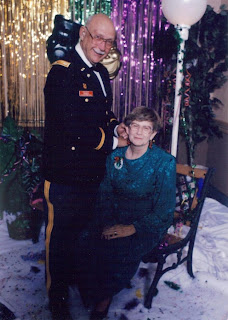 Mom let me play around with her printer which has a scanner on it and I got this picture to work. The others were black n white which didn't scan too well. This is Dad with Mom in his State Defense Force uniform at one of their big to-do's.
Posted by P M Prescott at 10:03 PM 6 comments:

Bruce has a number of posts concerning Dad and has pictures -- my pictures of Dad on my external hard drive in Albuquerque -- he's also written about the genealogy that he and Mom worked on while here.
Mom has posted some thoughts as well.

For me it's still too soon to start on the chronology as it's not over yet. The funeral is Monday then I'll start posting.

Got out on the golf course today, trying to recover now, this heat and humidity is a killer.
Posted by P M Prescott at 11:47 AM 1 comment:

Dad passed away this morning. There's a lot of loose ends to tie up for the next few days and then we'll be driving home.
Posted by P M Prescott at 10:10 AM 5 comments:

Left here Tuesday to take care of my extended leave. Dad seemed normal when I left. He took a big turn for the worse just a few hours later. He could have had a stroke.
I am set for the next two weeks with a substitute and regular sick leave, the paper work I took with me for extended leave they won't need until this two weeks is over. My sub was there so I showed him the room and went over lessons, he'll be there Monday for the in-service to get ready. I got my room set up, but didn't have time to get my computers out of storage and set up. I went to the first in-service day on Wednesday. Maybe the stress of this summer is getting to me, but all the changes they are setting up for this year has me thinking about retiring. With a financial meltdown going on and my retirement dependent on the stock market that may not be the best financial decision to make right now.
It doesn't look like Dad will survive the weekend, after talking to Mom Tuesday night and her telling me how much his condition worsened after I left I was afraid he wouldn't be here when I got back. Her account of these days is on her blog. Penni was here to help Wednesday and after I got in yesterday Bruce came in, though he may not be able to stay too long.
Mom and Bruce have been digging up Prescott genealogy and seem to have made the big break past 1910 that has stymied Mom for years.
I'll post a chronology of the time here after it's all over instead of dwelling on it now.
Posted by P M Prescott at 10:17 AM No comments: