Spent almost all day yesterday at a screenwriting seminar. Chris Vogel who was teaching the class has been working on movies since 1980. He's written a book, which is what he had condensed for the seminar, in order to get everyone to then run out and buy it. He's helped out on the scripts for Lion King, Aladin, Hercules and other Disney movies. He talked about what it takes to get a script accepted, someone asked if he has sold a script, he has -- to a film in Germany, but it has not had international release. Hark! Verily! does that say how hard it is to sell a script!
The class was more about the different stages of a story and how the same stages of a story apply to the process of writing one. I really did learn a bunch of material and feel like I got my $75 worth.
Santa Fe Screenwriters is also having a screenwriting conference May 27 - June 1. There will be top agents and producers to pitch stories and try to sell scripts. All for the low low price of $695 for the conference, $200 to gain access to agents and producers, or $795 for both. If you sign up before Nov. 30 they knock off $150, and because I attended this seminar they'll reduce it another $100. Well golly gee I'd get all that for just $545 plus the cost of motel room and meals, gas and other incidental expenses. Kind of glad I write novels instead of movie scripts. Think of all the money I'm saving by not goint to this event.
Let's see I skipped Glorieta's Christian Writer's Conference earlier this month that's another $400 to $500 dollars I saved. Grinnygranny shouldn't fuss too much because I bought another 20 books since the Publisher had a 50% off special. Somehow she doesn't see things the way I do. For some strange reason she thinks I should be making money off these books and somehow all the expenses compared to what I've collected doesn't compute. When I go the the Southwest Writer's Workshop almost all the other authors are in the same boat I'm in. I keep telling her that not every person who picks up a basketball makes the amount of money they pay Shaquille O'Neal.
Anyway I have a fresh new supply of books to sell -- going cheap for a collector's item (book signed by the author)only 20 bucks. Just e-mail me and I'll get you a copy.
Posted by P M Prescott at 1:23 PM 3 comments: 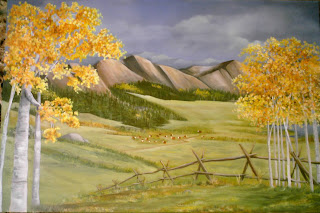 Here's a picture of the painting my "Twin" sent. It looks wonderful over the fireplace. I'm calling it Aspens in Colorado. It also makes for wonderful wallpaper on the 'puter.
Posted by P M Prescott at 10:36 AM 4 comments:

Trying to figure out how to download avideo onto the blog site. Think I've got it. Here's a balloon that flew over the house. We have them coming by all year long to land behind the house.

Thanks for all who have offered prayers and support, Penni is home after 10 days in the hospital. She's still going through radiation and chemo, but has started eating and her bowels are starting to function again. So far good news. She still needs prayer as well as Mom and daughter who are acting as taxi service. Mom has a more complete update at her blog.
Posted by P M Prescott at 5:12 PM 2 comments:

Is anyone out there?

I don't seem to get too many comments when I get on my soap box for some reason. BUT I'M GETTING ON IT ANYWAY!

Paul Krugman in today's Opinon page of the New York Times gives both barrels to the Great Sound Machine sliming a 12 year old boy suffering from head trauma for daring to speak truth to power.

All in all, the Graeme Frost case is a perfect illustration of the modern right-wing political machine at work, and in particular its routine reliance on character assassination in place of honest debate. If service members oppose a Republican war, they’re “phony soldiers”; if Michael J. Fox opposes Bush policy on stem cells, he’s faking his Parkinson’s symptoms; if an injured 12-year-old child makes the case for a government health insurance program, he’s a fraud.
Meanwhile, leading conservative politicians, far from trying to distance themselves from these smears, rush to embrace them. And some people in the news media are still willing to be used as patsies.
Politics aside, the Graeme Frost case demonstrates the true depth of the health care crisis: every other advanced country has universal health insurance, but in America, insurance is now out of reach for many hard-working families, even if they have incomes some might call middle-class.
And there’s one more point that should not be forgotten: ultimately, this isn’t about the Frost parents. It’s about Graeme Frost and his sister.
I don’t know about you, but I think American children who need medical care should get it, period. Even if you think adults have made bad choices — a baseless smear in the case of the Frosts, but put that on one side — only a truly vicious political movement would respond by punishing their injured children.
Posted by P M Prescott at 9:21 AM 2 comments:

Sometimes a political cartoon says it all!

At the Huffington post John Cusack has two interviews with Naomi Klein, author of Shock Doctrine: The Rise of Disaster Capitalism who has figured out the method to the madness of Bushco. Click here for part 1, and here for part 2.

Klein: You hear people complain about how Hezbollah is a "state-within-a-state" in Lebanon -- what about Blackwater in the USA? And that's just one company of hundreds, and a relatively small player compared to Lockheed and GE and Booz Allen. But once again, we can't keep being surprised by this shadow world -- it is an inevitable consequence of Rumsfeld's vision of an outsourced and contracted-out state. A right-wing journal in the U.S. called Blackwater "al Qaeda for the good guys" and it's a striking analogy. Wherever the disaster capitalism complex has landed, it has produced a proliferation of armed groupings outside the state. No surprise, really -- when countries are rebuilt by people who don't believe in government, the states they build are invariably weak, creating a market for alternative security forces, whether Hezbollah, Blackwater, the Mahdi Army or the gang down the street in New Orleans.

Now that is scary!
Posted by P M Prescott at 2:03 PM No comments:

In need of prayer

My sister is in the hospital truly fighting for her life. She's had radiation and is set for another round of chemo Monday. Mom and M are spending nights with her so she isn't left alone. I could hear in Mom's voice, when she called, the terrible toll it's taking on her. It's hard hearing every few days what's happening there and not being able to be present. Thank the Lord for a daughter willing to put her life on hold in order to help out.
Posted by P M Prescott at 11:13 AM 3 comments:

I want to gag, to spew out of my mouth the foul stench of a recurring advertizement by a member of my state's national representative. Little Miss Nasty. In little more than a year she is up for re-election again, and the putrid aroma of her pressuring a Federal Prosecutor to rush indictments still lingers over the country and the state and my city, which she so horridly misrepresents.
This abomination of false advertizing has to do with the S-Chip vote that was recently cast. She is proclaiming to all that this vote will help insure millions of needy children and it's all her doing it even asks the viewers to call in and thank her. (Ulp, gasp, gag, urp)
Well pin a medal on her! (heavy of the sarcasm).
She fails to mention that the northern Democratic representative also voted for the bill, and that the southern Republican representative voted against it. Also absent is the almost certain VETO by Der Decider leaving the children of this country with less health care not more!
Oops, excuse me I just had to retch.
So what is making me so sick? The dawning realization that the morons in this city will swallow the putrid garbage she's dishing out and probably re-elect her.
It's enough to induce permanent bulimia.
Posted by P M Prescott at 2:10 PM 1 comment: