I tried to watch Sleepy Hollow. It started out okay for network TV series which has a censorship handicap over cable and premium channels. Then they got into the 4 horsemen of the Apocalypse crap. To set the record straight: Death rides a pale horse, the color of ashes. Not white like in the show.

The First Seal—Rider on White Horse

I looked, and behold, a white horse, and he who sat on it had a bow; and a crown was given to him, and he went out conquering and to conquer.

4 And another, a red horse, went out; and to him who sat on it, it was granted to take peace from the earth, and that men would slay one another; and a great sword was given to him.

5 I looked, and behold, a black horse; and he who sat on it had a pair of scales in his hand.

I looked, and behold, an ashen horse; and he who sat on it had the name Death; and Hades was following with him.

Okay, if you have ever seen any of the old sand and sandals movies about ancient Rome, they used to have something called a triumph, modern day parades descend from them. Envision these seven seals as a military triumph.
The conquering general would led the triumph riding a white horse and the defeated Kings or generals would follow behind him as captives. Jesus is riding the white horse, War, Famine and Death are defeated and follow him as captives. After the captives would come the victorious army, which would be the martyrs. The sixth seal or all the natural calamities like earthquakes, volcanos, floods, etc are also shown as under the control of Jesus.

Now can you see why I can't stomach Hollywood bastardizing the Bible.
Posted by P M Prescott at 3:05 PM 2 comments: 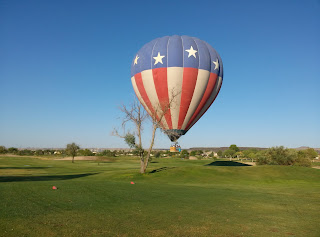 Went to the local golf course. Haven't been there since May when it was awful. Winter kill left nothing but dirt. They've closed off the front 9 and reseeded and it won't be open till Spring when they close off the back nine and do the same. Today the executive 9 was in the best shape since I started playing there in 2000. And Rainbow Riders landed. They love flying over my house about once or twice a month, but today they only made it as far as the golf course about three miles north. 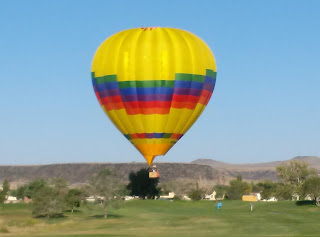 I put out a post on my Writers 2 Writers fb page for a local printer that could do what Lightning Source is doing. Gerdean O'Dell and Jill Lane recommended Print Express and LithExcel and I appreciate their recommendations. I can now print my books at 50.00 for an ISBN and a 6X9 book of 200 pages will run $4.00 per book. I can pick them up so there's no shipping. If I buy ten books it comes to less than a hundred dollars. I sell the ten books at ten bucks each which breaks me even, but I can buy more and I'll be making 60% profit from that point on.. I'm not looking to make a killing off printed books, just want to have some and go back to doing book signings. I can still price the e-books at .99 or up to 2.99. This way if those at a book signing don't have the money they can always buy them at home.
At this price over time I can re-print Optimus: Praetorian Guard, print Human Sacrifices and Vander's Magic Carpet.
Not sure about the children's book Friends Forever I publish for Anne Littlewolf, but we're working on some senior picture books that this should work for.
A whole new world jut opened up for me, ain't it great?
Posted by P M Prescott at 8:21 AM 2 comments:

This video was shown at my church this past Sunday. I agree with most of it. I was forced to define my position on same sex marriage. This is what I've concluded.

I am a licensed Southern Baptist Minister. I am also a citizen of the United States and understand the Constitution and the Bill of Rights. It is possible to hold certain religious beliefs without making them the law of the land. There is no cognitive dissonance here. Jesus said it best: "Render unto Caesar what is Caesar's and unto God what is God's."
I feel it is time to voice my opinion on the issue of same sex marriage.
I have lived next door to, worked under and with, as well as taught students who live this life style. They are human beings and deserve all rights guaranteed under the constitution. As a Christian I am to treat them as any other of God's children and as an American respect their rights as they respect mine.

Two big issued on this have come up in New Mexico the last couple of weeks. The state constitution does not specify gender concerning marriage. Gary King the attorney general for the state was asked to render a decision on the matter, and he punted saying it should be left to the legislature. He is going to run for Governor next year. A county clerk in Los Cruces decided to start issuing same sex marriage licenses. Surprisingly the Tea Party Governor did not call an emergency session on the issue and punted as well. She is up for re-election.
A number of couples sued to get a court order issued forcing their county clerks to issue same sex licenses. As of yesterday eight counties are now issuing them. Those against this are crying foul, because they are suing only in the counties where the county clerk is in favor and does not argue against them at the hearing, so only one side is represented. In an adversarial legal system this is a valid point.
The argument for allowing same sex marriage is that since the constitution doesn't specify or prohibit these marriages they should be allowed. All laws by their nature forbid and what is not forbidden is permitted.
The argument against has two points. 1. When the state constitution was written in 1912, it wasn't an issue that needed to be addressed. The state had sodomy laws making homosexuality illegal. These laws were repealed in the 1960's. Therefore the "spirit" of the law should be observed not the "letter" of the law. (A little irony here, those against are the "strict constructionists" on Roe V Wade, but flip flop when their ox is gored). 2. Precedent: A few years ago a county clerk issued same sex marriage licenses and the state Supreme Court ordered her to stop. This decision should be upheld until such time as the state Supreme Court reviews and overturns its previous ruling. Gary King as AG has ordered that the marriage licenses from this time are valid and to be honored. A previous AG said they weren't.
The Sticky Wicket
The state Supreme Court did issue a ruling recently angering many against same sex marriages. A couple approached a photographer about taking pictures at their wedding. The professional photographer refused citing his religious beliefs on the issue. The couple found another photographer who was cheaper. You'd think that would be the end of it, but they sued the first photographer for discrimination. The state Supreme Court ruled against the photographer and he was forced to pay damages. This could be construed as the state Supreme Court tacitly approving the licenses.
Those who have been oppressing same sex couples can now claim victimhood. This poor picked on religious fanatic has been harmed. Pardon my sarcasm, but if the guy didn't want to do the job he could have said no and left it at that, he didn't have to give a reason or a sermon. Ever since the sit in at a Woolworth's lunch counter public businesses have been required to serve all customers. There are consequences of discrimination under Civil Rights law. Sorry Mr. Photographer you should have kept your mouth shut or done what you are in business to do, take pictures at weddings. A photography studio is not a church.
Should a pastor who is opposed to same sex marriages be compelled to officiate one? No. The pastor and Church is covered by the first amendment. Public businesses are not.
In Conclusion:
What is happening right now in New Mexico is known as a fait acompli. By the time the legislature meets nothing they do will change what's happened. Its a done deal. Like the fight over legalized abortion that doesn't mean it will go away. The rabid fundamentalists will have another dead horse to beat, but what else is new? They fired all missionaries that were divorced and remarried when they took over the SBC in the 1980's for the sin of living in adultery, and I have been treated as a second class Christian due to their misinterpretation of God's mercy and grace. That doesn't mean all Christians are that deluded or insensitive to other's spiritual needs.
I  have no problem with same sex marriage. Religiously its an issue of all God's children being sinners and to love them as He loves me. Politically it's an issue of equal human rights. I, or any other Baptist, do not have the right to legislate the morality of another person based on the what the Bible says. The first amendment protects me from other religions forcing me to believe their way and protects others from me forcing them to believe my way. That's freedom of religion and the free exercise of it.
Posted by P M Prescott at 11:24 AM 3 comments: 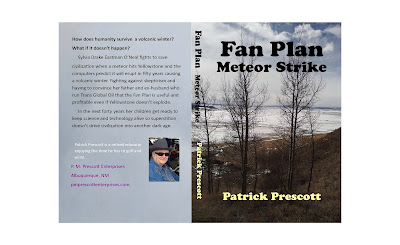 Finally getting a handle on the pricing of books I've reached a conclusion. Keeping the cost of the book at retail to $10.00 I've edited out thirty thousand words and reduced the font to 9 and 10. Not satisfactory.
The book has to be readable and font that size is just too small. Cutting so much back story and other places made the story a little too Spartan.
So I'm turning the story into three books.
Book one I've named Fan Plan: Meteor Strike bringing back the Drake and Eastman family history. The story starts with the meteor strike in 1965 and the formulation of the Fan Plan then back tracks to the 1920's with the creation of Trans Global Oil and Fort Worth Steel. It will end in 1969 as Patrick Eastman and his O'Neal half-brothers go through Faith Boot camp.
Book 2 will cover the 1970's through 2000 as the third generation of Eastman's and O'Neal's head off to college, get married and start working for the company and foundation.
Book three will end in 2012 adding the fourth generation of children.
By breaking up the story I'm able to devote more time to fully explore the wide variety of characters in the family and all the measures they take to prepare for a world wide disaster.
Posted by P M Prescott at 5:12 PM No comments: