The Albuquerque International Balloon Fiesta will start a week from this Saturday. Ballooning is big business in our little city. Naturally living here for over 40 years with them filling the sky year round, many of them flying over my house and landing in the lot behind me, we had to go up. Balloon rides started at $200.00 a person in the 1990's, not sure how much they are now. With a family of four that's a chunk of change.
Fortunately at the school where I was teaching a fellow teacher was a balloonist and he invited the family to a ride.
The first time we went up with Blair it was a clear day, no clouds and the wind was from the Southeast at around 3-5mph perfect for ballooning. The principal of our school was also invited. She was a harsh taskmaster, but when it came time to enter the gondola she grabbed my arm with a look of sheer fear and said, "Pat, what am I doing?"
The flight was flawless. We went up about two thousand feet in a matter of seconds and then he brought us down over the mesa spotting some large sagebrush. Blair calls them his brakes. We landed and waited for the chase crew and the others going up for a ride. Wife and kids went up next. In all the flight lasted less than five minutes, but it was thrilling. What I intuited without Blair saying anything was the first thing pilots do as they go up is look for a place to land.  Principal was grateful to be on solid ground again. From that time on until she retired we were good friends.
After Blair lifted off, landed, took on another load of passengers; it only held four at a time, and all went up once, we folded up the envelope, did the "Bun's on" by sitting on the envelope as it was packed into the gondola. We did the balloonist's ceremony of getting champagne poured on our heads and drinking a toast. All in all a very pleasant morning and something to savor. My daughter was around six or seven at the time and she still remembers the experience.
The second time was the next week. Blair was putting in hours for experience before the balloon fiesta. It was another perfect day only the wind was from the Northwest and blew us to the river. Principal sat out this day. I was in the first flight again and as we drifted across the bluff at the river's edge he tried to do a "Splash and Dash" where you descend to the river, splash down and lift off. With large cottonwoods on both banks of the river it's not as easy to accomplish as it looks on TV with helicopters videotaping the balloons doing during the fiesta. We tried to splash down, but about twenty feet above the ground the wind shifted from Northwest to East. He lifted up and tried three times and gave up. We drifted over the river and into the North Valley part of the city. Not a lot of places to land on a good day, but with tricky winds at ground level even more difficult. He spotted a lumber yard and headed towards it. Again just as we got close to the ground the wind shifted and it took up out of the yard towards the twenty foot chain link fence with concertina wire on top. I expected he would go back up, but he kept going down and I grabbed on to the two others as they grabbed on to me while we saw the razor sharp wire coming closer and closer. I envisioned it slicing through the basket like hot butter and didn't want to think what it would do to flesh. We bounced off and landed safely on a street.
Blair tethered the balloon taking the others up and down. A few neighborhood kids came to watch and he took them up too until all out of propane.
We went to the fiesta that year to crew for Blair, but he had twice as many volunteers as needed. We've never gone up again and at least I've never felt the urge for another flight.
Posted by P M Prescott at 9:46 AM 4 comments:

There's a blogger I read regularly named Samantha. She's liberating herself from purity culture, the most virulent of Christian fundamentalism. Most of the time I sympathize with her, understand where she's coming from having briefly flirted with fundamentalism as a teenager, fought it at a Baptist college and seminary and lived through the takeover of the Southern Baptist Convention by thieves in sheep's clothing.
One thing we have in common is that we can't find a regular church where a free exchange of ideas is permitted and have resorted to attending a small house church.
I rejoice that she and many of her commenters are fleeing the patriarchy and rape culture it breeds and mind control of religious tyrants. She's had a hard life and even harder effort to build her future while maintaining her belief.
HOWEVER
This post left me shaking my head. Please read.

I don't want to reply to it in this post, but welcome comments for a discussion there.
Posted by P M Prescott at 9:17 AM 2 comments: 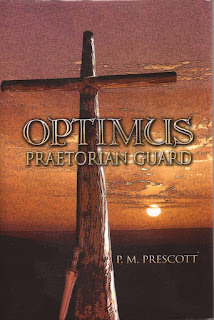 From August 26 through the 30th I did a promo on Optimus. It was free as an e-book on Amazon. On fb I said I would mail a free printed copy for the first three reviews on Amazon.
74 copies were downloaded and I'm waiting for the reviews.
It's nice to know my work is out there and being read.
The deal still stands on the first three reviews and the e-book is only .99 regular price.
Posted by P M Prescott at 8:41 AM 2 comments: