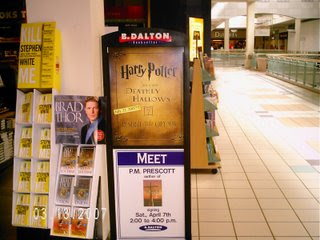 First major book signing March 2007 at B. Dalton's in cottonwood Mall.
Halloween has become extremely easy for me this year. The English department came up with the idea that teachers should dress like their favorite author. When they ask me why I'm  not in costume I reply that I am. My favorite author is me. Duh!
Posted by P M Prescott at 11:40 AM 2 comments: 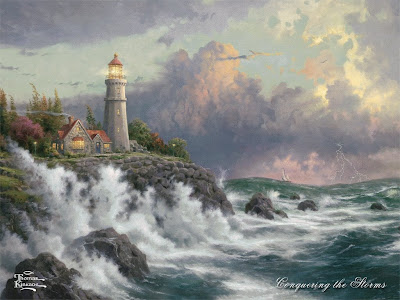 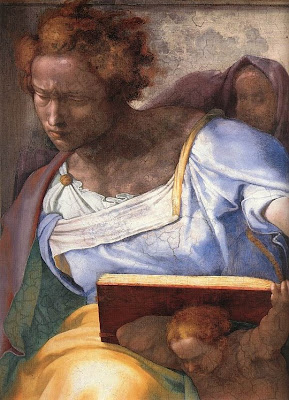 Belief in the system

After I wrote my last post, which I freely admit is biased by the fact I teach history at the high school level, I read an article in the latest Harper's Magazine by Roger D. Hodge entitled Creative Destruction.
The article is coming out this week, but that means it was probably written end of August or early September right after the conventions and the polls were showing a dead heat between the two major candidates.
Mr. Hodge was terribly upset that the race was this close and blamed it on the Democratic ideology that elections are about the People's will. In essence the major points of my last post. Mr. Hodge's assertion is this:

America’s
narrative concerns “democracy.”
According to the classic theory that
appears in our civics textbooks,
modern democracy is a political system
in which the people decide how
they wish to be governed by electing
representatives who carry out their
will. The ultimate source of authority
in the democratic system is thus
the individual voter, whose solemn
and heroic responsibility we celebrate
at every national, state, and
local election. The basic premise of
the classic view is that the people
rule, and so we are told ad nauseam
from the time we enter kindergarten—
and that, we tell one another
at every opportunity, is what
makes America the greatest nation
in the history of the world...

The direct
strategic corollary to this mystical
belief in rule by the people, and the
central flaw in the Mondale,
Dukakis, Gore, Kerry, and Obama
campaigns, is the idea that a party
can win a national election by appealing
primarily to Americans’ reason
and better instincts—to faith,
hope, and love—by presenting sensible
programs, together with respectful
criticisms of the opponent’s
record, detailed critiques of his policy
proposals, and polite refusals to
engage in the politics of personal destruction.

His attitude is that this is a school boys' dream and that the Democrats need to grow up and fact the real world of dirty politics or McCain and the Republicans will win agan.

I too was worried in those dark days of Sarah Palin's basking in media glory. Since the debates and a steady pulling away by Obama in the polls since then I am less concerned, but as Russ says at his blog the only poll that counts is in on election day. (Grinnygranny and I voted today -- so glad that is out of the way)

I am not the total idealist that Mr. Hodge would think all Democrats are. I believe in the system and trust its premise, and this election is supporting my belief. It was hard to swallow that "The People" drank the Kool-aid in 2004, but in 2006 there was a healthy dose of buyer's remorse. Candidates are now packaged and sold to the public like any other commodity. I've heard the story (unsubstanciated, but it sounds good) that Ronald Reagan in 1984 walked into the advertiser's meeting planning his re-election campaign and said, "I heard you were selling a can of peas, though you'd like to see the can."

The only blessing after eight years of Bushco is that he has left such a huge stench on the Republican brand that even the bumbling and inept Democrats should walk a way with a congressional landslide and regain the executive.

The article was written before the economic meltdown, so Mr. Hodge can be forgiven for his doom and gloom. After all there is a sure fire way that Democrats win elections: IT'S THE ECOMONY STUPID!

Scott Horton on his No Comment blog, David Iglesias when here speaking to the students, Bruce at Mainstream Baptist, and more bloggers than I can count are all decrying the need after bushco's raping of the Constitution to restore the Rule of Law. Which has had me pondering over the weekend (since I teach a high school class in law) What is the Rule of Law?
I don't think what we need is the Rule of Law.
We need a return to Common Law and move away from Civil Code.
Here is where I go back to being a basic high school history teacher. I cover the Constitution and no I don't make the students memorize the Pre-amble, like I had to when the same age, but it still says: WE THE PEOPLE...
Not God and the Ten Commandments, not Rome's twelve tables,  not even Alfred the Great's Dooms (which actually is closer to our legal system than the Bible). This country is founded on the RULE OF THE PEOPLE not the Rule of Law. We vote for and against those who make our laws and execute those laws, and if we don't like the laws they pass or the way they are executed we vote them out of office and replace them with people who respond to the WILL OF THE PEOPLE.
Divine Right of Kings (or Presidents according to Roberto Gonzales) is what is at the heart of Bushco's raping of our Constitution. Under this kind of legal system (Civil Code) the leader (King, Emperor, whatever) is the law and everyone must obey their laws or suffer the consequences. That is a true Rule of Law. The law is king, because the King makes it. This is what we rejected in the Declaration of Independence referencing Natural Law.
In short we don't need a return to the Rule of Law, we need a return to the Rule of the People and the Spirit of the Law: our checks and balances so our next executive leader can no longer make it up as he goes along like Der Decider has for eight years.
Civil Code (Letter of the Law) Legal system updated by Napoleon and used in all the countries he conquered or the colonies of those countries.  System was devised by Monarchs, Emperors, and dictators; earliest form Rome's Twelve Tables circa 600BC.
Common Law (Spirit of the Law) The law held in common by Germanic Tribes of Northern Europe. Since England (Germanic country) was not conquered by Napoleon the legal system used in all the British Empire. Everyone is subject to the law, even the ruler. Greatest examples being the Magna Charta, English Bill of Rights, American Declaration of Independence and the American Bill of Rights. Allows for Jury Nullification and Judicial Review.
The Spirit gives life, the Law gives death.  ---Jesus of Nazareth
Posted by P M Prescott at 1:44 PM 2 comments:

The Wellness of the Soul

Penni had a very touching post on her caringbridge site today. It gave me a sense of warmth and tears at the same time.
Those who come by here please click on the link, read her post and leave a message on her guestbook, and if inclined offer prayer, it will be greatly appreciated.
Posted by P M Prescott at 7:33 PM 2 comments:

I was notified yesterday that David Iglesias would be speaking to the students today. It was a shame that my Law class wasn't meeting today. I took my World History class to hear him and saw a number of my Law students in attendance, so on Monday we'll have something to discuss.
I was right by the door when he (Iglesias) walked in, shook hands with him, and he went on down to the stage. His wife and daughter were there as well. She was very gracious asking all of us what we taught. I gave her my card for Optimus.
He had a nice little talk about the importance of getting an education, working hard, and doing what is right, no matter how much that might hurt your career. It was a good message for the students to hear. Their behavior was very good considering every seat was taken in the auditorium and I knew some of them to be rather disruptive. He left plenty of time for questions and it was gratifying that the students had more questions than time allowed. It's a shame all of my classes didn't get to hear him.
Posted by P M Prescott at 12:51 PM 2 comments: