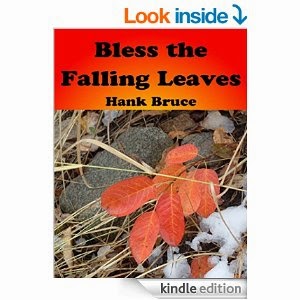 It is nearly impossible to read with tears in your eyes. After the first chapter I kept a box of tissues and a waste basket handy.
This is an intensely painful book to read because Hank Bruce with his carefully crafted words makes you feel the pain of Darfurian refugees and a homeless Vietnam veteran in the US. Anyone who reads this short story will be profoundly changed as it has done so with me.
I will never treat Christmas and the meaning of our celebration the same again. Here is the true meaning of this sacred holiday. Hank I agree, we are all orphans.
Posted by P M Prescott at 11:11 AM 2 comments:

Five years ago today was my one and only day of retirement. A lawyer friend called me and asked if I would help him out on a case. He's been my client ever since. (I'm self-employed and bill him for services). Since that time between running to the courthouse, scanning, organizing files, etc. I get to write in an office far away from the temptations of television and grand kids.
In these five years I've edited, revised and done a second printing of my first novel: Optimus: Praetorian Guard.
I also discovered the joys of e-publishing on Amazon. All my books are available at amazon.com/patrick prescott/b004vc67i most of them only 0.99

Human Sacrifices was my second book. I originally wrote it as a short story while working on Optimus. I was told by my mother who was reading my rough drafts that my female characters were too weak. I wrote this story about a female teacher dealing with an abusive husband while starting out as a teacher who finds a loving husband, starts a family and desperately wants to help her student avoid gangs by caring and teaching them to read and understand the value of an education.

This was a novel I wrote over a summer in 1992 for the Ted Turner Tomorrow Awards. A friend in my Sunday School class at church was a Physics professor at UNM and asked me to proof read a lecture he was going to deliver at a convention. He suggested in his paper that with superconductive materials it was conceivable to make a modern equivalent of a magic carpet that could make anything upon it fly. So I wrote a story about trying market the first flying car.
After twenty years gathering dust I adapted it to a post 911 world where a flying car would have a lot more trouble getting government approval.

My first books written from scratch after retirement. It went through many incarnations, but is finally complete as a trilogy. A meteor hits Yellowstone in 1965 and the computer in the geology dept. of Tans Global Oil predicts the super volcano will explode in 50 to 75 years and billions of people will die. "When it hits the fan, you need a plan." TGO develops a plan to not only help the family survive this catastrophe, but what good is living through this to go back to the stone age, so the plan carried out through four generations is intended to keep civilization from being destroyed.

Fletcher Family Battles are short stories centered around the Fletcher family in the middle ages explaining the culture and warfare of the time period. There are more to come.
Posted by P M Prescott at 11:41 AM 4 comments: