All the news outlets today are grading Obama's hundred days. They're grading him on the economy, foreign policy, style of dress, blah blah blah.
Grading him against what? or whom? All assessments must have a standard. That's the problem with all the people giving him grades, they all use a different rubric.
Was he able to turn the economy around? He's done more in 100 days than W did in eight years, but then one step forward is better than a million steps backwards.
Did he get as much legislation passed as FDR? No, but FDR had more months to write the legislation and get his ducks in a row, he wasn't inaugurated until March back then, not January. His first hundred days ended in June, and there's always a flurry of legislation passed just before summer recess.
Still it does make me think of school and if I follow that grading analogy a hundred days would be the equivalent of the very first grade of the very first week of school. He has four years, the final report card won't come out for quite some time. Granted no one wants to start the school year off with a failing grade, but it doesn't mean you'll fail the course. Getting an A on the first grade is also no guarantee that you'll pass the class.
I liked Madeline Albright's comment where she compares this to the first hundred yards of a mile. (I was a miler in high school and college, she's talking my language) The first hundred yards of a mile only gets you into the rhythm of the race, it doesn't determine the outcome.
Posted by P M Prescott at 5:08 PM 2 comments:

We're having a baby boom at my school, and it's not just the students (wish I was kidding). In my department two fellow teachers became fathers on April 21, and yesterday. There are two other teachers expecting soon. Life renewing itself. A wonderful thing.
Posted by P M Prescott at 9:47 AM 2 comments: 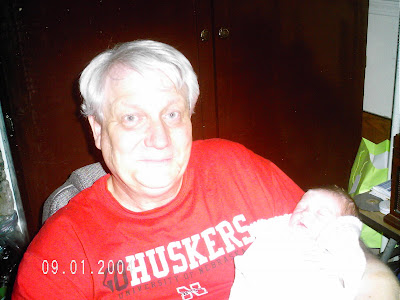 Congratulations Are In Order

Bruce, my older brother, is now a grandfather. I beat him by six years. James William Clark born to my niece. Mom is getting a full dose of great-grandkids this year as Bruce's son's wife is expecting toward the end of summer.
Posted by P M Prescott at 2:10 PM 2 comments:

The Joys of being a Grandfather

New baby's are wonderful, but they're even more wonderful as grandchildren. Abigail is precious, but with E, C, auntypesty, grinnygranny,  and Mom being there to feed, rock, change diapers it's so much less work for me than when my two came along.
And have things changed since they were born! C had a nice hospital room which had a real wide ledge up against the window, there was a twin mattress on it and E spent the night in the room. A whole lot better than a recliner or chair to sleep in. So far the only one having a hard time is Daniel, who can't understand why he has to be quiet so much. Three year olds are not naturally quiet.
Another perk of being a grandpa is that you can get out of the house and play golf.
I walked the full 18 holes yesterday, normally I walk nine or ride 18. It was tiring. This was the first time I played Kirkland AFB's course. It was nice. You just have to know someone with base privileges to get in. The two guys I've been playing with most of the winter invited me to join them, which was nice. The grass around the greens is coming out. During the winter you can usually putt onto the green, my chipping game is really rusty, but it's still a lot of fun.
The header is the latest painting by Anne Littlewolf. I just love her work.
Posted by P M Prescott at 1:51 PM 2 comments: 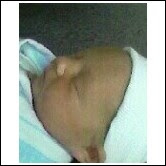 Grinnygranny and I have a new granddaughter, named Abigail. She arrived at 10:26 this morning. Mother and child are doing well.  7lbs 2oz.
Posted by P M Prescott at 11:47 AM 4 comments:

E's girlfriend went in last night and the doctor was going to induce labor. We haven't heard anything yet. Will post when our new granddaughter arrives.
Posted by P M Prescott at 10:11 AM No comments:

I hope everyone had a nice Easter, or memorable Passover.
We had a simple meal. Mom came over and we had a pleasant time talking about many different things. Living alone Mom likes to have someone to talk with.
We watched the Masters and it was very entertaining, though we were rooting for either Tiger or Michelson to pull off an upset. Kenny Perry had it in his grasp and let it get away.
Posted by P M Prescott at 9:09 PM 2 comments:

Stop by at Michael Manning's blog to wish him a happy birthday. He has one of the most touching posts I've read in many many visits to blogland.
He's a Steve McQueen aficianado and every year has a Film Festival that honors him. His insights into McQueen's life and movies is always eye opening. After having read his posts I've seen Junior Bonner, Bullit, and Le Mans, flicks that I missed growing up. Grinnygranny and I have really enjoyed them.
Posted by P M Prescott at 5:52 PM 2 comments:

The Value of the Mustang

Auto bailouts and breakups are filling the news lately. Obama's Car Czar forced the dimwit at GM out. Chrysler could disappear as far as I'm concerned -- see previous post at Captain's Log. It was bought from Mercedes by a private consortium that included Dan Quayle. Now there's a recipe for disaster. Maybe Fiat can salvage it.
Notice of the Big 3 only Ford has not asked for a bailout. Why? I'll tell you why. The Mustang.
GM and Chrysler have a competing sports car to go against the Mustang, but they've both been stupid on the price.
The Mustang is a sports car if you put in a V8 engine and fancy it up. The GT and Cobra are really hot. They sell for 30 grand and up. But it's also an economy car. With the V6 and basic package it gets good mileage and sells from 18 thousand to 24 thousand. That's why everywhere you look Mustangs are all over the road.
GM in a fit of pure insanity killed the Camero, and when it decided to bring it back took four years after the design was released to bring it to market. It was in the Transformers movie and two years later you still couldn't buy one. That's just plain stupid. Now that it's finally hitting the market they sell for Fifty grand. Why not just buy a Corvette? Do they really need two top of the line sports cars?
Chrysler brought back the Charger, but made it a four door killing whatever sporty or economy value it could have had and upping the price. When they finally brought back the Challenger they priced it from 45 to 60 grand.
Both of these cars, and I'd love to have either one, start at what the Mustang sells for at its top end. If the Mustang started at this price you wouldn't see many of them either.
That was the genius of Lee Iocoa who came up with the car in 1964. A people's sports car. The Camaro and Challenger were developed to compete with the Mustang, which they did from the mid sixties until the mid eighties. Pontiac's version, the Trans Am was about the biggest selling car of the seventies thanks to the Smokey and The Bandit movies.
If either of these car companies had a lick of sense the Challenger and Camero would be priced around 20 thousand with a V6 or Turbo 4 cylinder engines and they would sell like hot cakes, just like the Mustang. In fact many people might trade in their Mustangs to get the next best sporty economy car. But Corporate thinking is too dense to figure this out.
Where's the next Lee Iococa?
Posted by P M Prescott at 10:24 AM 3 comments: