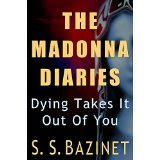 S. S. Bazinet is a fellow writer here in town and graciously let me read her book. The problem with a book like this is were I to add more than what I say below it would spoil the story.
This story is in the horror genre which lends background, but it's mostly about the family relationship between twin brothers. One brother is bitten and will turn into a monster, nebulous whether vampire or zombie, not really important. The other brother fights to keep him alive even to the point of sacrifice.
The story is paced from start to finish keeping the reader guessing concerning each new revelation of the family dynamic. Looking forward to more from Bazinet.
Posted by P M Prescott at 12:59 PM No comments:

Blogger friend Michael Manning had a post with stuff he has around the house and challenged his readers to do the same. Thought I'd try it. 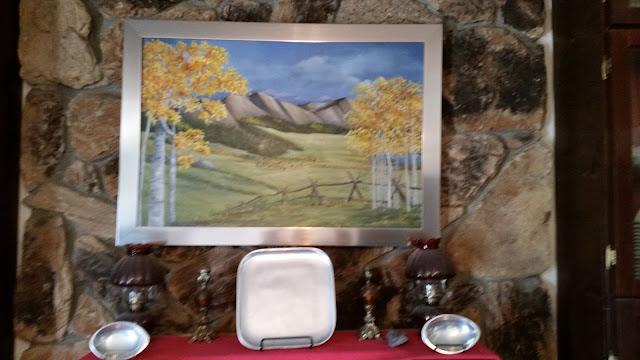 The painting is by my spiritual twin, Anne Littlewolf. The little tiny specs in front of the treeline are cows. The two Nambe ware candy dishes were retirement gifts from APS. One for Dad and the other for Mom. The Nambe platter was from the secretaries union on her retirement. Hard to see but there are two amber oil lamps on the outside and two amber candlesticks on the inside. Mom has a barrel full of amber glass and that is what I chose to keep. When she goes into independent living in a couple of weeks I have no idea what I'm going to do with all that other amber glassware. 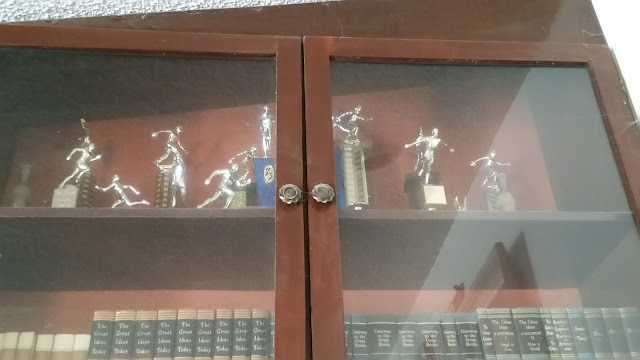 From 9th grade, (city champ in 660 yd dash) the running statue on the left until my junior year in college I accumulated a number of trophies. The biggest one for being state champ in the mile is hidden behind the center knobs. Wife and I used to bowl in a church league and we accumulated a number of trophies there as well. Arthritis ruined a good form of exercise.
Under the trophies are the beginning of a complete set of Great Books, given to me by my client to help with research on stories. He needed room in his bookcase, and now I do too. 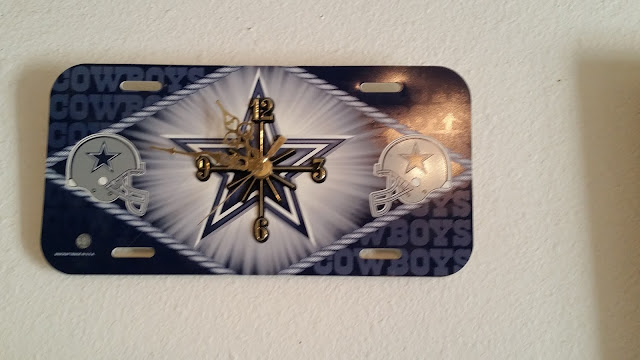 What can I say, I'm a BS Cowboys fan (before Staubach). My heroes were Don Meredith, Don Perkins and Bob Lilly. The ice bowl game was the greatest ever played even if Lantz Rentzel missed the game winning touch down pass as time ran out. I still haven't forgiven Jerry Jones for firing Tom Landry the way he did and never will. 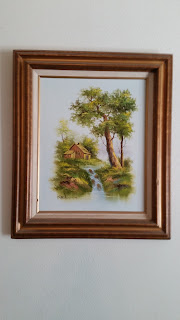 When first married wife worked as a secretary for a real estate company. The company gave oil paintings to customers when they bought a home. The company disbanded and wife was given her pick of the remaining paintings. She picked this one. It's forty years old, but it's still nice to look at. 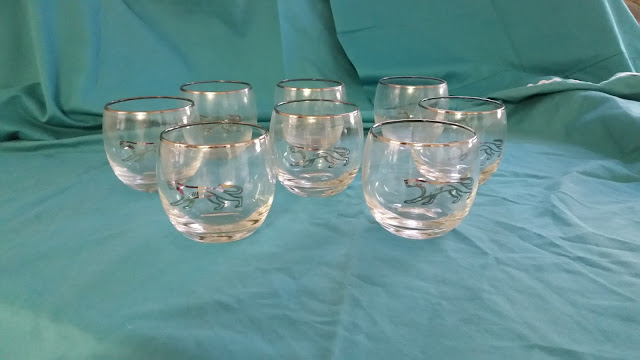 Father-in-law worked at the Lincoln/Mercury dealership in Albuquerque for 35 years. From the late 50's into the 90's as parts manager. The owner gave him this set of commemorative glasses in the year the Mercury Cougar hit the market.
Going through all their estate after my in-laws passed away my brother-in-law asked what I wanted. This was it. 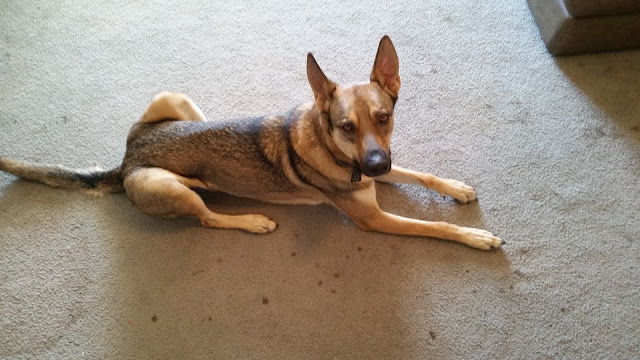 Smokey is not only around the house he's all over the house and under foot. 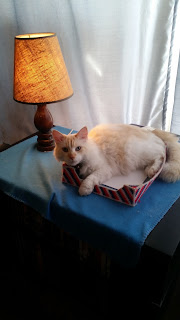 The other animal all over the house.
To all my other blogger friends why don't you try this.