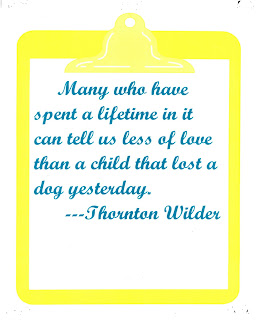 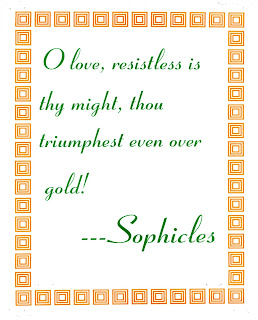 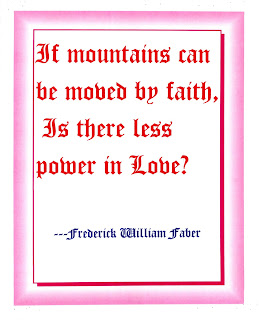 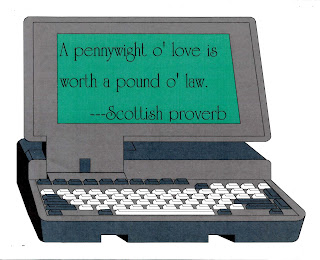 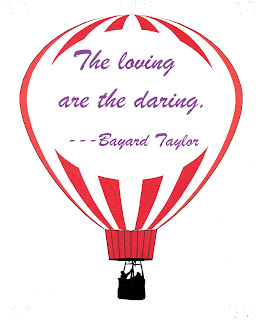 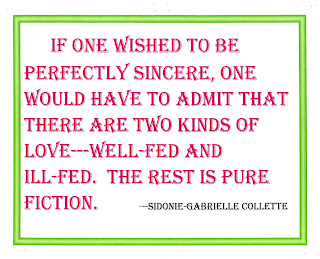 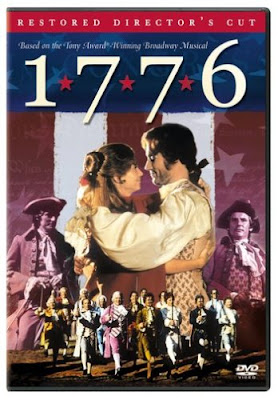 In November of 1971 Mom and Dad had season tickets to what was then the Civic Light Opera and they couldn't attend one of the preformances and gave the tickets to me and my girlfriend at the time. It was 1776. I was blown away at the performance and could remember so many witty lines. When I was in college during out nations bi-centennial the play was performed, but I couldn't attend as I was married, didn't have the money and needed to work that night.
The movie came out in 1972, but it didn't come to Plainview so I never saw it on the big screen. One of the first items I bought with my first Summer school money was a VCR and on the 4th of July 1983 the movie was aired and it was the very first movie I taped. The following summer I taught American History in Summer school in a portable. On the other side of the partition was a math class. I showed the movie and the teacher came over after class:
Math teacher: I thought you're teaching America History.
Me: I am.
Math teacher: What did you show?
Me: The movie 1776.
Math teacher: It had singing and dancing.
Me: Yes, it's a broadway musical turned into movie.
Math teacher: How is that history?
Me: It lets the students know the positions of all the colonies prior to the vote on independence and what it took to get a unanimous vote. It's also pretty good at giving them an idea of how parliamentary proceedure works.
He wasn't convenced and didn't have much of an artistic understanding.
All the years I taught U.S. or American history I showed this movie buying a copy as soon as it was on sale at Blockbuster.
After Grinnygranny and I were married it was performed at Popejoy Hall. Mom and Dad got tickets and we went with them. So I've seen it twice performed on stage and a million times on video. Try watching it six times a day over numerous years.
It was with weeping and gnashing of teeth that I took all my video players to Goodwill and converted to Blue Ray. I bought the Restored Director's cut. There are a number of lines left out in the theatrical version and one song. In this version you get a better sense of Judge Wilson and why he made the decision for independence. I knew from seeing the play they cut out Cool Cool Considerate Men  and learned that it was at the request of Richard Nixon because he thought it put conservatives ie Republicans in a negatative light. It's actually John Dickenson's and the others who opposed independence victory song thinking they've won. A shame it was cut because in the middle of the song a dispatch from Gen. Washington comes in describing the British navy's surrounding of New York and using it as a staging area for moving on Philidelphia. In the rest of the movie they talk about the Redcoats being at their door without a decent explaination. But the real crime of the cut was omitting these crucial lines:
Dickenson asks John Hancock why he isn't on their side since he hates John Adams and is a man of property. Hancock replies, "Fortunately there are not enough men of property in America to dictate polity."
Dickenson then says, "Perhaps not, but most men with nothing would rather defend the possibility of being rich than face the reality of being poor."
This in a nutshell explains why so many hundreds of thousands of Confederate soldiers died defending slavery when they didn't own slaves and why today so many with so little still vote for the party that consistently raises their taxes while cutting them for the rich and gives corporations subsidies for outsourcing their jobs. After all they may hit the lottery and be rich someday even if they are living under a bridge or in their car after having their homes forclosed and can't find a job.
I could have used that line all those years I showed this movie, but Tricky Dick didn't like it.

I looked up most of the actors in the movie, hard to imagine it's been out 40 years now. William Daniels (John Adams) Ken Howard (Thomas Jefferson) Blythe Danner (Martha Jefferson) and John Cullum (Edmund Rutlidge) are still working. Howard Da Silva (Benjamin Franklin) was a black listed actor during the McCarthy era and many of his credits are in the 1930's, 40's and 50's. The role of Franklin on Broadway and the movie restarted his career. He died in 1986. Virginia Vestoff (Abigail Adams) died of cancer at age 42 in 1982. Donald Madden (John Dickenson) died in the 80's. Quite a few of the actors were soap stars with most of them coming from Dark Shadows.
Some of my favorite lines:
John Adams:
I have come to the conclusion that one useless man is called a disgrace, two become a law firm and three or more become a congress.
This is a revolution dammit we're going to have to offend somebody.

Benjamin Franklin:
Treason is the reason given by the winners in order to hang the losers.
Careful Mr. Dickenson those who give up their freedom for temporarty safety deserve neither freedom nor safety.
Revolutions come into the world like Bastard Children, half improvise and half compromise.
If we don't hang together we will most assuredly hang separately.

Stephen Hopkins (Old Grape and Guts from Rhode Island):
Well I tell you what, in all my born days I ain't ever seen, heard or smelled an issue that couldn't be talked about. Hell yes, I'm for debating anything.
Posted by P M Prescott at 9:47 PM 6 comments: