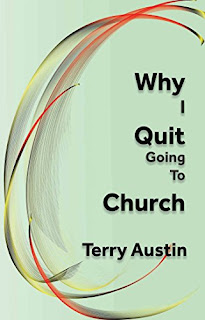 Terry Austin, a fellow Wayland alum, he was '75 I was '76, and FB friend asked for someone to review his latest book. I've already reviewed another of his books. This one hits home with me.
As Terry says in this book (picture left), "I didn't leave the Church, the Church left me."
I'm going to post a review on Amazon, but I didn't want to intrude my thoughts on the matter there.
In the book Terry explains many years helping churches fund building projects. The term is stewardship. He came to the conclusion that buildings detract from the purpose and message of trying to reach the lost to Christ. Instead of all believers spreading the good news of Jesus as we are going; we simply ask them to come to church. Let the pastor evangelize them. He explains his growth in the Lord to see the difference in today's focus on building bigger and bigger churches as contrasted to the first century church with its emphasis on helping each other and loving each other in homes or public places.
He goes into detail about the high cost of buildings in construction, maintenance, utilities, Pastor and staff. This doesn't leave much for helping the poor in the community. One of Christ's directives for the church.
His second major point is that this makes the church a business with pastor as CEO. The demands on the pastor to pay for the expenses and collect a salary have made the church more about entertainment than fulfilling the Great Commission. Pastors that can't bring in enough money are soon gone and another is given a shot, or the church dies. Rock star pastors have replaced shepherds.

Another of Terry's points is home churches. Leaving the brick and mortar and it's excessive costs for a close grouping filling the need for personal interaction. In essence becoming a Sunday School with a worship component.

His chapter named: Country of Christ, speaks to the evil of politics in the pulpit. This led to the election by professing Christians voting in a man for president that is morally corrupt.

Where we disagree is when he laments Trump as president and that members of the church voted for and still defend someone of such low character. But he admits he could not vote for Hillary. As FB friends we've disagreed on this at length.
It's not in the book, but on FB he mentioned he couldn't vote for the lesser of two evils as it was still voting for evil. In the book he gives specifics on why Trump is unfit to govern our country, but he has no specifics on how Hillary was evil.
Seems to me if he's claiming she was evil and he couldn't vote for her there should be some reasoning for the basis of evil. To not have voted for Hillary was to allow Trump to be elected.
He may post a comment after he reads this and correct me on my reasoning. Getting into a debate with Terry is like playing him in a game of chess. Believe me he waxed me all over the board at Wayland on may occasions.
He raises an issued he calls Christian Dementia. Not just the SBC, but all denominations have forgotten their roots. What makes them Baptist, Lutheran, Methodist. What they stood for just twenty or thirty years ago, and not now.
I recommend this book to all. Don't get the impression that Terry or the many unchurched have left the faith. Home churches are springing up all over.
The home church I attended was formed to reach those who were damaged by the brick and mortar churches. We were able to minister to each other for a number of years, more so than a Sunday School class could. For people of faith, this is about the only option left.