Today's question from Lydia Schoch: Lessons I learned from a book character.

The book is Friendly Persuasion by Jessamine West. William Wyler made it into about the best movie ever made. I posted a review of the movie here.
I learned a lot from a number of characters in the story.

1. The entire Birdwell family taught me that those of deep faith are human and fail to uphold their beliefs. They realize their failing, feel shame, guilt, forgive each other and then go on learning from their mistake.
Acceptance of what is to come. When told that Rebel raiders are coming Eliza says, "If they come they come, like fire or flood."
2. Jess Birdwell taught me that self doubt is vital in understanding the future. He taught me to accept all those around me, even those who condemn or judge unfairly.
3. Eliza Birdwell taught me that there comes a time when force or violence in necessary if there is no other option. When her pet goose is threatened and there was no way to keep a man from ringing it's neck she picks up broom and clobbers him over the head to stop him. Violence should be only a last resort and then to get the other person's attention.
4. Friend Purdy made me realize that of all the characters in the story he is the one most like me, to my shame. He's self-righteous, judgmental, a braggart, and hypocrite. A character named Sam Jordan summed it up when he says to him: "Whatever's right for Purdy and to be right for everyone else." I have the tendency to think those who agree with me are right and those who don't are stupid.

Books I liked that became movies or tv shows.

Lydia Schoch has a Wednesday challenge on her blog. I've only recently begun blogging with her becoming acquainted with from Berthold Gambrel.
The Wednesday challenge this week is which books we loved have been turned into movies or TV Series. Here goes:
The Far Pavilions by M.M. Kaye.
Great book. I've read the poor paper back book I got at a book exchange store in town more times than I can count. Recently bought the e-book as my eyesight works better today when I can control the font size.

I told the story to my 8th grade literature class (I did not read stories. At that age you can't take your eyes off the students for a second or things start flying.) In my novel Human Sacrifices, Jan, my protagonist reads this story to her students too, and catches hell from the parents and administrators.
It was made into a min-series. I didn't watch it when it came out and rented the video. The first half of the book on video was done only in flash backs so I don't know if on the original series they did the story of Ash as a child growing up as a playmate for the crown prince. The video only covered the second half of the book as Ashton Pelham-Martin comes back to India from England. They messed it up terribly. Ben Cross and Amy Irving play Ash and Anjuli, which wasn't a problem, but they got the story out of order. Ash goes off to Afghanistan and fights surviving the massacre of the regiment because he can blend in with the inhabitants, then he escorts Anjuli to be married. Bass Ackwards. It made no sense and put the climax of the story in the beginning instead of the end. Stupid stupid stupid.
I first read the story in the early 80's. When Dumb King George II decided to invade Afghanistan in 2002. I knew from reading this book that it would be the single biggest mistake in American History. I think that the fact we have soldiers stationed there who were in diapers when we invaded the grave yard of empires it's proven my assessment.

The Hobbit by J.R.R. Tolkien.
My 7th grade literature teacher, Mrs. Mohica, read this over a nine week period. The summer between 8th and 9th grade I read the Lord of the Rings.
Peter Jackson did a superlative job with all three books. He stayed as true to the books as a visual medium would allow. He cut out Tom Bombadil, but he can be forgiven for that. One complaint, when Frodo tries to offer the Nazgul the ring at the battle with Faramir before going into Mordor is senseless. Sauron would know where the ring is and attacked to reclaim it. Third book not needed.

The Hobbit started off well.  stuck to Jackson the story, but then just had to turn a short book into three movies. Staying with the book would make basically a movie and a half. He could have stretched it to two movies and it would have OK, but the fight with Smog in the mountain where they cover him with molten gold was just plain ridiculous. It made no sense for Smog to go after the men of Lake Town when those trying to steal his treasure were in the mountain. The extended fight scene between Thoren and Ork king was merely gratuitous.

I Robot by Isaac Asimov.
I read I Robot in 9th grade. It's an anthology of short stories giving the evolution of robotics. Asimov created a whole universe based on the 4 laws of robotics in a series of books. None of them resemble the movie with Will Smith. It was an okay movie. They made a movie based on Asimov's masterpiece short story Nightfall, and it was so god awful I turned it off and almost burned the video tape before returning to the Blockbuster.

A Boy and His Dog by Harlan Ellison.
This was a short story about an after the nuclear war apocalypse where dogs and humans were telepathically linked. The movie starring a young Don Johnson stayed fairly true to the story. What was left out of the movie was Ellison's punch line. In the story it ends with the question "Did I find love," The answer is, "Yeah, a boy loves his dog."

Ellison also had a short story entitled: Brillo. It's about the first robotic police officer. Brillo stood for metal fuzz. It's a sixties slang thing. A number of TV shows and movies have been made on this theme. Most notable is the Robo Cop movies. Ellison was pissed off that he wasn't give credit for inventing the genre.

Balloons over my house 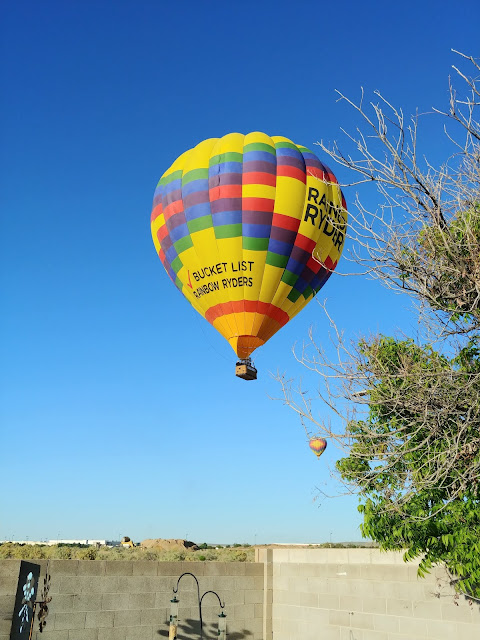 My house is downwind from the Albuquerque Balloon Fiesta Park. On clear mornings over the years the various dogs have awakened us barking at one or more of them flying over or near us. The burners make a distinctive noise that seems to set dogs off. 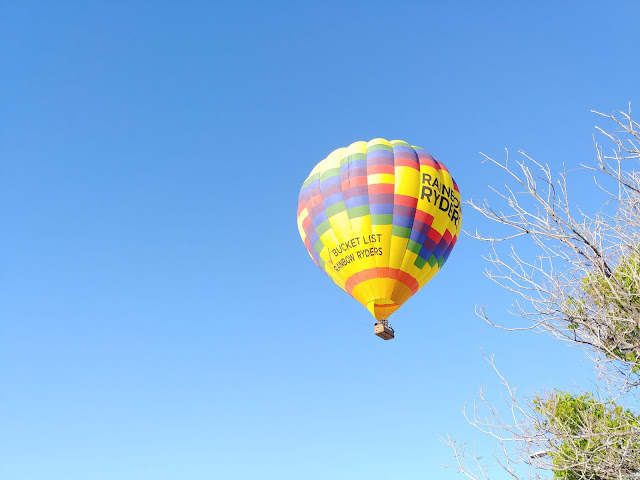 There's an empty mesa behind us and the balloons will either land and exchange passengers or deflate. These are commercial flights and business is good. The gondolas can hold anywhere from five or ten people. 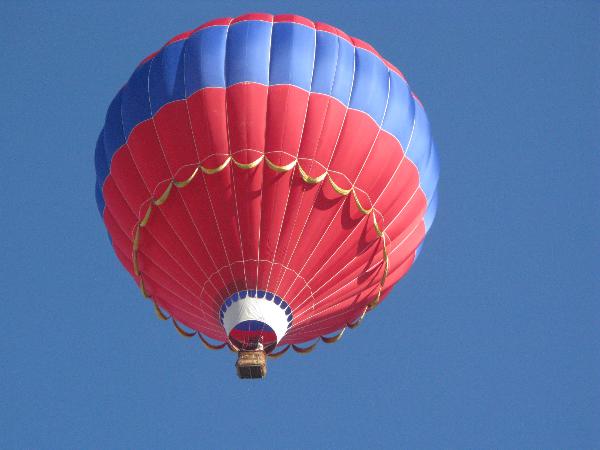 People come from all over the world to see the balloons. I only have to got out my back door and point my camera. I don't do that much anymore as its mostly the same balloons and it gets repetative. 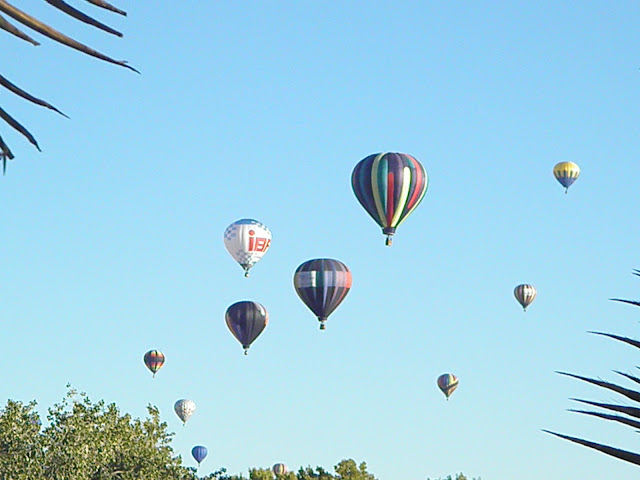 I worked at an office close to the balloon park and during the Fiesta could walk out and take pictures of a sky full of them. 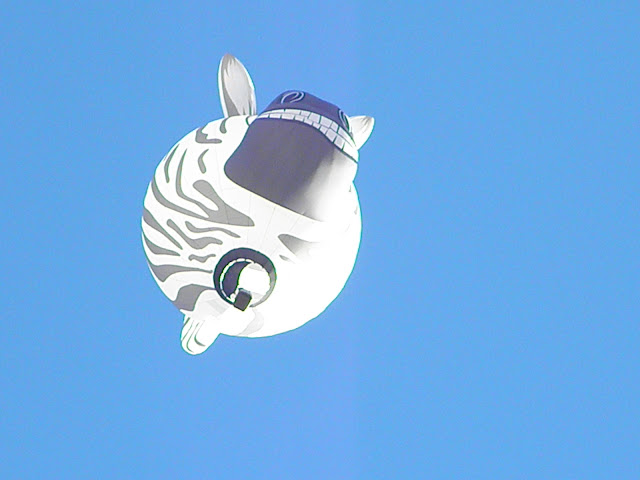 This was the Zebra special shape directly overhead. 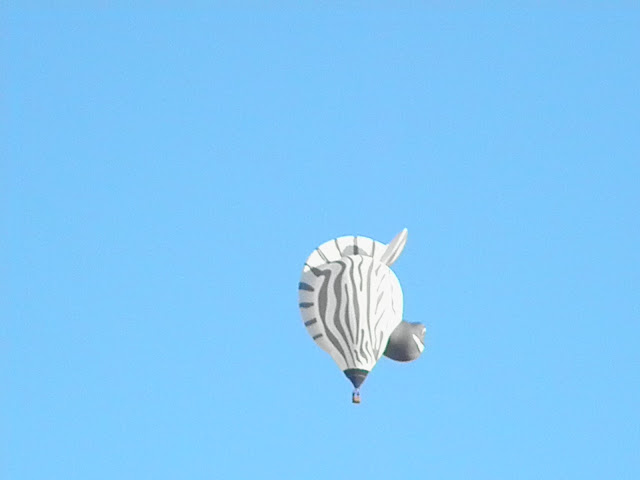 Somehow after over forty years of balloons flying over Albuquerque skies, the first one I saw was while I was in high school back in the early 70's. Seeing them never gets old.

Kindle Unlimited is great for retired old farts like me with little to do but read. Of course I read prodigiously before I became a retired old fart, but it was with real books not electronic ones. My eyes can't handle the miniscule print of most books today.
That was a preamble for my latest author find. Mark Dawson.
In the past two months I've read 21 of his books.This guy writes like crazy. It is non-stop action from page one to the heart pounding climax at the end.  The first 14 are his John Milton series. It's a simple premise. John Milton is Number 1 in Group 15. A governmental hit squad for MI6. He gets burned

out after killing over a hundred people. The problem is that this isn't a job he can retire from. He knows too much.
What prompted this attack of conscience is his alcoholism. The way he chose to forget all those he killed was by drinking it away. He starts going AA meetings. Something that Group 15 frowns upon as he could divulge state secrets. The most important part of the twelve steps in number 9. Restitution. He can't do much for all those he's killed, but his form of restitution is to help those in need around him. A kind of one man A-Team. In the first book he tries to help a single mother and her teenage son living in a project dominated by a gang. It doesn't turn out well as Group 15 sends out someone to eliminate him and innocents get caught in the crossfire.
The first few books have him being chased by Group 15 until he fights back and eliminated the paranoid head of the agency known as Control.

This leads me to the next seven books. A former Number 1, Beatrix Rose went into hiding from Control when Milton just joined the team. Control Killed her husband and kidnapped her daughter. She hid and didn't seek retribution for the safety of her child. When Milton decides to go after Control he teams up with her and they get Control to flee and get Group 15 under better management.
Beatrix gets her daughter back, but she's dying of cancer and doesn't have long to teach her how to survive without her.

This leads to a three book set of Rose hunting down the five agents that murdered her husband and kidnapped her daughter. At the same time doing intensive training for her daughter to defend herself from those wanting to use her for revenge. Beatrix is aided in this by the new Control Alexander Pope.

This is followed by a four book set, so far, on Isabella Rose after her mother dies. Alexander Pope is fired from Group 15 and Group 15 is disbanded. Pope enlists the aid of Isabella to infiltrate a private school to befriend the son of a man he suspects is supplying money to ISIS. And the stories keep coming.

I just found out that there are three Beatrix Rose novels out set during the time while she was hiding out in Hong Kong. Now I've got three more of his books to read. Mouth is drooling in anticipation.