Daughters of the West Mesa

Fellow member of Southwest Writers Workshop and Writers2writers Dr. Irene Blea is a fantastic woman. She presented at both writer's groups over the years. I read her fictional book Suzanna and thoroughly enjoyed it.
Her next work took her some time and an enormous amount of research. I need to explain. In 1990 on the west side of Albuquerque a number of young women and one fetus were found murdered and buried. The murderer has never been found or punished. There was a major excavation to uncover all of the bodies. They were all prostitutes only one wasn't Hispanic and she was Native American.
Irene decided to write a book in their memory and the affect this had on their families particularly the Hispanic community. The book is named: Daughters of the West Mesa.
I looked forward to reading the book for the number of years it took for her to write it. Here is my review. 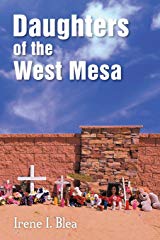 An Hispanic woman is startled to hear on the news of bones being found on the West Mesa by someone walking their dog. What's worse is that the city starts excavating the unclaimed mesa behind her house. Those murdered are separated from her by only a wall. As more bodies are discovered they are all female, in their twenties, Hispanic and known prostitutes.
Dora worries that one of those bodies yet to be identified might be her estranged daughter. As each evening newscast conveys new evidence Dora spends her days dreading a phone call making the unthinkable reality.
She starts going over her failed marriage and after finding a well paying job the decision to move away from the South Valley where her family has lived for generations. Her large extended family feel she's betrayed them and they become estranged.
Starting to second guess her decision to move out of an impoverished part of town to a nice house in a middle class neighborhood, was the cost to her daughter of growing up without cousins, aunts, uncles and grandparents worth going to better schools?
She relives her daughters rebellious teen age years and trying to fight the peer pressure of radical music, drugs and sex. Wanting her to go to college and career, her daughter joins a rock band and they loose touch. Whenever they meet she was shocked at her looks and need for money. The final time Dora refused to enable her financially. With the news of each new woman's skeletons being found her fear deepens as no matter how hard she tries there is no way of contacting her daughter to assuage her fears.

This was an extremely difficult read, and I'm sure even harder for Irene to write. At Treasure House Books in Old Town in Albuquerque, Irene's book signings have been wall to wall. She's grown a special bond with the family members of the real women found and still mourned. Irene merits all the acclaim that has accompanied this novel.
For an Anglo man it was enlightening to learn of Hispanic family culture and relationships. It was an insight into the female mind not usually explored in at least the fiction I read.
Okay, here's my problem. I know it's a man problem, but so much of the book was constant guilt, remorse, recrimination, second guessing every decision Dora made in over thirty years. By the time I finished the book I was ready to scream: "Enough with all the angst!"
From a man's perspective it was overkill, but Irene didn't write this book for men. She wrote it for the mothers of those who lost loved ones, and I'm sure they suffer the guilt, remorse, recrimination, and second guessing for every decision they made.
Posted by P M Prescott at 2:25 PM 1 comment: