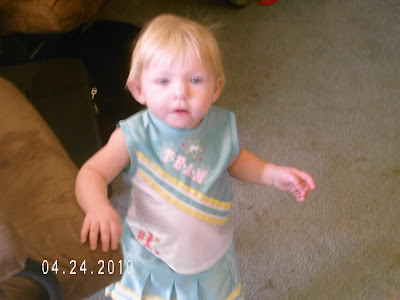 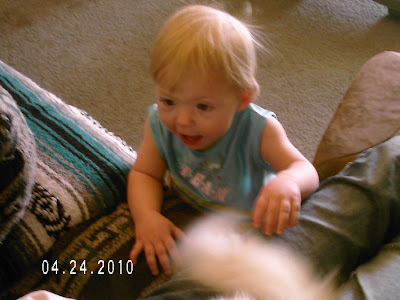 Mom was fussing that when I posted about little Abbie's first birthday that there wasn't a very resent picture of her. That's because she's started walking and is non-stop motion. Still with some patience and perseverance I got a few pictures of her in the cheerleader outfit that she looks so cute in.
Posted by P M Prescott at 10:22 AM 4 comments:

This was one long tough week.
I'm starting to get into the groove of things in my new office setting. Still when you've spent years getting off work around 3 and walking home for a nice nap; I'm a little out of shape for this driving in rush hour traffic, 9-5 stuff.
Took Mom to the hospital Tuesday evening. Daughter had been with her all day and she was getting worse. They finally admitted her around 1:30am Wednesday. Gave her some pain medication and and anti-nausia stuff. They ran tests that day and released her Thursday evening. The hospital was packed with sick kids, seems a nasty little stomach flu is making the rounds. Daughter had it two weeks ago, Son had it, then I had it and wife had it all last week.
The doctor concluded she didn't have the stomach flu, but was having a reaction to an anti-biotic.
Daughter took her out for a haircut yesterday afterwards, wife, daughter and Mom had a nice dinner at Olive Garden. Hopefully all is well with her now.
We brought her little poodle home with us for those two nights. The cat wasn't too sure about having another dog in the house and let us know about.
I'm taking wife and daughter out to Japanese Kitchen for some good teppan yaki this afternoon as a kind of reward for some of the help they've given me with this new job.
I need some rest!
Posted by P M Prescott at 8:44 AM 2 comments:

What's new at the Captain

I've decided that I will post reviews of my favorite movies at the Captain's Log blog. I've kind of run out of things to rant about that aren't becoming repetitious, and I needed something to write on that blog instead of shutting it down. I have other things to say on this one. I'll keep you posted here on the movie I'll be writing about there. The first movie is: Meet Joe Black
Posted by P M Prescott at 3:50 PM 2 comments: 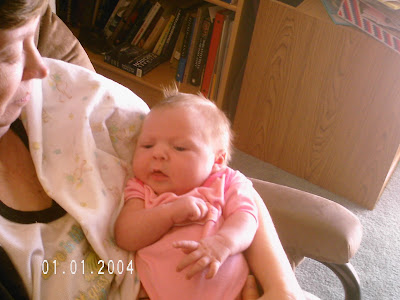 Saturday is our granddaugher's first birthday. Kind of hard to think the year has gone by so fast, and hard to remember when we didn't have her. She is so cute, today she got her first hair cut and looks even cuter.
The camera's too hard to program for the right date.
Posted by P M Prescott at 10:37 PM 6 comments:

Auntypesty's computer crashed a little over a month ago and is kaput. She's been using mine, there is a really ancient one that she can do games and stuff on in her room, but it won't connect to the internet.
Today Grinnygranny's computer went the ominous beep beep beep. There's no way all three of us can use one computer, so we went out to buy a new one. I'm using it now. A rather nice one with a 17" screen which I'll have to get used to, but it's nice. Now I just have to learn Windows 7.
When we got home Ginnygranny's computer came back to life. It somehow corrected the problem and is working. We'll take it in for a tune up next week just to make sure it's good and fixed.
This will let Auntypesty have my old one once I get stuff moved over.
Didn't need the added expense right now, but it is nice to have a computer that is twice as fast as the other one.
Posted by P M Prescott at 7:26 PM 2 comments:

It's nice to have an office, not have to worry about a bell schedule and have something to do. But working in a law office is like doing nothing but grading papers all day. I keep thinking, where's the fun in this? Then again if it was fun they wouldn't call it work.

I was looking forward to spending more time on the golf course once I retired and have been so busy I haven't been once. Ah shucks. This is only a temporary job, so when its over I'll have time to do the other things.
Posted by P M Prescott at 7:45 AM 2 comments:

What do I have in common with: Ricky Van Shelton, John Denver and Richard Crenna?
Answer: We all own or in the case of Denver and Crenna owned an original Anne Littlewolf.
In fact I'm one up on them. Anne brought me down another painting of Lone Wolf she sold the other one. Now I own two. The first one is the one on the header named Aspens in Colorado.
She now has five of her pieces on consignment in Old Town. My (spiritual) twin is going great guns in the art world. 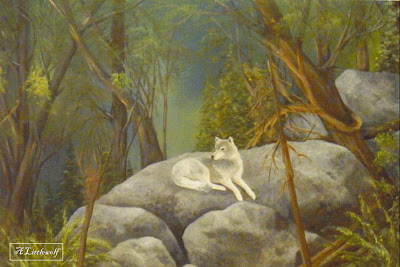 Anne Littlewolf is in town. She came in on Wed and we had a nice evening chatting and getting caught up. Yesterday we went through the Albuquerque Museum to look at the art work there, then visited a couple of galleries in Old Town. One of the gallery owners is closing his shop at the end of the month and is opening up an art school in Los Lunas. They've set up where Anne can come down a weekend a month to teach in a hands on environment. Setting this up is worth her trip down here.
Have to finish that thought later.
5:30pm
Well, I'm back. While I was writing the post this morning I got a call from a lawyer friend and he gave me a job as a legal assistant helping him out on a trial coming up next month and he needed me right then. I spent a couple of hours helping him and I'll be doing a number of things next week. I'll have to get a business license and will most likely get creamed on income tax and social security. I got to thinking: wow my retirement lasted all of one day!
While I was tied up Anne went back to Old Town and found a place that is letting her put up some of her work on consignment. We then fought with our printer to see if we could get some of her paintings to print out to her satisfaction. The pictures she has and the printer aren't up to snuff, but she does have some options up in Colorado and she's been given the name of someone here who does prints of artwork.
Then we went to Fudrucker's so she could meet the curmudgeons. Russ showed up and he was greatly appreciated. It must have been a busy day for the others. Still Anne, Grinnygranny and I had a nice time talking about various things.
Who says things slow down when you retire? I've never had to juggle so many different things at once in my life!
Posted by P M Prescott at 8:14 AM No comments: