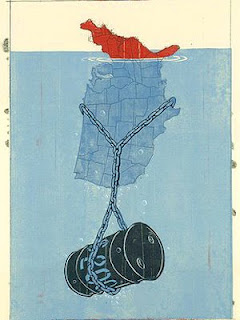 Sometimes you come upon a picture that says it all.
Posted by P M Prescott at 6:48 PM No comments:

I have been tagged for jury duty for three weeks. Went to orientation on the 20th. Checked the list for last Monday, not on the list, the rest of the week the message read no jurors needed. Checked for the coming Monday -- not on the list.
It would have been nice, while Grinnygranny is on vacation this week and next week to travel up to Nebraska to see her mother, and if the Country of Bernalillo wasn't wasting my time by giving me jury duty and then not needing me we could have.
Posted by P M Prescott at 3:34 PM No comments:

We've been looking for the past couple of years into buying a plasma or LCD big screen TV. We bought one today, took our old TV, Video, DVD Combo to Mom. As soon as we had our new 42" screen hooked up to Satellite Spiderman 3 was on. All everyone could do was ooh and ahh at the picture. Yes it's a bit decadent, but with gas prices rising we'll be staying home and watching much more TV. Not sure if that's a good thing or a bad thing.
Posted by P M Prescott at 8:37 PM No comments: 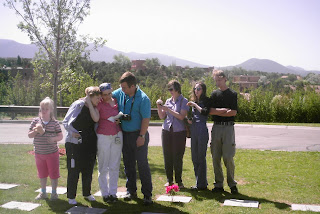 This was the visit to Dad's grave in the National Cemetary in Santa Fe. Penni is being held by Mom and her husband. Their daughter Michelle is on the other side of Mom. Grinnygranny, Auntypesty and Eddie are behind them.

We spent time walking around the plaza in Santa Fe, did some shopping, had a nice lunch at the La Fonda Hotel, and then drove to Glorieta encampment. 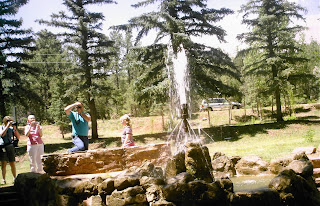 This is where Penni and David were married in 1993. The lady on the far left with the fancy camera is the news reporter from Dallas. She was really nice and supportive. She took lots of pictures and video for her piece. She's promised to send us everything she took.

They're going up the tram to the top of Sandia Mountain right now.
Posted by P M Prescott at 8:19 PM 1 comment:

Penni and her family came in today. We had a nice lunch,  David needed to take a nap so we dropped him off at the hotel and then took Penni and Michelle to Mom's. They wanted to go to the pool so I came home. Mom's in the process of buying a small patio home and she took them to see it. There's lots of work to be done on the house before Mom can move in, but she's excited about finding it and moving out of an apartment in a few months.
Auntypesty and I have a dentist appts. tomorrow, and they're planning on resting up. Penni has lost quite a bit of weight and is looking frail. There's a reporter from Dallas that will arrive in the evening. She's doing a piece on Penni. No plans for the day that I know of, Mom will think of something.
Wednesday is when we're all going to go up to Santa Fe to see Dad's grave, then drive to Glorieta so Michelle can see where Penni and David were married.
Posted by P M Prescott at 5:42 PM No comments:

Penni and her family will be here Monday. She's wanting to visit Dad's grave and then see Glorieta (where they were married in the prayer gardens).
She's been battling ovarian cancer for four years. In a previous post I mentioned the book she wrote a chapter in. She and her family are in need of all our prayers. 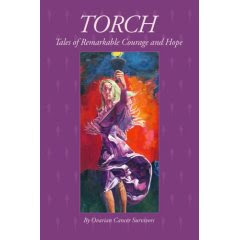 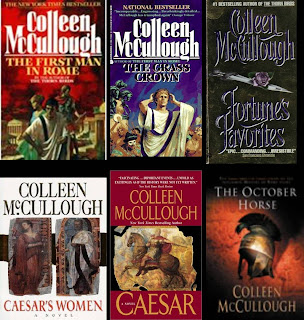 This is a superlative series of books. Colleen McCullough's work is exemplary. There are six books in all and each one is riveting. There is a glossary in the back of each book, I recommend reading it before the book to set your mind and vocabulary to the story.

The First Man In Rome: deals with Marius and how the Roman legions changed from being volunteer soldiers to professionals loyal to their commander instead of Rome.
The Grass Crown: deals with the rise of Sulla and the civil war between Marius and Sulla setting the stage for all the subsequent civil wars that tear Rome apart for nearly a hundred years.
Fourtune's Favorites: deals with the end of Sulla's reign and the early life of Julius Caesar.
Caesar's Women: deals with Caesar rising up the Cursus Honorum (political advancement) and his involvement with Pompey and Crassus culminating in the forming of the first Triumvirate.
Caesar: deals with the conquest of Gaul and is so much better narrated than reading Caesar's Gallic wars, though Ms McCullogh follows Caesar's account faithfully.
The October Horse: deals with the civil war between Pompey and Caesar, Caesar's marriage to Cleopatra and his ultimate assassination.

Ms McCullough has turned history into a page turning, engrossing story. These are what Paul L. Meier refers to as "documentary novels" and she follows his rules:
1) All persons named in the book are historical; no proper name has been invented -- if it is not known, it is not given. 2) No portrayal of any personality, description of any event, episode, or even detail contradicts historical fact (unless by author's error) 3) Only where evidence is lacking is "Constructed history" based on probabilities, used to fill in the gaps.

The main focus on the books is Caesar and she has some interesting theories about him. They do make sense. The biggest one concerns Caesar's epilepsy. She theorizes that he didn't have this particular problem as no mention is made of it before he turned 40. She proposes that he may have suffered from hypoglycemia which would make more medical sense. She explains at great length the rearranging of Cicero's speeches in what would make better chronilogical order. Other than that she stays very faithful to all historical facts and timetables.

I've always felt, due to the scope of this story that it would make a fantastic "day time drama" and would be a welcome relief from the clap trap all networks are spewing out now.

If any of you are looking for something to read that will fill up your time, here it is.

Well Hillary has conceded and endorsed Barak. The political commercials are still running. It would sure be nice to have a couple of months to rest up before they start calling each other pond scum again.

Took Ritchie out to the golf course today. He seemed to have fun running around, not that I could concentrate on my game having to keep track of him and take him potty every two holes.

Going to relax the rest of the day.
Posted by P M Prescott at 2:06 PM No comments:

Well It's About Time

Please, please, please, I'll tell you anything you want, just stop all the political commercials.
Do we have torture in America? Yes, it's called elections.
(To those professionally offended, here's a hint, Black Humor is always tasteless.)
The primary is over, if I hear a Republican use the word CONSERVATIVE or call their opponent(even Republicans) LIBERAL one more time I'll scream. My god play another record!
One good note: Little Miss Nasty pulled her mud slinging act against someone other than a Democrat, and maybe, just maybe (you can never tell with Republicans, remember we all thought Nixon was done for in 1960) that's the last we'll hear from her.
David Iglesias 2  Dominici/Wilson 0 (inside NM joke)
It won't be easy, but there is a possibility that NM could have 5 Dems in Washington after the general election. Then there's Lew Wallace's saying: "Whatever works anywhere else won't work in New Mexico."
When the rest of the country is spitting neocon Republicanism out of it's mouth with a look of disgust, the idiots here might go the other way.
Posted by P M Prescott at 7:19 AM No comments: