A few years ago I had a list of friends to visit on their blogs. I used to meet with two other guys in town that were fellow bloggers and have a dink in a bar once a month. We called ourselves the curmudgeons. My brother started getting everyone in the family blogging so we could keep in touch being scattered all over the place. I'm the last one in the family still on a blog. Bruce shut his down, bummer. I keep up with three blogs now when I used to be able to read blogs for hours. I'm going to shut down all my other blogs but Captain's Log. I still need to vent on some issues from time to time. Kind of sad in a way.
Posted by P M Prescott at 10:05 AM 6 comments:

Went to see the latest in the Superman franchise. First movie to view in 3d. Didn't want to wait three hours for a 2d showing. Not that impressed with 3d. Don't recommend it for fast paced action as it just blurs.
Of all the Superman movies this one has by far the best story line, top actors who give first rate performances instead of phoning it in. Then it devolves into smash and destroy without much redeeming value. I like a Man of Steel who struggles with self control.
Posted by P M Prescott at 8:11 PM 2 comments:

My fourth novel is nearly ready. It is my most ambitious project to date. This literary baby has been so far three years in gestation and the first novel to be multi-generational. I anticipate sending it off for publication by the end of summer. I'm going to try Amazon's Create Space for hard copy publication hoping to have a much better experience than I did with Publish America.

Please leave a comment if you think this is a book you would enjoy.

The novel is entitled The Fan Plan: Before Yellowstone Explodes

What happens when billions of people are hungry and there's no food?
How does humanity survive a volcanic winter without going back to the stone age?

A meteorite hits Northwestern Wyoming on April 1, 1965. The geology department of Trans Global Oil's computer predicts that the magma under Yellowstone will erupt in forty or fifty years caused by this impact. In geologic time from impact to explosion is a split second.
Realizing that when this super volcano explodes the shit is going to hit the fan and billions of people on this planet will die. The Chairman of the Board and President of TGO develop a plan to save civilization and our modern scientific and technological world.
The Fan Plan not only takes measures to ensure food, shelter and energy for the coming ten years of cold and darkness, but a Scientific Secret Police to protect all acquired knowledge, scientists and others from being blamed as the cause of God's wrath to keep humanity from going into another dark age.
Starting in the 1920's when Lyman Drake hits his first gusher in Breckenridge, Texas and creates Trans Global Oil to the 1950's when James Eastman marries Lyman's daughter, Sylvia, and becomes president of TGO to 1965 when the meteor strikes and the three of them develop the Fan Plan; up to 2010 when Patrick Eastman with his half-brothers and sisters with their children continue preparing for the Fan to hit in the predicted year of 2027. The Fan Plan covers the intricacies of an expanding family in an increasingly diverse society, the rise of technology over the last forty years that will aid the pending disaster as well as cultural and political upheavals along the way.
Posted by P M Prescott at 11:00 AM No comments: 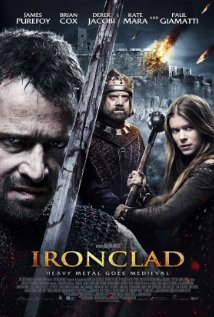 I waited until it was on Netflix. I do have a thing about chain mail and head bashing. For a movie like this is does have an A-list cast. James Purejoy has been in a lot of things, but I recognize him more from HBO's Rome where he played a remarkable Marcus Antonius. Derek Jacobi is always in movies like this, but he's never been a top name since I Claudius in the 70's. Paul Giamatti gives his usual understated performance until he gives both barrels when its needed. A little irony here after he played John Adams arguing so forcefully on rebelling against the abuses of King George to giving a diatribe in support of Divine Right of Kings while chopping off hands and feet. Kate Mara is excellent eye candy to offset the blood and gore.
Blood and gore wise this is Braveheart on crack. Its the first time I've seen a movie show the result of a two handed sword cleaving a man from shoulder to waist. It does not pull any punches on the carnage bladed weapons wreck on the human body. The middle age version of Saving Private Ryan's opening minutes.
Okay that said I liked that this movie is about the actual reign of England's Bad King John. Hollywood loves to make movies like Robin Hood and Ivanhoe where King Richard comes home from being held for ransom and saves the day for England sparing them his terrible younger brother. The Lion In Winter gives a good idea of how this royal family was really really messed up.
The setting of this movie takes place after John was forced to sign the Magna Charta. He gets the Pope, not mentioned in the movie, but it was Innocent III, who nullified the Charta. He hires an army of Danes and starts tracking down all the Barons who forced him to sign the document and hang them. Much is made in the movie that the Knights Templar were instrumental in the rebellion, but that's nonsense. It gives the reason for Purejoy, who's a Knight's Templar to lead the fight along with the Duke of Albany against Bad King John by taking a hand full of men and defending a vital castle protecting London waiting for a French army to cross the channel and relieve them. There are numerous assaults and the movie shows just how brutal siege warfare is.

The historian side of me laments what this movie leaves out of a crucial and fascinating time in history that is very often overlooked. High school and even college history texts which is what most of the population knows of history; mention the Barons forcing Bad King John to sign the Magna Charta, but nothing about the fight to keep it valid. This movie attempts it, but is too simplistic. So history teacher decides to set the record straight in a simplified summation.
And that is how the Magna Charta becomes the bedrock document of England's and our Constitution.
So remember there are three GOOD things that come from the reign of Bad King John:

footnote: Richard's queen Berengaria, is the only queen of England that never in her lifetime set foot on the island.
Sometimes good thing come from failures. Don't get me started about Cardinal Wolsey.
Posted by P M Prescott at 8:17 PM 2 comments: