Why am I still a Cowboys Fan?

I've followed the Dallas Cowboys since forever. Don Meredith was QB, All American from UNM Don Perkins was RB. Suffered BS (Before Stauback) when Tom Landry would alternate QB's with each possession between Stauback and Morton. Hoping beyond hope that Danny White would somehow figure a way to win the conference championship game and make it to the Super Bowl, only to be crushed time and again. The agony has always been worse than the ecstasy.
Wife and I timed her contractions when she went into labor with our daughter while watching the Pokes lose a game the last year Landry was coach.
Ah the glory days of Super Bowl victories, the despair of Super Bowl losses, but at least they went to the playoffs, won more than they lost and if they had a bad year there was always the Denver Broncos to fall back on especially with Elway.
Since Aikman and company, what a great team they had for a few years, there's been nothing worth rooting for, but still every game the adrenaline ramps up, I hold my breath on important plays and hope with futile hope that Romo will not get intercepted in the last minutes of a game or the center won't hike the ball over his head, or a wide open receiver drops the ball in the end zone or when they do catch the game winning touchdown at the last second a ref drops a yellow flag.
I'm sure everyone who has spent 50 or more years following a beloved team has similar feelings because all teams have their good years and bad years.
I really wonder about Detroit fans when their team has never been to the Super Bowl. Come to think of it, have the Jags and Panthers ever gone to the big game? It must gall Cleveland fans that the team they rooted for that never made it to the Super Bowl moves to Baltimore and has won two.
As I said I follow the Broncos, yell and scream when they score or get intercepted, but I don't get the adrenaline rush in their games like I do with the Cowboys it's just not the same.
Posted by P M Prescott at 11:18 AM 4 comments: 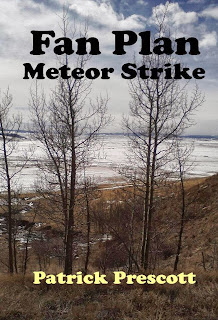 I sent the manuscript and cover to Lithexcel on Tuesday expecting to have ten books in hand by now. They haven't even given me a quote yet and aren't returning my calls. Guess I'll need to find another printer.
Smashwords has accepted the manuscript, but not the cover. This means the book will be on their site, but won't go out on their list to other companies like I-books or Nook. They want the picture to be 1400 pixels in width and 1700 pixels in height. Using Publisher I can get my front cover to 1000 pixels in width and 1350 in height. That's 24" in height and 17" in width, what the fuck to they want a wall size painting?
They recommended using a free picture program named Gimp. I downloaded it. Actually got the dimensions they want, but can't size the picture to the frame. Oh the program is free, but if you want to figure it out Amazon sells about five books starting at 25 bucks to 30 bucks.
I've removed the book from SW.
Speaking of Amazon, they at least have a cover maker program, but you use it while publishing and you can't save the picture or download the program. Amazon has the KDP select where their members on Prime can borrow a book for free every month. If you put your book up for this you can't be e-published anywhere else, for three months.

Lithexcel finally got back to me and I'll have the first ten books Tuesday.
Posted by P M Prescott at 11:18 AM 2 comments: 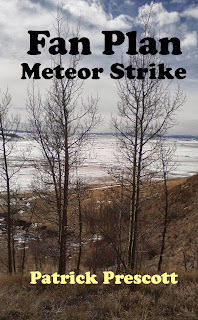 Today I sent Fan Plan Meteor Strike to the printer and I should have the hard copy in hand by the end of the week. I've e-published it on Smashwords and it is available now for a mere ninety-nine cents until Monday October 21 when I will raise the price of the e-book to $1.99 and e-publish on Amazon at the same price, but it will be available on Kindle Direct Publishing so those who are members of Amazon Prime can borrow the book for free.The paper and ink book will sell for $10.00 each. The beauty of doing my own publishing is that I can retail the books for what would be my cost through Create Space and other print-on-demand companies. Those companies also insist that e-books sell at paper and ink book prices.
I need to write the second book in the trilogy Fan Plan Next Generation, edit Human Sacrifices and Vander's Magic Carpet to publish them in paper and ink before finishing the trilogy with Fan Plan The Count Down. Methinks there is much work to be done.
Posted by P M Prescott at 2:49 PM 2 comments:

It's that time of year again in Albuquerque. Our international balloon fiesta. We stopped braving the crowds after our kids became adults and leave it to them to take the grandkids. Where I work is very close to the park and it's easier to watch from there. Here's a video of a zebra balloon that flew overheard Saturday.

Today in the NY Times there's an obituary of the show. It finished with these words:

But the show never fully spelled out why Walt broke away from Gretchen and Elliott in the first place.

There were hints throughout the series. On several occasions, Walt accused them of cheating him out of his share; that bitterness seemingly helped steer him into his life of crime. But it wasn’t clear that his version was correct — in an episode where they confront each other at a restaurant, Gretchen said that Walt left her without any explanation. And the true story never came out.
“Breaking Bad” brilliantly tracked Walt’s transformation from teacher to criminal mastermind. But it’s still a mystery why that talented chemist turned his back on fame and fortune and became a humble high school chemistry teacher.
That is one secret Walter White took to the grave.
Here's my two cents worth on the descent of Walter White brilliant scientist to zombie science teacher. To a certain degree the first year of the show is the anti-Mr. Holland's Opus. There's more to being a teacher than getting a paycheck, Walt never understood that.
Posted by P M Prescott at 11:33 AM No comments: