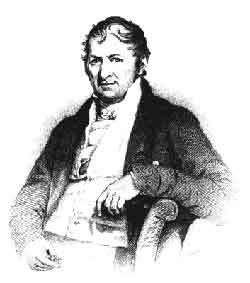 Eli Whitney (December 8, 1765 – January 8, 1825) was an American inventor. He is best known as the inventor of the cotton gin, and less well known for his introduction of interchangeable parts in the manufacture of firearms.
Cotton gin
The cotton gin is a mechanical device which removes the seeds from cotton, a process which, until the time of its invention, had been extremely labor-intensive. The cotton gin was a wooden drum stuck with hooks, which pulled the cotton fibers through a mesh. The cotton seeds would not fit through the mesh and fell outside. Whitney occasionally told a story where he was pondering an improved method of seeding the cotton and he was inspired by observing a cat attempting to pull a chicken through a fence, and could only pull through some of the feathers.
A single cotton gin could generate up to fifty-five pounds of cleaned cotton daily. This contributed to the economic development of the Southern states of the United States, a prime cotton growing area; some historians believe that this invention allowed for the African slavery system in the Southern United States to become more sustainable at a critical point in its development.
Interchangeable parts
Though Whitney is popularly credited with the invention of a musket that could be manufactured with interchangeable parts, the idea predated him and he never succeeded at it. The idea is credited to Jean Baptiste Vaquette de Gribeauval, a French artillerist, and credits for finally perfecting the "armory system," or American system of manufacturing, is given to Captain John H. Hall. In From the American System to Mass Production, historian David A. Hounshell described how de Gribeauval's idea propagated from France to the colonies via two routes: from Honoré Blanc through his friend Thomas Jefferson, and via Major Louis de Tousard, another French artillerist who was instrumental in establishing West Point, teaching the young officer corps of the Continental Army, and establishing the armories at Springfield and Harper's Ferry.
By the late 1790s, Whitney was on the verge of bankruptcy and cotton gin litigation had left him deeply in debt. The War Department issued contracts for the manufacture of 10,000 muskets. Whitney, who had never made a gun in his life, obtained a contract in January, 1798 to deliver ten to fifteen thousand muskets in 1800. He had not mentioned interchangeable parts at that time. Ten months later, Treasury Secretary Wolcott sent him a "foreign pamphlet on arms manufacturing techniques," possibly one of Honoré Blanc's reports, after which Whitney first began to talk about interchangeability. After spending most of 1799-1801 in cotton gin litigation, Whitney began promoting the idea of interchangeable parts, and even arranged a public demonstration of the concept in order to gain time. He did not deliver on the contract until 1809, but then spent the rest of his life publicizing the idea of interchangeability. (Hounshell, pp 30-32)
Whitney's defenders have claimed that he invented the American system of manufacturing -- the combination of power machinery, interchangeable parts, and division of labor that would underlie the nation's subsequent industrial revolution. [wikipedia]

Questions: A) Did you ever feel remorse for making slavery profitable in the South? B) Did you really get the idea of the cotton gin from watching a cat go after chickens through chicken wire or did you make that up? C) Did you ever give Blanc credit for giving you the idea of interchangeable parts? D) Are you proud of the American system of manufacturing that you started?
Posted by P M Prescott at 12:59 PM