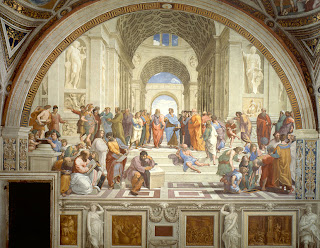 Raphael Sanzio, was born on April 6, 1483. He was born in the town of Urbino, Italy, where he lived until age 11. After his father died, Raphael went to the town of Perugia to be an apprentice of the painter Pietro Perugino. Raphael picked up the usage of shade and light with Perugino, One example is the brilliant The Marriage of the Virgin created while Perugino’s apprentice. Even then, Raphael had a great understanding of depth and perspective; although the background stands out, you can still notice the people in the foreground without being distracted. These people are shown having emotions instead of being motionless; some characters are making very noticeable actions and a lot of movement, making the people appear realistic.
In 1504, Raphael moved to Florence, where he studied Michelangelo’s use of anatomy and Leonardo da Vinci’s use of light and shadow. Raphael's Madonnas, portrayed Mary as a loving, caring human woman. Many other artists before Raphael portrayed Mary as an angelic-like woman that did not look too much like a human woman…
The School of Athens is arguably Raphael’s most famous piece. It includes his use of depth and perspective and the action and interaction of the people. The School of Athen's setting is not a school. It is actually a gathering of philosophers and scientists.
The center pair is Plato and Aristotle, and each character’s side represents a type of philosophy. On Plato’s side, philosophers are wondering about the mysteries of the world. On Aristotle’s side are philosophers and scientists concerned about nature and mankind.
Baldassare Castiglione is possibly Raphael’s most famous portrait. The subject shown is posing in the sort of way that Leonardo’s Mona Lisa subject posed; it influenced such painters as Titian and Rembrandt.
Raphael died of a fever on his 37th birthday by his unfinished painting, The Transfiguration, located in the Vatican. His best pupil, Giulio Romano, finished the painting. [wikipedia -- with a great deal of editing by this blogger. Whoever wrote this piece for them may know art, but not how to write coherently.]

The Renaissance was another crossroads for Europe lingustically, artistically, architecturally, financially and intellectually. When you think of the Renaissance, though, Chaucer, Shakespeare, Cervantes, Baccacio or Guerte don't come to mind. Instead most people think of statues like Michealangelo's David, or Leonardo's Last Supper.
For every party there has to be a party pooper, and Florence had a real piece of work in a guy named Savonarola. He gained power and had many masterpieces burned in the town square in what he called "The Bonfire of the Vanities", eventually he pissed off the Pope and was burned himself. But what Wikipedia left out of it's bio was that many works of Rafael were burned up because they were too secular including nudes. After this bonfire Rafael only painted religious themes and never returned to secular works.

Questions: A) How did you feel seeing so many of your paintings being burned? B) Did you feel vinicated when Savonarola was executed? C) Once Savonarola was dead and the Medici's were back in power, why did you not recreate them? D) Even in your own time everyone recognized The School of Athens as a Masterpiece, why did you forsake secular themes for the rest of your life?
Posted by P M Prescott at 11:55 AM

i am reading these i just feel so stupid and have nothing intellectual to say but i am reading.

The fact that you are reading them makes me happy.