Interview 5 oops out of order 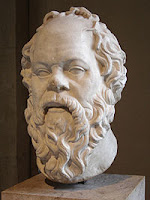 In his use of critical reasoning, by his unwavering commitment to truth, and through the vivid example of his own life, fifth-century Athenian Socrates set the standard for all subsequent Western philosophy. Having served with some distinction as a soldier at Delium and Amphipolis during the Peloponnesian War, Socrates dabbled in the political turmoil that consumed Athens after the War, then retired from active life to work as a stonemason and to raise his children with his wife, Xanthippe. After inheriting a modest fortune from his father, the sculptor Sophroniscus, Socrates used his marginal financial independence as an opportunity to give full-time attention to inventing the practice of philosophical dialogue.
For the rest of his life, Socrates devoted himself to free-wheeling discussion with the aristocratic young citizens of Athens, insistently questioning their unwarranted confidence in the truth of popular opinions, even though he often offered them no clear alternative teaching. Their parents, however, were often displeased with his influence on their offspring, and his earlier association with opponents of the democratic regime had already made him a controversial political figure. Although the amnesty of 405 forestalled direct prosecution for his political activities, an Athenian jury found other charges—corrupting the youth and interfering with the religion of the city—upon which to convict Socrates, and they sentenced him to death in 399 B.C.E. Accepting this outcome with remarkable grace, Socrates drank hemlock and died in the company of his friends and disciples.
Questions: A) Do you approve of the Socratic method as it is practised today? B) Do you think the charges you were convicted of were just? C) Why didn't you fight harder in your defense?
D) How does it feel to be considered the Father of Western Civilization?
Posted by P M Prescott at 12:55 PM

In a Philosophy class I took in college we used a textbook called The Presocratics (Heraclitus, Anaximander etc.) This is a fascinating post!