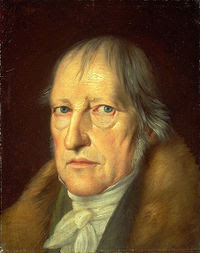 When I started this dozen interviews I didn't think it would be quite the undertaking it turned into. For my various readers I hope it was educational and enlightening.

Georg Wilhelm Friedrich Hegel
Born in Stuttgart and educated in Tübingen, Georg Wilhelm Friedrich Hegel devoted his life wholly to academic pursuits, teaching at Jena, Nuremberg, Heidelberg, and Berlin. His Wissenschaft der Logik (Science of Logic) (1812-1816) attributes the unfolding of concepts of reality in terms of the pattern of dialectical reasoning (thesis — antithesis — synthesis) that Hegel believed to be the only method of progress in human thought, and Die Encyclopädie der philosophischen Wissenschaften im Grundrisse (Encyclopedia of the Philosophical Sciences) (1817) describes the application of this dialectic to all areas of human knowledge. Hegel's Naturrecht und Staatswissenschaft im Grundrisse and Gundlinien der Philosophie des Rechts (Philosophy of Right) (1820) provide an intellectual foundation for modern nationalism.
Hegel's absolute idealism is evident even in the early Phänomenologie des Geistes (Phenomenology of Mind) (1807). There Hegel criticized the traditional epistemological distinction of objective from subjective and offered his own dialectical account of the development of consciousness from individual sensation through social concern with ethics and politics to the pure consciousness of the World-Spirit in art, religion, and philosophy. The result is a comprehensive world-view that encompasses the historical development of civilization in all of its forms.
©1996-2006 Garth Kemerling.Last modified 9 August 2006.Questions, comments, and suggestions may be sent to: the Contact Page.
The our country is at a crossroads of philosophy in this election. Do our politician serve the People, or do the People serve our Politicians? The crossroad of Jefferson and Madison's "Piece of paper" as George W, Bush referred to it with disdain or the philosophy of Absolutism. Do we think in terms of conflict as suposed by Hegel's Dialectic, where there is no right or wrong, but winners and losers. Those that keep insisting that we "stay the course" in Iraq and Afghanistan until we "win" and that by winning everthing will be alright seem to live by the Dialectic and the concept of Absolutism -- absolute power. Frederick Clarkson sums up this philosopy with the title of his book: Eternal Hostility.
Questions: A) When you were writing Philosophy of Right, did you have any idea the impact it would have? B) Did you envision both National Socialism and Communism deriving from your thoughts? C) What do you think of the actions by those who follow your social system? D) Do you stand by your philosophy or would you change it.
Posted by P M Prescott at 10:42 AM

World War II submarine? Just guessing here.
1453 is when Constantinople fell, 1492 Columbus, Cortez's returned to Spain in 1541, so it's not conquest of Mexico and too early for Pizzaro. That particular date doesn't ring a bell. Let me know.