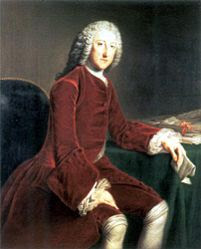 
William Pitt. who served as Prime Minister from 30 July 1766 to 14 October 1768, was born on 15 November 1709, the second son and fourth of seven children of Robert Pitt and his wife Lady Harriet Villiers. The family was not aristocratic and the politicians in the family relied on connections and their own abilities to make their way in life. Between 1719 and 1726, Pitt was educated at Eton and then went up to Trinity College Oxford…
Pitt entered political life in 1735 when he was elected as MP… In 1737 he was appointed Groom of the Bedchamber to the Prince of Wales… In October 1744 he was bequeathed £10,000 by the Duchess of Marlborough for his opposition to Walpole. The money was well-received because Pitt was perpetually in debt.
In 1746 Pitt was appointed Paymaster General, a post which carried Cabinet status… Pitt married Hester Grenville, sister of Earl Temple and George Grenville. Hester was 23 years his junior. The couple had three sons and two daughters: William (Pitt the Younger) was their second son.
In 1756 the Seven Years' War broke out; Pitt was Secretary of State with sole charge of the direction of the war and foreign affairs. During the early years of the war, Britain suffered a number of reversals but late in 1758 the army began to make inroads into French control of Canada including the capture of Fort Duquesne which was renamed Pittsburgh (Pennsylvania… Pitt had fulfilled his promise to "save his country". He then wanted to press home Britain's advantage by declaring war on Spain before the Spanish had time to prepare for and declare war on Britain…. The new king, George III, and his advisers - particularly the Earl of Bute - were reluctant to extend the war. Pitt's position was made untenable and he resigned in 1761…
In January 1765, Sir William Pysent - a total stranger - left his Somerset estate of Burton Pysent to Pitt. The estate was worth about £40,000. In the same year the king made overtures to Pitt for the formation of a ministry. Pitt was in poor health and also was aware that he was the king's last resort for PM so he refused. Rockingham formed a short-lived ministry and in 1766 Pitt became PM in his own right but now elevated to the peerage as the Earl of Chatham. It was an unstable ministry for a variety of reasons:

America
Townshend unilaterally reverted to Grenville's policy for America. He revived the financial demands on the colonies with the 1767 American Import Duties Act, often known as the Townshend Duties. During the Stamp Act crisis, the colonists had differentiated between internal and external taxation and Townshend made use of this in his policy. Townshend's taxes were 'external' and had the same aim as the Sugar Act: they were intended specifically to raise a revenue from America. He put small duties on lead, paint, glass, paper and tea, goods that were essential to the colonists. All had to be imported from Britain in British ships, and by taxing at source, evasion was impossible. The levying of these duties led to:

Over the next ten years, Chatham appeared from time to time in parliament to support or attack the government, depending on its policies. He tried desperately to avert open conflict with the American colonies but each time he failed to get his own way he retired to the country, ill. On 7 April 1778 he attended the House of Lords for a debate on the situation in the colonies with the intention of opposing the Duke of Richmond's motion to give the colonies their independence. He spoke against Richmond, who responded. When Chatham rose again to reply, he opened his mouth, clutched his chest and collapsed on the Duke of Portland. Chatham was carried from the House of Lords and taken to Hayes where he died on 11 May 1778. He was 69 years old.

Questions: A) Would America still be a part of the British Empire had George III not forced you out of office in 1761? B) Would the American Revolution never have happened if Parliament had listened to you between 1761 anc 1765? C) Knowing that the power in Parliament is in Commons, why did you want a peerage? D) After Lexington and Concorde it took the colonies over a year to declare Independance, with your health failing, could anyone else have healed the breach?

No we would NOT still be British. Sooner or later another group of people would be tired of oppression & do the same thing. MORE importantly it was preordained by God. Which is WHY we need to BELIEVE in Him & TRUST him. The USA today needs to be careful of the same attitude. We are not going to all kill each other..we can destroy ourselves without a single shot.