I hit a hot button with Isaac Newton. "Thank you," he said with a smile on his face, bowing in gratitude.
Today I thought I'd explore a couple of posts on Scott Horton's No Comment blog. He interviews Gary Wills the author of numberous books exploring the historical and contectual meaning of the Bible. A simplified version of what I was taught at Southwesstern Baptist Theological Seminary (back before the Philistines raped and plundered that institution) was called Form Study, there was a German name for it, but I don't want to misspell it and look foolish.
I'm going to post Wills' translation of John 1 -14, and then NASV for comparison. A few of the questions and answers follow.

At the origin was the Word,
And the Word faced God,
And the Word was God;
This faced God at the origin.
Through Him all things came to exist,
And without him nothing that exists existed.
What existed in him was vivifying,
And the vivification was a light to men,
And the light shone into the darkness,
And the darkness did not cope with it.
He was in the universe,
And through Him the universe existed
Yet the universe did not recognize Him.
He came to his chosen ones,
Yet His chosen did not welcome him.
But to all those who did welcome him
He gave the privilege of being God’s offspring.
And the Word became human fleshAnd bivouacked with us.
And we have seen his splendor,
A splendor of God’s only Son,
Supreme in favor and fidelity.
Since of his supremacy
We all have our share,
Favor answering favor.
–John 1:1-14 (ca. 90 CE)(English transl. Garry Wills, following Raymond E. Brown, The Gospel According to John)

10 He was in the world, and the world was made through Him, and the world did not know Him.
11 He came to His own, and those who were his own did not receive Him.
12 But as many as received Him, to them He gave the right to bcome childre of God, even to those who believe in His name,
13 who were born not of blood, nor of the will of man, but of God.
14 And the Word became flesh, and dwelt among us, and we beheld His glory, glory as of the only begotten from the Father, full of grace and truth.

Wills is a leading expert on the Greek of the Christian scriptures, and he has put his skills as a textual analyst to work in a series of penetrating studies of sacred texts: ‘What Jesus Meant,’ ‘What Paul Meant,’ and the last in the series, and the subject of this interview, ‘What the Gospels Meant.’

Horton: By putting the Gospels in the setting of the communities in which they arose, aren’t you stripping away the mysteries? How do you cope with this criticism?
Wills: Since I believe in the divinity of Jesus, there is no way I can reduce the mystery of that fact. To look at the history and nature of the gospels does not do so. To present ignorance of the history as a mystery to be revered is an exercise in false religiosity. As Augustine said, God wants us to use our reason in reading Scripture; otherwise he would not have given us reason in the first place.
Horton: You have presented the view, based largely on textual analysis, that the original texts present a view of women that is far more accepting of them and their role in the church than later evolved in the established churches, which you term “misogynistic.” Can you give some examples of this? How do the church hierarchies cope with scholarship that undermines their views about the role of women?
Wills: Recent Popes have defended the subordinate position of women in religious activity by saying that Jesus did not ordain women as priests. But neither did he ordain any men as priests. There are no priests in the letters of Paul or the gospels. Paul never calls himself, or Timothy, or any of those he writes to, priests. He does call a number of women his “co-workers,” the term for his fellow evangelists. He says there were women prophets, and one woman, Julia, was an apostolos (”apostle”), his own highest title.
Horton: The opening verses of John must be among the most powerful and poetic words of Christian scripture. You tell us that this text is likely a “hymn” and that it has been edited to serve as a preface to a text that begins with the story of John the Baptist. Can you explain the basis for this interpretation?
Wills: Raymond Brown’s analysis of the opening of John’s gospel is brilliant. He points out that the poetic structure is broken by prose inserts, connecting the hymn with the treatment of John the Baptists that follows it. He concludes that the gospel most likely began with the Baptist material (as Mark’s does), but that these connective sections were added when the poem was placed at the outset of the gospel. 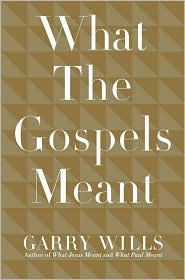