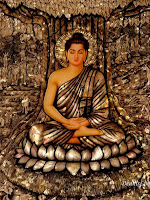 When Siddhartha Gautama was born, a seer predicted that he would either become a great king or he would save humanity. Fearing that his son would not follow in his footsteps, his father raised Siddhartha in a wealthy and pleasure-filled palace in order to shield his son from any experience of human misery or suffering. This, however, was a futile project, and when Siddhartha saw four sights: a sick man, a poor man, a beggar, and a corpse, he was filled with infinite sorrow for the suffering that humanity has to undergo. After seeing these four things, Siddhartha then dedicated himself to finding a way to end human suffering. He abandoned his former way of life, including his wife and family, and dedicated himself to a life of extreme asceticism. So harsh was this way of life that he grew thin enough that he could feel his hands if he placed one on the small of his back and the other on his stomach. In this state of wretched concentration, in heroic but futile self-denial, he overheard a teacher speaking of music. If the strings on the instrument are set too tight, then the instrument will not play harmoniously. If the strings are set too loose, the instrument will not produce music. Only the middle way, not too tight and not too loose, will produce harmonious music. This chance conversation changed his life overnight. The goal was not to live a completely worldly life, nor was it to live a life in complete denial of the physical body, but to live in a Middle Way. The way out of suffering was through concentration, and since the mind was connected to the body, denying the body would hamper concentration, just as overindulgence would distract one from concentration. [Wikipedia]

Questions: A) If you had been born into poverty, then become rich and found yourself in a pleasure filled palace, would you have been as easily influenced by the music teacher?
B) You had the choice of being great in your lifetime or influencing the world for all time. Why did you choose the eternal over the immediate? C) What would you think of our technological age? D) How would you evaluate Maslow’s Hierarchy of Needs?
Posted by P M Prescott at 8:45 AM

Anonymous said...
This comment has been removed by a blog administrator.
10:35 AM