Today's topic: What are my non-bookish hobbies? 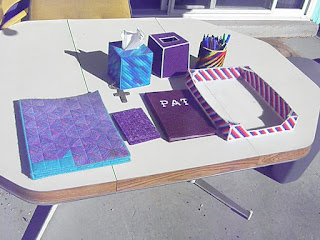 1. Plastic Canvas: It's getting harder and harder to do this as Hobby Lobby is the only place that still sells sheets of plastic canvas, and I hate having to patronize those bastards. We, also wife and daughter, make tissue box covers, book covers, notebook covers, desk calendar borders, coasters, placemats, with the scraps book marks, picture frames. It gives us something to do with our hands while watching TV, and keeps me awake in the third quarter of football games. You have no idea how many skeins of yarn we have in plastic tubs and plastic file cabinets and anywhere else my wife can squirrel them away.

I used to have my desk in my classroom with my file folder basket, desktop calendar edges, sticky note holder, pen and pencil holders, letter sized note pad folder, paperclip box all in plastic canvas in school colors. Every time I switched schools I started over.

What we  make is great as Secret Santa gifts, though once the person gets it the Santa isn't much of a secret. When I was doing book signings I had small note pads in covers that I gave for free if someone bought my book. A few women bought my book just for the note pad as it fit in their purse. I refused to sell the notebook if they didn't buy my book.

We've gone to arts and crafts fairs over the years and there were booths selling plastic canvas creations. Mobiles, castles, cars and trucks, all kinds of creative stuff. We've never been that involved with it, They want a fortune for it and the stuff never sells. This isn't a hobby for making money. 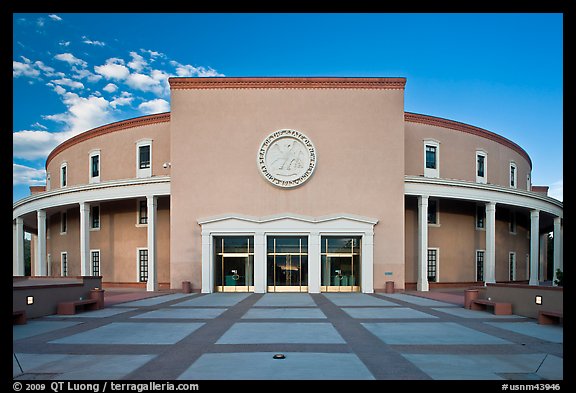 2. Politics. I was a Fedrep for the teacher's union. I lobbied in Santa Fe on behalf of education in the Round House. What we call the state capital building. I was also a ward chair for my district for the Democratic Party.

I chaired the state Democratic platform committee in 1996 and wrote the state article adding sexual orientation to the Civil Rights act, which passed for the state. That year under Bill Clinton the national convention adopted this provision.

When I retired I joined the AFT-NM Retirees union and was president for four years. My parents were charter members of the retirees and I replaced my mother as president. There was no greater lion in the Round House than my Mom when it came to stopping the Republicans from trying to raid our retirement fund, like they did in Texas.

For ten years I sponsored YMCA's Youth and Government at two high schools. This was an introduction to students in the political process. Y&G had a house of representatives, senate, governor, Lt. governor and secretary of state. One of my students is currently the secretary of state for New Mexico. Not bad for an inner city high school known mostly for its gang problem.

Each representative or senator was required to submit at least one piece of legislation. To liven things up after submitting a serious bill they could add a joke bill. After each session the YMCA sponsor would give the bill books to real legislators.

One of the joke bills was requiring seat belts for dogs and a carrier for cats in cars. This one actually became law in New Mexico. One year when the schools were all getting sexual harassment training, one of my boys wrote a bill entitled: If they're going to wear it, we have the right to look. He won first prize for presentation, and it passed with 70% of the students being female.

I held weekly meetings with the students to work on their bills or position paper. Those who chose to do newspaper were given writing assignments sent to me by the newspaper sponsor. The first year I had a number of students do newspaper. The word got out that it was all work and no fun and none signed up for it again.

There was a moot state supreme court that heard cases, and a council. The council required the students to write position papers. Those position papers were then used the following year for the legislation.

While the regular session was going each year we had Pre-leg. We bussed up from the entire state around two hundred kids. For the morning session the students sat in on committee meetings and the opening sessions of the house and senate. They would stop by the offices of their representatives and sometimes get to meet them or leave their name and school with the secretaries.

I got to do some good lobbying at pre-leg, even offered my two cents to help kill a voucher bill that looked like it would pass. New Mexico still does not have a school voucher bill.

In the afternoon we would all meet in a large meeting hall and work out the nuts and bolts of the model legislature. The students would be led by the executive branch, and the sponsors got to watch them make magic. All bills and position papers had to be turned in at this time for the bill books and council book to be ready for the model legislature. This was always student led.

A couple of weeks after the legislative session ended we would have our model legislature. We would have from a hundred and fifty to two hundred students and it was a dream for the sponsors. This was student led, we just watched and made gestures to the student leaders to keep the process going if it got too rowdy.

Saturday morning was travel and get into the motel. A newspaper reporting which schools were there, who the leaders were and what committees each student was assigned to. It started with the first joint session in the afternoon with the opening ceremonies and breaking up into committees. Then there was a pizza dinner and an evening session. The kids did love to swivel around in the plush chairs on the senate and house floors. They got two hours of free time in the motel, they especially liked the pool, before roll call.

Sunday morning a newspaper was available at breakfast and then on to committees and afternoon was for floor sessions. There was a continental breakfast at the motel and for lunch students were on their own to eat at the food places close to the Round House. That evening was the Governor's ball with DJ and the kids could could enjoy themselves.

As a sponsor I had to watch an exit and make sure no one left the building. Not an easy task. Then I had to check on my students with a room call at 11:00pm. Security guards kept watch after that.

Monday morning there was another newspaper, the final floor session and the governor either signed or vetoed the passed legislation. The position papers were presented and the verdicts form the Supreme Court reported. Then the tearful goodbyes.

In the summer of 2000 I sponsored four students to YMCA's Council on National Affairs. This was the position paper portion of Youth and Government. It is held yearly at a YMCA camp in Ashville, NC. We flew from Albuquerque to Dallas and met up with the students and their sponsors from Oklahoma and Texas. We then got on a bus and drove from Dallas to Ashville. We had a stop in Meridian, MS to change bus drivers.

At midnight we stopped at Vicksburg, VA and ate at a Taco Bell. Blew my mind that I'd travel all that way for Mexican food. We passed through Atlanta just as the sun was rising and missed the morning rush hour. It was crazy driving all that way with fifty kids and ten sponsors.

From Tyler, TX all the way to Ashville the scenery never changed. It was like being in a tunnel with nothing but trees on both sides of the highway. I was writing Optimus: Praetorian Guard and it gave me the time to write the entire siege of Jerusalem, civil war and Vespasian becoming emperor.

The four students had a great time, none of their papers were adopted, but it was a great learning experience for them. It was a long drive back and flight home, and I was exhausted for having only sat around and watched them doing all the work.

You seem to really enjoy your hobbies! :)

Here is our Top Ten Tuesday.

I've never heard of plastic canvas, but you make it sound like a fun endeavor. And look at all you have done in politics.

"What we make is great as Secret Santa gifts, though once the person gets it the Santa isn't much of a secret." Haha. Sounds fun! Happy TTT

I know how that is. I spend tons on yarn for knitting, and it is not a hobby for making cash, that's for sure!

Yes I do, Astibe. Thanks for coming by.

Lydia, it's better while watching TV than snacking.

Thanks for your kind comments, Deb.

Savannah, we are in agreement.

I'm not into politics that much, but my best friend is. It started out as a hobby for her and then turned into a job as well. It's nice you're dedicated to it.

I don't think I knew of plastic canvas, but it definitely sounds like a fun hobby.

Your craft hobby sounds like lots of fun, especially with the rest of your family joining in!

Glad your friend got a job out of it, Deanna.

Thanks for coming by, Lindsey.

It is Lisa. Thanks for coming by.

I've never heard of Plastic Canvas! It's always nice to find a hobby the whole family can do together. :)

Yes it is, Dedra.