For some reason Blogger has gone buggy with my fonts. Sorry for the sloppy sizes.

Ian Flemming's 007 movies introduced the world to a formidable actor. James Bond movies have been a part of my whole life.

I never went to the theaters to watch the Connery Bonds. My parents weren't interested and didn't deem them appropriate for pre-teen sons. I watched them when they came on TV. For the time period they stretched the censorship boundaries, but are so tame by today's standards.

We now have every Bond DVD and always add the latest. Every year between Christmas and New Year we marathon Bond. One year we'll go from Dr. No to the end, or start with the latest and go backwards. It's like an archeological dig through technological time.

There's been a number of debates and polls on who was the best Bond. By and large Sir Sean wins. He's my wife's favorite. He's not mine. For me he ranks 3rd.

NOW HERE ME OUT!

Connery set the tone and style of Bond. He looked fabulous and his facial expressions captured his feelings. His acting was superb and he delivered great quips. But those quips were always under his breath.

Here's my take on the movies: 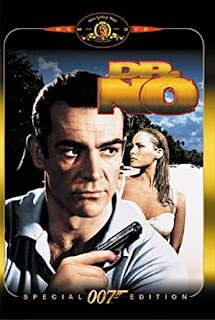 Dr. No: The prototype. No distinctive opening song, no naked women in dark shadow. It does give us the famous line of, "Bond, James Bond." And of course him busting into his hotel room with gun drawn with camera angle under the long gorgeous legs of Miss Trench while putting. Later there's the rising of Ursula Andres in a modest bikini. By the time I saw this on TV it was after seeing Annette Funicello in a bikini, and Ursula wasn't that big a deal for me. We're introduced to Moneypenny and M. Then a change of gun making him use a Walther PPK.

When he gets to Jamaica he meets Felix Lighter of the FBI, and the bad guys try to kill him. They use a tarantula while he's sleeping and it's clear it's on a pane of glass and not on him. Special effects are very rudimentary. Dr. No tells him about SPECTER as the international criminal organization. The usual bad guy telling all, thinking Bond will die.

There is an interracial pairing with an Asian woman, but that's not considered to happen until Live and Let Die for some reason. They have the decontamination process down well, as well as a quick nude flash of Andres, now Mr. Skin has captured it.

There's the first nuclear accident caused by Bond and being stranded on a boat for the final reward. 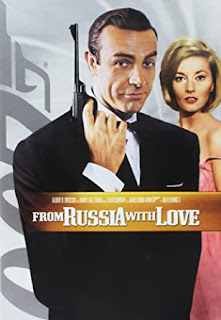 From Russia With Love: Of all the movies this follows the book the closest. Why does the posters of Bond's gun always have the long barrel when it's never that way in the movie?

It has an opening title song, but flashes from the first movie for the opening credits. The usual banter with Moneypenny, the first gadget being a booby trapped brief case, and the introduction of training in weaponry, though this was with the bad guys. An old pro in the spy game as head of Turkey's secret service shows him the ropes then a gypsy girl fight and the love scene that's being filmed to blackmail MI6 and Bond.

There's the grabbing a the decoder from the Russian embassy and leaving on the Orient Express, and the flight back to Venice. Again rushed and jerky. The shooting down of a helicopter by a .22 pop gun is ridiculous. The fight with Kleb and the poison tipped shoes was interesting at the time. The quip was under his breath, about her getting her kicks. 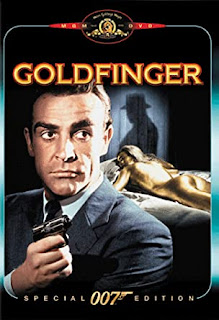 Goldfinger: The best of Connery's Bonds. The formula is coming together. Great song by Angela Bassett, what a car! They're still using it. The gadgets. A great one liner about the Beatles and earmuffs. Of course the best line ever delivered by a bond villain.
Bond: Do you expect me to talk?

A formidable henchman named Odd Job, and his flying hat that kills little girls. Pussy Galore, one of the great names for a Bond Girl, and her flying circus that 007 can convert with a single kiss. She joins him in foiling Goldfinger's plans to explode a nuke in Fort Knox, and the showdown with Odd Job and saving the day with 0.07 left on the timer. 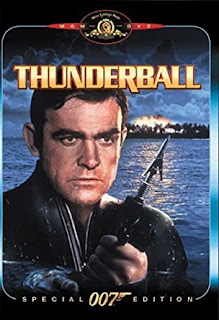 Thunderball: His most popular movie and the formula is complete. The nude dancers in shadow for the opening credits. Tom Jones singing the theme song. The toy breathing apparatus and locator beacon for his shoe. Finding missing nukes. There's was a fixation on nukes in Bond films. A sexy damsel in distress wearing bikinis, a femme fatale to sleep with, and an underwater battle finally stopped by sharks.

This is the only one where Bond doesn't have a last roll in the sack. Instead they're rescued by a skyhook.

I won't review Never Say Never Again, as it's the same story, but Kim Basinger was a much sexier Domino in this one. 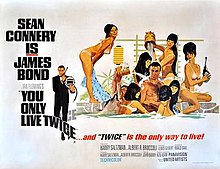 You Only Live Twice: The one that made Connery walk away. It's just awful. The formula is there, the opening credits, song, flirting with Moneypenny. Blofeld is introduced. SPECTER is grabbing space ships from the U.S. and Russia to start a world war. The special effects are atrocious by even that days standards. Making Bond Japanese and giving him a wife to find the hidden space base is bad enough, but it is the the stupid count down. "Ten minutes and counting, nine minutes and counting..." Stick a fork in my ear why don't ya. 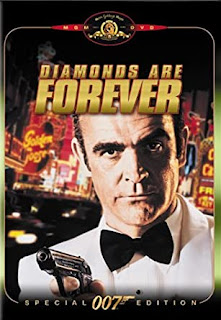 Diamonds are Forever: George Lazenby bombing as 007 in On Her Majesty's Secret Service, brought a reluctant Connery back.

It starts with Bond hunting down Blofeld and finding the man duplicating himself in mud baths. That's just weird!

You've got gay henchmen going around killing everyone and they have the funny quips. Jill Saint John running around in bra and panties changing wigs, then in bikini showing a little too much hip for Blofeld.  There's a great car chase scene with cops going in circles around Las Vegas, riding out with a Moon Rover with cops in three wheel ATV's falling over in the dunes. Jimmy Dean as a fake Howard Hughes. Lastly a really awful countdown, ten times worse than the previous one. I want to strangle the monotone droning voice every time I see the movie.

So who do I think is the best Bond? Roger Moore. He's much funnier with a dry wit and doesn't say them under his breath. The fight scenes are better staged. His first Bonds were good to great. The Spy Who Loved Me  and Octopussy, are my favorites.  Moonraker and View to a Kill are the worst movies in the series, horrible direction, weak plots and bad acting by others. Roger did his best with what was given him.

Second Place is Pierce Brosnan. He has the wit, athletic ability and the stories are much better.

Brace yourself, I think this is my longest comment ever. :)

In my opinion, the best Connery Bond film is From Russia With Love. It feels more like a a serious Cold War spy story than the others. The funny thing is, I didn't like it when I first saw it. I thought it was boring, but it grew on me. I also have a fondness for Diamonds Are Forever, not because it's especially good but because I saw it when I was 11 and developed a crush on Jill St. John.

I agree with you that Connery is the third best Bond, but I differ on the others. I like Daniel Craig and Timothy Dalton. All three in my opinion have this toughness to them that makes them seem like guys who could plausibly have been spies. I do like Roger Moore as an actor, but the plots of his films were so over the top.

Strangely, I don't like Brosnan himself as 007--in my opinion, he looks too much like a male model for me to take him seriously as a secret agent--but I do agree the plots of his films are some of the best. I think GoldenEye is my overall favorite Bond film. (I know you're not a gamer, but GoldenEye was also the inspiration for one of the most famous and influential video games in history.)

I never noticed that about the gun barrel on the posters before, but you're right. What gets me about the posters is that Bond always has his finger on the trigger even when he's not firing it, which is the first thing any firearms safety instructor will tell you to NEVER do. :)

A lot of why we like this Bond or that has to do with what age we were when they came out. Roger Moore was Bond while I was in high school, college and just married. The villains were mad scientists wanting to blow up the world to start over. Just as you developed a crush on Jill St. John, and she was a nice piece of eye candy, I fell for Barbara Bach in Spy Who Love Me. That dress at the club is still a wow in my book.
I've liked Daniel Craig, and Eva Green in Casino Royal is by far the sexiest of the whole series, but he's not witty. With Dalton and Craig Bond became too serious. Connery, Moore and Brosnan were more tongue in cheek and played it cool. Glad to get you to express yourself here.

I love all the Bond movies but really I don't watch them again unless they come on television.
Goldfinger was my first. I saw when I was in grade school.

It was the first one I saw on TV too, Yogi.