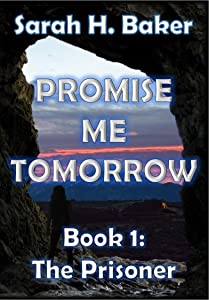 Sarah H. Baker is a local author and fb friend. I'm always happy to read her books. Promise Me Tomorrow Book 1: The Prisoner, is a post apocalyptic romance. A kind of taming of a barbarian.

New Village is a struggling enclave on a plain near a forest. Kole is the protector and he's out with the children gathering fire wood when a group of outsiders come out of the forest riding Wolfhorses. A horse with a wolf face and large fangs. The first glimpse that this is an after a nuclear war world and there are mutated animals.

The village is attacked and much of their food is stolen. A number are dead and many injured. One of the raiders, a woman, was injured and left behind. The villagers want to kill her. Kole takes her to his house and has the village healer tend to her wounds, after he's tended to the villagers in need.

For most of the story Kole has to defend the woman from the villager's wrath while helping her fit into their society. He's a widower with two children and still mourning. This strange woman as she wears his dead wife's clothes brings up painful memories.

Shylah is puzzled by Kole tending to her and feeding her. She comes from a valley that is a dog eat dog society. The strong take what they want and use others to their own ends. As a woman she's been used by the strongest male, but has scars all over her body from fighting to eat. She thinks of the villagers as marks, the children as mutts, and she expects to become a slave.

She expects her people to return for her, but plans her escape.

Kole treats her with kindness and reassures her she won't be harmed. He even tells her when her wounds are healed she's free to leave. The problem is that the forest is lethal at night as wolves, wild boars, wild cats and bears feast at that time. Those who died in the raid aren't buried they were laid in the forest for the predators to consume. Kole lets her know she wouldn't survive one night.

Shylah had to learn some manners especially when eating, and it wasn't easy getting her to take a bath and put on women's clothing.

The rest of the story Kole and Shylah develop a respect and the budding of love is formed. He begins to teach her how to read and tells her of how the world used to be before "The Beginning."

Kole takes her and a few others to visit the old city as they need more tools and weapons to defend New Village from another attack by the outsiders.

Old city turns out to be the ruins of Denver. They encounter the outsiders. Shylah is faced with the dilemma, does she go back to her old life or help Kole and New Villagers.

This is part one of a new series and it is excellently written and compelling.

Sounds interesting; I will check it out. Nice review.