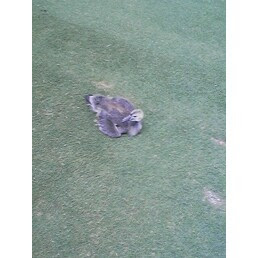 Went out to golf today. On the tenth hole we picked up a follower: a gosling with just a hint of chick down on the head. It followed us for nearly the whole back nine. It did break off at the first water hazard we came across and then followed the team behind us. The only problem we had with it was on the greens where it kept getting in the way and we had to shoo it away.
We had a nice group of curmudgeons last night at the Isotopes game. The 'Topes lost 15-3, but it was nice to see each other and get caught up on things.
Looks like I'll be going back to work as a legal assistant for a couple of months. So much for the retirement. The money will come in handy.
Posted by P M Prescott at 4:07 PM

Yes, it will come in handy. Reminds me of the lines shared by Steve McQueen and Ben Johnson in "Junior Bonner". Johnson looks at Steve knowing he needs a loan and says "Money?" Steve says, "Well, you know is no friend of anybody". Plus as I've opined, you're too young to retire! :)