These are some books I've enjoyed lately: 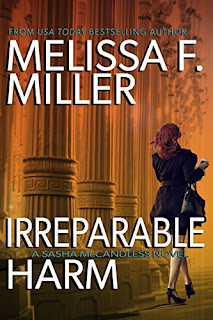 Irreparable Harm by Melissa F Miller. This is the first book in a legal thriller series with Sasha McCandless. She's half Russian and Irish, five foot even and weighs a hundred pounds of Krav Maga trained dynomite. She also works at a prestegious law firm in Philidelphia and is assigned to defend an airline when one of their planes crashes into a mountain.
The story is full of insights into the Olympian world of high class lawyers. One insight I loved was: First year lawyers are like gold fish, when one dies you flush it and get another.
Sasha gets involved with an Air Marshal trying to figure out how someone was able to control the plane and fly it into a mountain by remote control. She meets Leo Connolly when he holds a gun on her and she gives him a broken nose, and a broken trigger finger when she yanks the gun away from him.
All the reader can do is pity the poor thugs sent to get a file of information they think she has and live to regret it. It's a fun read. BTW the law firm she's working at is Prescott & Talbot. 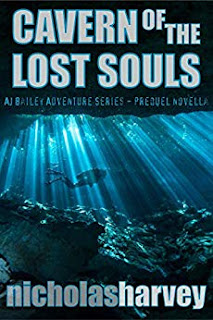 Cavern of the Lost Souls by Nicholas Harvey.
This is an intriguing story. There's not much dialog in the beginning, but it's captivating. Jonty Gladstone is a scuba diver that loves to explore underwater cave complexes. He makes a big mistake while on a dive, he doesn't have a spare mask when the one he's using loses its lens. He finds his tether line is broken leaving him blind and lost. He can get above the water line, and he has to find his way out before dying for lack of water and food with what air he has left in his tanks..
AJ Bailey is just starting out with a boat to take  tourists out and dive the reefs around Grand Cayman Island. She hears about a diver reported as a missing person and gets talked into trying to find him.
This is a simple survivals story, but it keeps you captivated the whole way. It's listed as book 0 in the series as a way of introducing you to AJ in the next books. 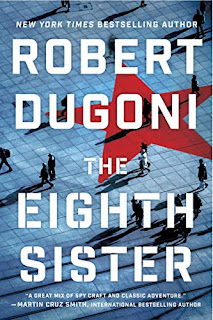 The Eighth Sister by Roger Dugoni. First in a series on former CIA operative Charles Jenkins.
This starts as a regular spy thriller. Twenty years after Jenkins walks away from the CIA he's roped back in because some Russian agents are being killed. Someone is selling their names and he's sent into Moscow to try and find the traitor.
His cover is blown and a Six foot five inch African American is trying to hide in Russia while attempting to escape.
The second part of the book is after he makes it back home. He's the arrested for being the traitor. Naturally there's no record of his having been sent on the mission. This turns into a legal thriller as he figures out who the real traitor is and trying to prove it.
The book keep your heart pounding and adrenaline flowing at the climax of each part. It has an unusual twist at the end.

ahmed said...
This comment has been removed by a blog administrator.
11:08 AM

P M Prescott said...
This comment has been removed by the author.
3:01 PM