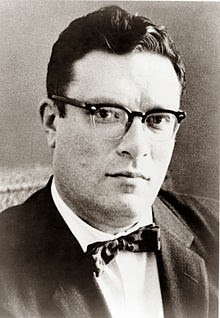 I'm working on the second book of my Fan Plan series and won't be starting from scratch on  novel for Nanowrimo. Thought instead I'd say a few words about my favorite authors instead.

Isaac Asimov born Isaak Yudovich Ozimov; c. January 2, 1920 – April 6, 1992) was an American author and professor of biochemistry at Boston University, best known for his works of science fiction and for his popular books. Asimov was one of the most prolific writers of all time, having written or edited more than 500 books and an estimated 90,000 letters and postcards. His books have been published in nine out of ten major categories of the Dewey Decimal Classification.

The first book by Asimov I read was one of his history books: The Greeks: A Glorious Adventure. I was in 6th grade and loved history books, still do. He wrote a number of easy to understand histories. Two on Rome, Britain, the Near East, The Old Testament and New Testament.
I wasn't aware of him as a science fiction writer until 9th grade. A friend of mine shared his copy of Nine Tomorrows, and I've been a big fan of sci-fi ever since. After I finished the Lord of the Rings that summer I started reading The Foundation Trilogy I followed that with I Robot and unfortunately graduated from high school. In college I had too much other reading to do so I put sci-fi aside.
Returning from graduate school, going through a long and painful divorce and no job I had time on my hands and was used to reading around 500 or more pages of theology a day. There was a little book store across from a park by my parent's house named Trespasser's William run by a wonderful lady named Gwen Shultz. I would sit with her and talk sci-fi though most of her books were children's. We both loved Asimov, who that's ever read sci-fi doesn't?
I joined the Science Fiction book club and bought a number of his anthologies, the subsequent Foundation books, but it was his compilation books that opened and even wider range of sci-fi for me. He edited the Hugo Awards books, Before the Golden Years a compilation of stories from his childhood that made him the writer he was, and a few others. I also got a subscription to Fantasy and Science Fiction magazine where he had a monthly column on hard science.
His book Beginnings and others were a compilation of those articles. He was just an amazing writer and the world was truly blessed with his works.

P M: That is a lot of pages to read in a day! The only person I personally knew who digested 500 pages a day was a former girlfriend, who was in Law School!

Michael not only 500 pages, but of law or theology which is horribly boring and dry. At the time I could read 1500 pages of fiction in the same time. I also used to be able to run ten miles a day in around an hour. Those times are long past.