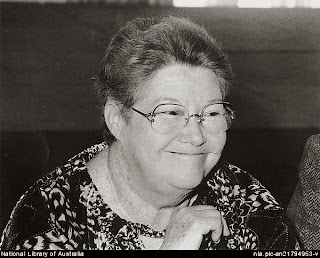 Colleen McCullough was born in Australia. A neurophysicist, she established the department of neurophysiology at the Royal North Shore Hospital in Sydney, then worked as a researcher and teacher at Yale Medical School for ten years. She is the author of the record-breaking international bestseller The Thorn Birds as well as eleven other novels, and lives on Norfolk Island in the Pacific with her husband.

Yes I read the Thorn Birds and enjoyed it, drooled over Rachel Ward in the mini-series, but that's not why this great lady influenced my writing. Without her Optimus: Praetorian Guard wouldn't have been written.
I stumbled upon her book The First Man in Rome in Don's Paper Back Exchange. You take in a sack full of used books and walk out with a handful of other used books for less than a buck. It wasn't far from where we lived at the time and it kept Mom, Dad, wifey and me in hog heaven reading wise.
Looking over the book I noticed a large appendix in the back so I read it before starting on page 1. I recommend this for all of her books in this series. It is the best primer on Roman culture I've ever read, and I've read a lot about Rome. She has a diagram of what a toga looks like flat to get it to drape the right way. A list of Latin curse words, names of places in that time like Lundinium for London. It's worth buying the book for just the appendix.
There are seven books in this series: The First Man in Rome, The Grass Crown, Fortune's Favorites, Caesar's Women, Caesar, The October Horse and Anthony and Cleopatra.
Book one is about the rise of Marius in the time of the Divine Julius's grandfather. Marius is the first man to totally dominate Rome politically and become The First Man in Rome. In other words he ran the Republic. The Grass Crown is about the rise of Sulla and the civil war between Marius and Sulla. Fortune's Favorites deals with the young Julius Caesar as a child and what a mine field it was to survive the animosity of Sulla. Caesar's Women is about Caesar working up the Cursus Honorum, the political ladder to become a senator and then Consul by the time you're thirty and his fight with Cato. It is amazing how much this book mirrors our current political squabbles. Caesar is a fascinating account of the time Caesar was in Gaul and all the fighting to subdue the area. This book is a much better read than Caesar's Gallic Wars, while staying true historically. The October Horse is about Caesar's death. I haven't read Anthony and Cleopatra yet, but it's on my list.
I've seen the BBC's I Claudius and HBO's Rome. There is a hunger concerning this time period. A network could create a daily soap opera using these books that would have much better viewership than the tired and worn ones my wife and daughter watch because it would be different and exciting.

A side note about the Grass Crown, The Roman Republic was against any form of kingship, such as gold of silver crowns. Their crowns or coronas were made out of plants. Laurel leaves for victors in the games, Oak leaves for someone who saved a comrades life in battle and the victorious general after a battle would be given a grass crown from the field of battle stained with the blood of the dead. This was the highest crown they could give. It made the general Imperator, the word that has become Emperor. Think of Jesus on the cross. The crown of thorns was a way of ridiculing him, but it was still a grass crown and he conquered death by rising from the grave.

So much of what I learned about Rome from these books was used to flesh out my story. It was in a Sunday School class we were studying the book of Acts where Peter had his vision about unclean food and was sent to convert Cornelius of the Italian Cohort. From reading these books I knew that Cornelius was a very common last name in Italy because Cornelius Sulla picked up lots of clients during his war with Marius and all his clients took on his family name of Cornelius. I also knew that the Italian Cohort was made up of Italian Allies of Rome, the Sabines, Samnites, Greeks from Neapolis (Naples) and all of them would return to Italy after their tour of duty. I was planning on writing a book about one of the Apostle Paul's guards while he was awaiting trial in Rome because Christian tradition holds that his guards had to be replaced every two or three weeks because he converted them. What clicked in my mind was a connection between my guard and how close the Empire came to having a Christian Emperor in the first century. I needed a way for my protagonist to have an in with Domitian's family. From this I created Lucius Cornelius Judeaus, the son of the Cornelius mentioned in Acts who then marries his sister to Optimus. Truly without reading these books my first  novel would still be nothing but research.

What a post. I start out reading about one of your favorite authors and then jumped into some interesting Roman Culture information.

Your book is one of the best I have ever read.

Yogi my book rests on the shoulders of these books.