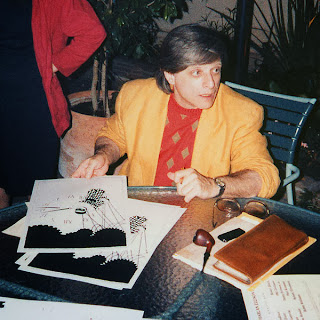 Going through my divorce and devouring as many books as Gwen Shultz recommended I discovered Harlan Ellison. It was a collision of perfect timing. I was hungry to read, deeply depressed with plenty of time on my hands and Harlan Ellison was having a Renaissance.
In reading Asimov's anthology of the Hugo winners I read Ellison's story Repent Harlequin, Said the Tic Toc Man. It was interesting, but as with a lot of the winning stories I wasn't impressed.
Gwen recommended Death Bird Stories. This book has a warning to not read it in one sitting as the stories are too disturbing. The first story blows you out of the water. Whimper of Whipped Dogs. Using the media circus about the murder of Kitty Genovese in New York where numerous people watched and did nothing, now called bystander syndrome, Ellison weaves a tale of a vaporous inner city god calling people to worship. It is mind blowing to anyone, but for someone coming out of a year of seminary and horribly depressed a surprising thing happened. It lifted my spirits. The next stories in the book gave words to the feelings I was experiencing but couldn't describe. I subsequently discovered Ellison was on his third or fourth wife. If anyone would know what that feels like he would. I know it sounds weird but reading very depressing stories lifted my depression. I wouldn't recommend this as general therapy as it could deepen another person's depression.
I read everything I could find of his over a summer. All of his books were being reissued at that time but you could only find them at a bookstore across from UNM. Since we lived near there that wasn't a problem. A side note my novel Human Sacrifices is influenced by Whimper of Whipped Dogs. Stephen King writing a forward to one of Harlan's books said that reading Ellison made you write like Ellison.
Dad was an ex-Marine so we kind of avoided the "Hippie" and "Anti-war" thing. Besides at my school the hippies wanted the money spent on athletics diverted to classroom instruction and were against JROTC. I ran track and cross-country and was enrolled in AFJROTC. I turned 18 the last year of the Vietnam Draft. My birthday was 76 in the lottery. I received notice that they were drafting that year to 75, but if anything happened they would draft up to 100. My freshman year of college I was under the sword of Damocles. It made me look at options. I concluded if I was called up I would go.
I said that in preamble because in 1977 I read Ellison's The Glass Teat and The Other Glass Teat. Compilations of essays published in The Los Angeles Free Press (Freep) critiquing television. Ellison critiqued everything. Mostly diatribes against the Vietnam War, support of Civil Rights and vey much anti-Nixon and Agnew. These books were finally being republished after Vice President Spiro Agnew ordered the first publisher to burn them. The publisher even gave Ellison the publishing rights back and no one would touch the books until after Watergate. My political views didn't change that much, but I realized how much the general public and I was deceived by the government and horror of horrors, maybe the hippies were right.
When I started teaching 7th and 8th graders in English I discovered very quickly that you CAN'T TAKE YOUR EYES OFF OF THEM FOR A SECOND! Fortunately I have an excellent memory and instead of reading to the students I started telling them stories. (when most of your students can't read past 3rd grade the biggest problem is not word recognition it is visualization. Being read to helps them see the action of the story that reading it themselves doesn't) The trick is to find stories that interest boys, girls not so much as all books written at this level are purposely designed for them. Just try to publish a Youth book with a male protagonist and brain yourself on the brick wall. J.K. Rowling nearly died on this brick wall, but look what happened when the boys in England started reading about Harry Potter.
Back to my point. One of my favorite short stories by Ellison is Along The Scenic Route. Its about a married couple on a Sunday drive that gets bullied by another driver and they enter a legally sanctioned highway duel with machine guns and lasers. For years I would run into former students working as waitresses, fast food restaurants, student teaching, fellow teachers. They all told me that the one thing they remember from my class was that story.
I could write even more about his television impact: Star Trek: City on the Edge of Forever, Next Generation: Far Point, Outer Limits: Demon With a Glass Hand, Alfred Hitchcock Presents: Memos From Purgatory, The New Twilight Zone: Shatterday
The cult classic movie A Boy and His Dog.
Nuff said.
Posted by P M Prescott at 9:04 AM

One I turned of age they had stopped drafting the year before. My lottery number was 16. Everybody else I knew was 1H, I was 1A. There was no danger of getting drafted of course but it did make me feel strange at times.

Sometimes I think the stalemate we have in government now is in some part due to the duplicity of LBJ and Nixon way back when.

We just take it for granted that our government lies to us.

I agree Yogi, the agreement Nixon signed was offered the first year he was in office. The number of lives lost while he dithered is a crime.