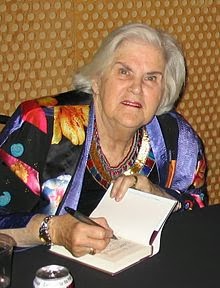 Anne Inez McCaffrey (1 April 1926 – 21 November 2011) was an American-born Irish writer, best known for the Dragon Riders of Pern science fiction series. Early in McCaffrey's 46-year career as a writer, she became the first woman to win a Hugo Award for fiction and the first to win a Nebula Award. Her 1978 novel The White Dragon became one of the first science-fiction books to appear on the New York Times Best Seller List.
In 2005 the Science Fiction and Fantasy Writers of America named McCaffrey its 22nd Grand Master, an annual award to living writers of fantasy and science fiction. She was inducted by the Science Fiction Hall of Fame on 17 June 2006.

If you haven't read the Dragon Riders of Pern, stop right now go to Amazon.com or another book store on the web and download the first book Dragon Flight or get the whole trilogy with Dragon Quest and The White Dragon. The money, time and energy you spend reading them will be well worth it. You'll also then need to read the Harper Hall Trilogy that runs concurrent with the Dragon Riders, who are the aristocrats, while the harper books deal with the common people who don't ride dragons, but own fire lizards.
I remember when I gave my sister, who was in high school at the time, Dragon Song, after she finished the book she said, "I want a fire lizard."
Known mostly for her Dragon books, she also wrote hard science books like the Ship Who Sang in a series of books known as the Brain and Brawn Ship Series, where space ships have human brains partnered up with a pilot. Another series of books The Crystal Universe where all interstellar communication is done from crystals found only on one planet. Killishandra Lee is the singer who cuts the crystal and these are fascinating books. Notice McCaffery infuses her stories with singers something most writers omit.
In the 35 years since we've been married I've found one of the few writers I can read to my wife that she enjoys is Anne McCaffrey. Over those years we've shared the Dragon books, Crystal books, some of her Brain and Brawn Ship books. This lady's stories anyone will love if they take a couple of minutes to start reading her.
I'm currently reading the first in her Acorna series and enjoying it like all the books I've read by her.
After I saw the movie Dragon Heart and saw how realistic the CG animation was able to make a dragon I thought Hollywood needs to start filming her Dragon Riders books. I call for an international outcry that these books be turned into movies just like Tolkien's Hobbits and Lewis' Narnia Chronicles.
Posted by P M Prescott at 1:00 PM

I'm not familiar, but all the more interesting to learn about a writer!

Michael, you have got to read her dragon books.