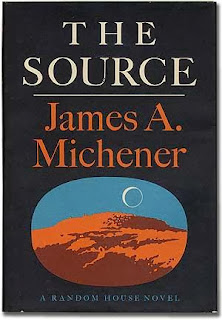 James Albert Michener  February 3, 1907 – October 16, 1997) was an American author of more than 40 titles, the majority of which were sweeping family sagas, covering the lives of many generations in particular geographic locales and incorporating historical facts into the stories. Michener was known for the meticulous research behind his work.
Michener's major books include Tales of the South Pacific (for which he won the Pulitzer Prize for Fiction in 1948), Hawaii, The Drifters, Centennial, The Source, and Poland. His nonfiction works include the 1968 Iberia about his travels in Spain and Portugal, his 1992 memoir, and Sports in America.

Of all my favorite authors in this series I started reading Michener first. I didn't finish that first book until fifteen years later. It was his book The Source. Everybody bought this book in 1962 when it first came out. It is still in print to this day!
For those not familiar with this book, it is the craziest book ever written. It starts off with archaeologists in Israel starting a dig on a small mound between Acre and the Sea of Galilee. For the first hundred pages or so you learn how archaeologist work, what a Kibbutz is, are introduced to a host of characters, a summary of the book of Deuteronomy and a number of artifacts they discover. Then it changes, starting with the oldest artifact Michener writes a short story set in the time period of the artifact weaving a tale about a family changing from living in a cave as hunter gatherers to building a house and growing crops. The wealth of information concerning the historical significance of this major shift in human history is mind boggling even for a twelve year old who at that time wanted to grow up and be an archaeologist. Years later when teaching World History The Bee Eater, was of all the stories from this book that fascinated my students the most, and I was effortlessly able to explain what a huge change for humans transitioning from tribal wanderers to civilization.
I read about on-third of the book and got bogged down in the short story set in Byzantine times. Squabbles between Christians over Christ being flesh and not spirit as well as nitpicking Jewish Rabbis beginning the Talmud made me put the book away for many years.
I picked it up again in college to discover many more fascinating stories. I have spoken to many people from my parents generation and mine about the book and it is almost universal that they say, "I started the book, but didn't finish it." I'm not the only one who bogged down on the short story The Law.
In-between the short stories the archaeologists discuss the artifacts, which in almost all cases I found distracting, with the exception of Cullinane's comparison of two Crusader kings. Saint Louis and Frederick The German. Louis is held up in history as a great king even though he never won a battle and saw army after army slaughtered. History remembers him for his strong faith. America even has a city named for him.. Frederick on the other hand after landing in Acre negotiated a peace that lasted for a hundred years and upon leaving with his army was jeered and had pig guts dumped on him. Does that kind of remind you of the hatred directed at Kennedy for negotiating a peace with Russia on the missile crisis and SALT treaty compared to the adulation of George W. Bush for starting two meaningless and stupid wars that have taken a heavy toll in lives and wealth. But just listen to the howls, wailing and gnashing of teeth because Obama negotiated with Syria on WMD's and now with Iran.
Sorry to go on at length on this book, but in my opinion it is the one book everyone in the world should read to understand world history and apply it to what's happening today. Skip the one story on the law, unless you're really into Jewish Talmudic scholarship.

While the kids were little and as a teacher I had lots of reading time after teaching summer school. I read the complete Harold Robbins one summer so the next summer I thought I'd read everything by Michener. It took me all summer just to finish one of his books. When computers came out and I started writing short stories and novels my goal of reading the total tome of Michener bogged down.
I did like Alaska, Poland, Texas, Chesapeake, The Drifters, but some of his later books felt like he'd run out of story ideas. Michener started writing at age forty and published for fifty years. Quite an accomplishment.
One tidbit I read in an interview. His first book after he was discharged from the Marines after WWII was Tales of the South Pacific. He walked through a small muddy village in New Guinea that was named Bali Hai, he thought the name was beautiful and put it his book. The book was turned into the
Broadway musical South Pacific with Bali Hai one of the most memorable of songs.
Posted by P M Prescott at 9:36 AM

The Source was my first Michener book. My Dad bought it for me in 1976 after he came back on a business trip and I read it over Christmas break. I loved it. I read the whole danged thing. I went on to raead almost all of the books you mention. I especially loved Chesapeake.
He did run out of gas when he got older. I remember reading Mexico which was a lost novel that he took up again years later. You could tell which page it was lost.

One book of his that I wanted to read and tried several times was Iberia.

PM: A friend of mine once sat next to Michener on a flight!

Yogi, I didn't make it through Iberia either. A little too much contemplation for me.

My favorite story in the Source is Twilight of an Empire, it covers a pogram and how corruption destroys all productivity of a people.

Michael, how lucky for your friend.