Cadillac of the drive-in 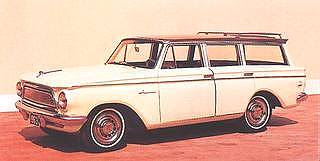 The third car I learned to drive was a 1963 Rambler American 330 station wagon. The way it worked was that Mom drove the Pontiac to work and back, Dad drove the Rambler, Bruce and I fought over who would drive the Olds, he usually won that argument since he was a Senior and I was a Sophomore.
The Rambler was a standard shift and Dad picked me up the summer between 9th and 10th grade at driving school. He took me out on a dirt road (this was before Albuquerque exploded in population growth) and I got my first lesson in how to use the clutch. It took me ten minutes to strip all the gears and Dad had to drive home in reverse. 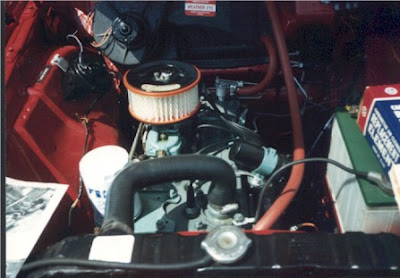 It had a cast iron flathead 6 cylinder engine that was about as easy to work on as any engine ever designed. It got 100 horse power which was plenty of pep, but not drag racing fast.
Bruce bought his first car. Mom and Dad traded in the Olds and Pontiac on other cars and I inherited the Rambler Spring of my junior year. This was the best car in the world for dating, especially going to a drive-in movie. Keep in mind this was before head rests. AMC introduced the split seat that had adjustable backs. In fact they would go all the way back to level with the back seat. At the drive in you could drop the front seats and that created a nice comfortable space to enjoy your date. Mom really hated this feature.
The summer between my junior year and senior year I worked as a bus boy at Sears in their coffee shop (yes they used to have such things). Almost every penny I made went into fixing this car. I replaced the shocks, the water pump, tuned it up, new tires and was ready to go. School started, I quit my job to run cross-country and track, which as everyone knows is a bad place to be -- all systems go.
Saturday, Sept 4 1971 I was on my way to pick up my girl friend to see a movie. A car ran through a red light hit me on the back left tire, spun me around like a top. He spun one way I spun off the other. I had to get out the passenger door as the drive door was jammed and the bastard that hit me took off.
He snapped the axle and if the grill of his car had not caught between the car and the tire he'd have flipped me over. (No seat belts I wouldn't have walked out in one piece). My only injury was a bruised knee cap that hit the emergency brake handle.
Bruce was a Police Aide at that time and by sheer coincidence was OJT in the "hit-and-run" department. He saw that my case wound up on top of the pile. They found the car that hit me a couple of miles away, but the driver was long gone. They traced the car to a man who had taken a .45 and blew his brains out in the car two weeks before I got hit. The car was given to his ex-wife who left it on the street, in summer, without cleaning it out, and someone stole the car. The gal's brother had a two page arrest record and if you connect the dots most likely was the guy who totaled my car, but since I couldn't make a positive ID that's as far as it went.
On record I got hit by a dead man.
The insurance company paid off on the blue book value, which wasn't much. Mom gave that money to Bruce to buy his car so he could buy another one.
My Rambler station wagon was replaced by a '62 Rambler Classic sedan (it also had the front seat levels with the back seat feature), but it needed lots of work that I didn't have money to fix it up with. 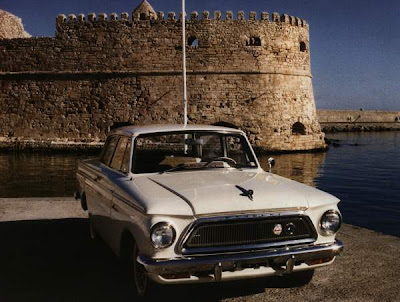 You left the part out that we fixed the 62 sedan up so you had something to drive. Our only mistake was selling it when you went to college instead of letting you take it with you.

Haven't gotten that far yet.

P M: My Dad owned a 1965 Rambler Classic. Having studied the Hudson-Nash/Kelvinator merger to become AMC I remember them as quality cars. I would have loved to have seen the AMC merger contemplated with Studebaker-Packard. Had it nor been for George Romney after George Mason's sudden death, I believe this would have happened. You had a strong, quality engine there! An overall strong car to be struck that hard, and thank God you survived! Today, that might be different. We lead the nation in intersection fatalities in Phoenix! Wonderful series here. Please keep it up!!!!

Those cars were built sturdy and that one held up well. Today's cars are much safer because they fall apart absorbing most of the impact and have seat belts, air bags and other safety features.