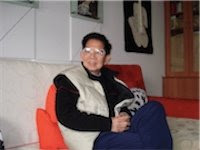 Scott Horton has an interview with Sha Yexin a Chinese author and dissident. It is an absolute must read for the entire interview, but the most clearly articulated and informative answer I had to copy here. He is answering in the context of China's totalitarian state, but it so perfectly applies to the eight year reign of Der Decider aided and abetted  by the mains stream media who only reported the talking points given to them by the government, when they should have been holding them accountable.

Why shouldn’t one write for power? Here are my reasons:

First, power corrupts. The British historian Lord Acton said: “Power corrupts; absolute power corrupts absolutely.” This famous quotation has now become political common sense. Its correctness has been borne out by the intensifying corruption in China, where power is exercised without oversight or restraint. When corruption and power exist in co-prosperity, how can people fight corruption? In present-day China, anti-corruption is kept at a certain level to ensure that people will not revolt while power will not get out of control. In some districts, corrupt elements have become leaders of the anti-corruption effort. Undiscovered corrupt officials are fighting those already exposed.

Second, power makes people stupid. By using mathematical theories, the American scholar Jonathan Bendor proves the great value of independent thinking and the limitations of decision makers. When leaders are too busily occupied with myriad state affairs, institutional methods can be used to ease their cognitive constraints, by seeking wise solutions from among the people and encouraging independent thinking in government officials. But in a totalitarian country, such institutional methods do not and cannot exist.

Most power-holders in such countries are fond of dictatorship. Each of them puts forward his “ideas” and “theories” when it is his turn to rule the country, hoping to see his thought adopted as the “guideline” to unify the thinking of the whole nation. Acting in this way, they deprive themselves of the kind of wisdom and talent that are needed to solve the thorny problems facing the country. As a bunch of dumbbells, they can not help becoming an object of ridicule among the people.

Third, power brings flip-flops and hence suffering to the people. Since power has reduced the wisdom and intelligence of the power-holders and their think tanks, setbacks caused by repeated policy changes including the adoption of reactionary measures are bound to occur. Frequent ideological reversals and repeated changes in ideas and policy bring about great social instability. It becomes very difficult to attain a truly harmonious society and avoid more flip-flops in the future.

Fourth, power produces cruelty. Those who hold power can be overwhelmed by the glare of the spotlight that accompanies power. They may experience a peak period in which they feel accomplishment, happiness, or pleasure. But according to Abraham Maslow, the American psychologist, this peak period does not last long. The powerful had problems coping with the end of this period. Once they reject oversight, checks and balances that come from outside, they immediately become completely irrational and inhuman. If someone wants to share power with them or seeks to replace them with new power-holders, they become mad and cruel, and have no scruples in resort to guns, cannons, and tanks, producing huge social disasters.

If you are a writer who writes for power, objectively you are working, directly or indirectly, for corruption and stupidity, for more suffering and cruelty for the people. You may have some excuses if you are forced to write for power. If you write for power out of your own will, how can you evade your responsibility as an accomplice?

As may be easily understood, what I am speaking about is power in a totalitarian state. It is power without oversight and constraints, as compared with power born from democratic elections. Refusing to write for power also means refusing to write according to the will of those in power, or to promote their ideology in one’s writings.