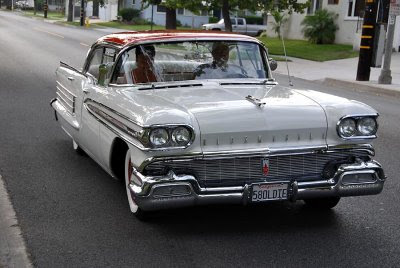 When I was fifteen we were eating at a restaurant across the street from a used car dealership. After dinner we walked across the street to look at the cars and came across a pink '58 Oldsmobile Super 88. When Dad asked how much the guy said $100. Taking it out for a test drive the first thing we noticed was that it had a really powerful engine. The only real problem was that the odometer was stuck. Dad bought it. About a month later we took a trip down to El Paso. When we got to the motel and Dad added up how long it took to get there, he figured we averaged over a hundred miles an hour. The one thing about this car was that at a hundred mph you didn't know you were going any faster than 40. It only got ten miles per gallon, but when gas only cost forty cents a gallon it wasn't too bad.
This was the car I learned to drive in. It had a 398 four barrel V8 engine and that car could move. When I did the driving test to get my licensee I thought I was doing a great job, then as we were on a residential street the inspector asked me how fast I was going. 40 in a 25 zone. He asked me why I was driving so fast, what you would call an oops moment. Getting in he told me that speeding on a driving test was an automatic failure. Ever have that sinking feeling? He was  nice enough to pass me so I got my license.
The car did have a few problems. It would kill a battery every six months and it always seemed to die as I was getting ready to go out on a date. I'd be all after shaved, and dressed up, go out and the damn thing would not start. The heater got stuck and you could not turn it off, the only good thing about that was that the heater finally died in March before it got too hot outside to drive it with the heater on. I did race a bit with it making everyone driving those mustangs and camaros wonder how I could keep up with them. One time I had the whole cross-country team in it driving up I-40 and to show off I ran it up to 120. I didn't go faster than that because at that point it would hydroplane. When Dad got home late that night he walked into my room and asked me when I was going to put tires on it. I said I didn't know it needed tires (I was seventeen, give me a break here) he took me out to look at the tires. They weren't bald, they had cord showing through. To this day I wonder why I'm alive. 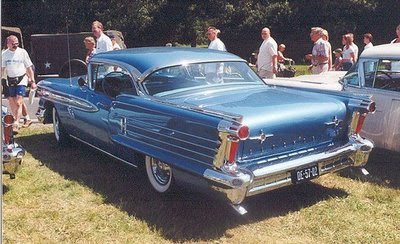 Now you tell me all these things. Do you remember sleeping on the trunk of that car. You would kill your kids if that did those stuipd things.

I think that was Bruce.

This car was really my oldest brother's era, P M but I have heard that 398 V-8 and it was a beauty. The body on this car reflects (to me) the unbridled passion of the design team with so much imagination! I loved this post!!

It was a fancied up version of the 57 chevy, but the looks hold up to this day.