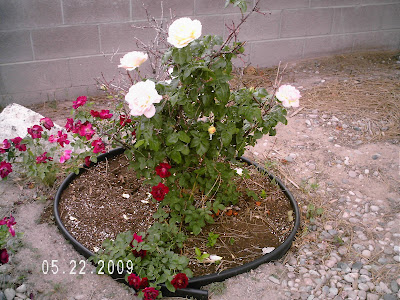 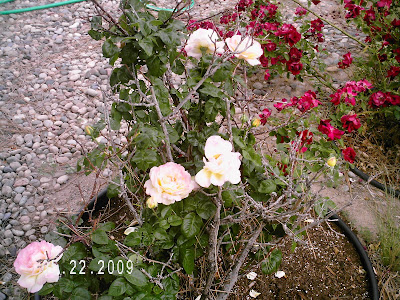 I have this rose bush in my front yard. It's always been a real scrawny thing. The other bush is an American Beauty and is huge, putting out hundreds of flowers from May to November. This bush has never been very big and usually only puts out one or two flowers a year.
I've babied it using rose food and fertilizer for fifteen years and that's all it's ever done. About two weeks ago as the other bushes were starting to bloom this one looked dead.
I was contemplating digging it up so I found a couple of rose bushes at Big Lots and I bought a big bag of potting soil. I planted the two new bushes in the potting soil in a planter to get them going and thought I'd move the one that survived (a real nasty wind storm happened a couple of days after I put them out) in the place of the poor dead bush.
E dumped what was left of the potting soil on top of the bush I intended to dig up and in just two days it came to life. I've taken six roses off of it and there are five already in full bloom with six more ready to open. I must have scared it, or it just needed potting soil instead of miracle grow.
It's bloomed more in the last week than in over ten years. The reason I've worked with the bush is that it has gorgeous flowers. A light yellow with red tint and around three inches in diameter.
Posted by P M Prescott at 7:04 PM

I noticed the rose. It looks like the one you father babied on the sidewalk median on Hermosa. I loved that rose it starts out a creamy color in its bud state, as it opens out the edges of the pedals are a soft rose color. I don't know the name of the rose but your picture of Liz Taylor does it justice. You know Liz and I are the same age her birthday is February and mine is June. I think Rose's birthday is June also.

My mother continues to grow roses to this day!