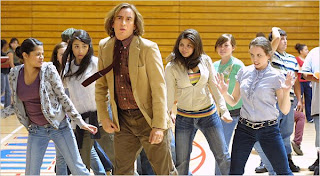 Looked at the online New York Times today, like everyday, and they had a review of the movie Hamlet 2 which is being released today. I recognize a number of students dancing with the film's main actor in my school's gym. It was filmed here last school year, and for the most part was a very good experience for the school and community. The production made numerous improvements to our facilities, used our students as extras and were as unobtrusive as could be. The review of the movie is rather neutral, not praising, but not dissing too much either. For me when I get around to seeing it (don't go to the theaters much when in six months it'll be on satellite) the joy will be in seeing extras that are faceless and just background to everyone else, but they mean something to all those around here.
Posted by P M Prescott at 9:36 AM

I can imagine! But remember, p. m. that there is something cool about being in a theater with the "Big Screen"! A great post!!!

True, and we do go to the theater for some major releases.