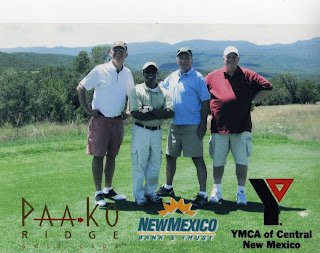 These were the three guys I was paired up with for the golf tournament today. They took pictures of all the teams on the first tee box. You can see the Eastern slope of Sandia Mountain in the background. Of all the golf courses I've played it has the most magnificent setting. The tournament was a four man scramble (you play from the best ball hit out of the four so it speeds up play). Out of 47 teams we came in dead last. We got $25 gift certificates at the course pro shop. I picked out two coffee mugs with the course logo on them. It might be a backhanded compliment, but hey at least it was something.
It was overall a really fun day, though it was hot and long.
There was also an auction with all kinds of donated stuff up for bid. I bid on a nice woven basket of African artwork. It was filled with a wooden beaded knecklace (gave it to Grinnygranny), bamboo windchimes hanging from a coconut, a zebra mask, a giraffe mask, two wooden spears (about two feet long), a copper wall plate with a lion on top of a gazelle in relief, wooden salad spoon and fork with giraffes on top and two small wooden spoons with giraffes on top, and a multi-colored linen sheet with braided ends. The masks and copper plate should look nice on the wall of my classroom. The other stuff will be nice to show, but the spears I'll have to leave home. I'll have to figure a way to put them up on the wall so the toddler can't get to them.
Posted by P M Prescott at 9:06 PM

sounds like fun, even in last place! :) Which one are you?

I'm the one on the right.