WC Favorite Quote from a book 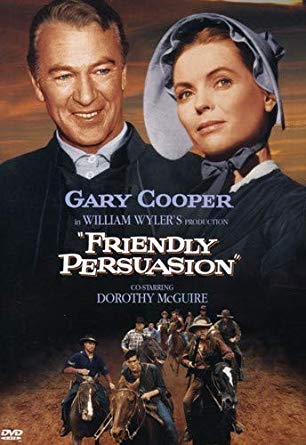 I'm deviating from today's topic. Friendly Persuasion is a book by Jesamyn West that was turned into a movie. For a more indepth review check out Berthold Gambrel's on his blog.

The problem of making the movie was that the book didn't have enough conflict, at least not the type of conflict movie goers would expect. They added the conflict of Josh, the oldest son leaving to fight against the Rebel Raiders. It is here that the greatest quotes come.

Josh has left, Jess is chopping wood when his best friend Sam Jordan and Friend Purdy ride up. Both are carrying guns.

Purdy tries to get Jess to join them in fighting the raiders. Jess refuses. Purdy then says, "War time changes things."

Sam Jordan then says, "War changes things, but you haven't. Last week you told my son he's going to hell for fighting and today you tell Jess he has to fight. Whatever's right for Purdy has to be right for everyone else."

Nothing sums up the Evangelical thought process more completely than this statement.

Later the horse Josh took comes back without him. Jess gets his hunting rifle and starts to leave to bring him back. While going to the horse he tells his younger son, Little Jess, "Thee's the man of the house now."

Little Jess says, "Kill a Johnny Reb for me."

Jess leans down and places his hand on his son's shoulder. "Son, never says that about another man's life."

This is the true meaning of the phrase "Sanctify of human life."

These are both excellent quotes!

Excellent quotes, especially with all that's going on right now.

Good choice. I remember the film, but I think I need to go back and read the book.

Same with me, Michael, it's been a long time for the book.

Great quotes. They really do capture a line of thought.

Good quotes, and thanks for the link! :)

I'm glad you were touched by these, Echo.