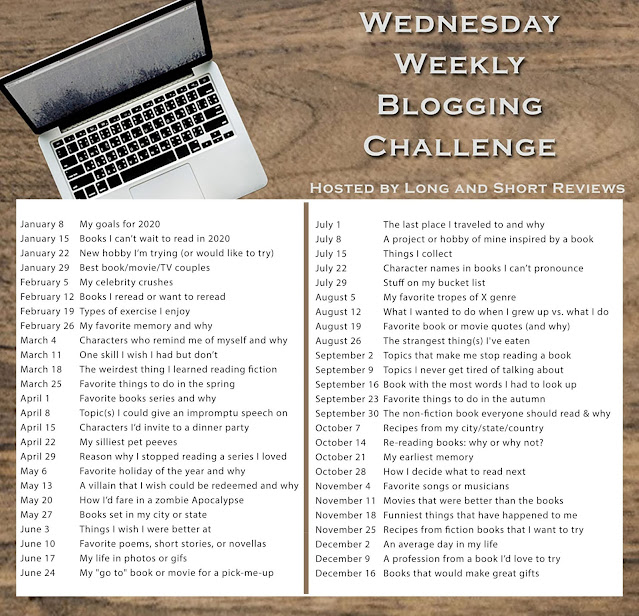 Today's challenge is my earliest memory. 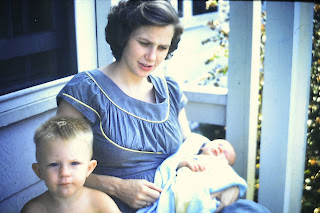 Picture taken the day I came home from the hospital, Mom and my brother.

This is coming at a touchy time. My mother recently passed away. I've spent the last few days going through 88 years of pictures. They've stirred up memories long dormant.

I've come across pictures of my family at the beach in California. I was about three years old. I vaguely remember seeing the water and being overwhelmed by how big it was. Mom and Dad teased me growing up that I cried and cried when leaving because I wanted to take one of the doggies home. For some reason they didn't want to have a seal for a pet. Dad would always laugh and say when we went over the rise from the parking lot that I said, "Look at all that sand."

I remember going to my Dad's parents house and my grandmother would hug us and give us candy. She wore a blue polka dot dress. Every time I see a dress like that I think of her. She passed away the next year and now I'm coming across pictures and it's like I'm reconnecting with her.

Dad mustered out of the Marines and we moved to Colorado. Where Mom and Dad grew up.

I found pictures of the house in Pueblo, I was four and my brother would leave for Kindergarten and I was lonely without him. I'd sit on the porch and wait for him to come home so I'd have someone to play with. That spring I was in the front yard watering the grass. The mail man walked up to the box and said "Don't spray me."

What a stupid thing to say.

He knocked on the door and cussed my mother out. She called his supervisor and he was forced to come back and apologize. You didn't mess with Mom. 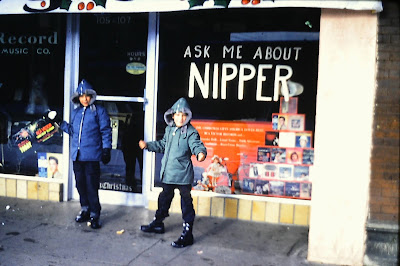 My other grandparents owned a business. The Record Music Company. It sold stereos, records: 331/3 and 45's. Band instruments and there was a repair room in back with guys soldering electronic parts to stereos, radios and such. We would come in the back way through the repair room and there was always a table with donuts. Mom would never let us have one.

The picture is of my brother and me in front of the store. Nipper was the RCA dog that looks down the speaker of an old gramophone, which is their logo. If you bought a TV you got a stuffed Nipper.

When Grandpa first got color TV's we'd go to the store and watch Bonanza on Sunday night in color.

Grandpa gave us one, when he had enough in stock, and we'd invite all the kids in the neighborhood to watch cartoons on Saturday mornings. We were popular in school, until they talked their parents into buying one.

I also remember bundling up in parka, mittens and overshoes to walk to school. It gets cold in Colorado. I remember that every time I see A Christmas Story.

A discount store opened up in Pueblo. They could sell TVs retail cheaper than the store could buy them wholesale. My aunt and family kept it going for another twenty years off band instruments and selling Elvis, Beatles, Beach Boys and other pop 45's and LP's, but two families couldn't make a go of it.

In the summer of 1962, President Kennedy came to Pueblo to sign the Frying Pan/Arkansas bill. Dad was big in the democratic party and he took my brother and me out on the football field and had us sit down right in front of the roped area before the podium where Kennedy would speak. He went to do political stuff. We had Secret Service agents to baby sit us. When Kennedy spoke we couldn't see him because we weren't tall enough. Couldn't hear him either, the speakers were farther back.

The next year we moved to Albuquerque.

Those are memories until I was ten.

Thank you for sharing your memories, especially the ones of your mom. It sounds like you had a nice childhood. :)

Those are great memories. I'm sorry your mother passed, but at least you have good memories of her. ((hugs))

What treasured memories! Thanks for sharing, Patrick. I'm sorry to hear of your mother's passing. My mom is 87 and each day I have with her is a treasure.

What wonderful sweet childhood memories. Thanks for sharing! Here's mine.https://www.tenastetler.com/my-earliest-memory-lsrs-wednesday-weekly-blogging-challenge/

That's a fascinating collection of memories. My earliest memory is here.

Your kind words are appreciated, Lydia.

Mary, it's nice you treasure her.

I'm sorry to hear your mother passed. Those are wonderful memories.

Thank you for your kind words, Tanith.

Great memories--the picture of you two in snowboots, and those parkas with the zipper that divided the hood into a big collar! My brother wore those. Being a girl I didn't get one--I loved when I was "allowed" to wear one to sled. I like the list,too, of weekly posts.

Glad I brought back some fond memories for you, Lisa.