Today's topic is top ten things that scare me.
I've read all of Poe, and only The Fall of the House of Usher gave me a scare.
I never found Anne Rice's vampires and witches and mummy entertaining, but not scary.
I'm not into ghosts and vampires or zombies. These are some things that scare me.

Chainsaws: In college I worked at a meat packing plant in Plainview, Tx. working the graveyard shift. I made a round through the plant once an hour, it took about ten minutes, the rest of the time I spent in a guard shack and could study. I was the only one there.

Wife and I went to see Disney's Bambi at the only theater in town. It was packed with kids. The previews came on and they ran the teaser for the Texas Chainsaw Massacre. That night I had to walk past meat hooks and large grinding machines. There were all kinds of machines that made crashing noises and of course the hogs that would be butchered in the morning and all their noises. What scared me the most, was the fact that I was living in Texas. I've had to use chainsaws, even own one, but every time I look at it it reminds me of a movie I've never even seen. 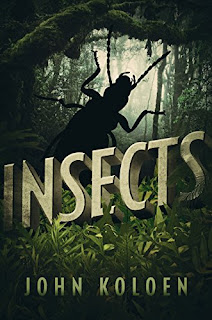 Insects.  I came across this series of books by John Koloen and read the first one. Large cockroaches that crawl down your throat and up your anus to eat you from the inside. Did not read the sequels.

Monster fish: Watched an episode of River Monsters. Jeremy Wade was trying to find the largest catfish in the Amazon. He heard about a man brought in half in and half out of one of the monsters. The local doctor told him there was another fish much worse. It was a fish with a round mouth about an inch to two inches long. He autopsied a man who looked like he had a gunshot wound in his chest, but when he opened him up he found the inside of his body empty. One of this fish bit through his chest and then many of his friends joined in through the opening and cleaned him out. I've thought about what would happen in the Southern United States if that fish was set loose.

Mountain Lions: I was working construction on the East side of Sandia Mountain way back in the day. We were installing a septic tank. My buddy with the backhoe had dug the leach field and dropped in the gravel. He went to get more gravel and I was raking what he'd dropped in the trench. I looked up and spotted a large dog walking about four hundred yards from me. I thought it was a Great Dane, but it was walking way too smooth for a dog. It dawned on me it was a mountain lion. It kept going on and I stayed still and hunkered down in the trench until he was out of sight. I never want to be that close to one again unless its at the zoo.

Eighteen Wheelers. Nearly had a head on collision with a semi doing 80 mph once. Topped a hill on a two lane road, and there the monster was trying to pass a slower car. I went into the ditch and got stuck in the mud. Shook for ten minutes before trying to figure out how to get back on the road. For some reason if I'm on the freeway and there's one on the right and another on the left, I always have to pass them at the same time. When it's windy that can be scary as they are swaying back and forth.

Donald Trump: The ultimate nightmare is he gets re-elected. If he loses, the real horror will be the time after the election and he leaves office. A madman with nothing to lose with the nuclear codes.

Mountain lion encounters can be scary!

Greg, once was enough.

Too many scary things!

LOL to that last one. I'm afraid you're right though.

I couldn't agree with your list more! Especially the last one. *Shudder*

You just terrified me with the last one! GREAT Post!

LBC, yes they are scary.

It was my pleasure, Lydia.

Lisa, some things are scarier in real life than in books.

Yup, that last one is terrifying! But I'm also easily creeped out by anything related to bugs -- I definitely won't watch or read any horror that focuses on creepy-crawlies!

I hadn't really thought about 18 Wheelers and chainsaws before, but they are freaky! And I'm with you on Donald Trump.

I really hate bugs too! Here is our Top Ten Tuesday. Thank you!

Wow, all of these are scary. And that meat packing plant sounds like the stuff of horror stories, for sure!

Lisa, the one was enough for me on that series.

Deanna, glad we think alike there.

Poinsettia, so do I.

Berthold after that night I put in for the swing shift. I was much happier because the night crew was there.

Shannon @ It Starts at Midnight said...

I love your list because I agree so much (especially about that last point!), the real stuff is so much scarier than stuff you know can't hurt you!

Definitely a lot of terrifying things here! I can't even imagining settling in to watch Bambi and having an advert for The Texas Chainsaw Massacre come flying across the screen ... especially in front of all those children!

My mouth fell open at Insects and the cockroaches YIKES!

I know, Verushka, just the thought is creepy.

Christopher, I think there were a lot of complaints about it, since then the previews are rated and only shown with a like rating.

All scary things! I live in Texas, and Texas Chainsaw Massacre is a big Halloween hit here. But the last one is definitely the scariest! :)

Dedra, I didn't even want to see the first one. Thanks for coming by.

Sarah @ All The Book Blog Names Are Taken said...

Chainsaws and trump scare the bejeezus out of me.

You and me both, Sarah.